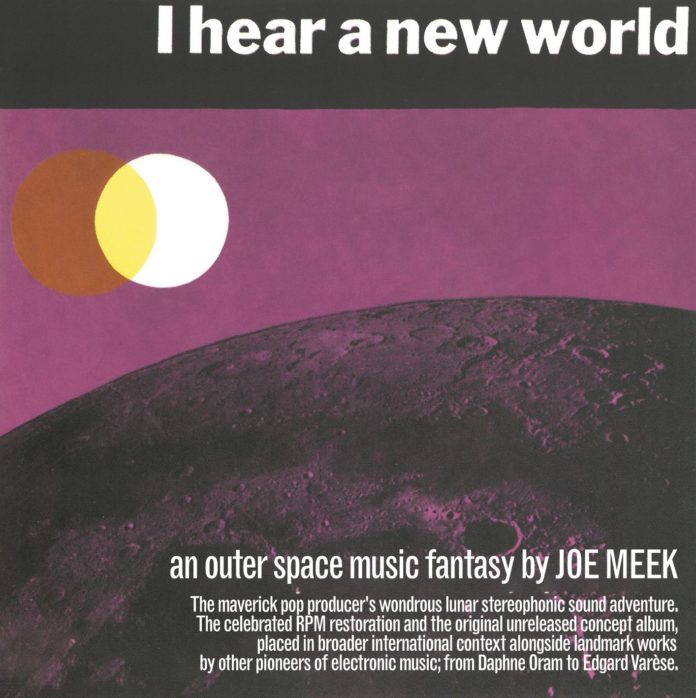 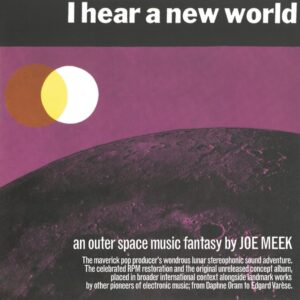 Subtitled “An Outer Space Music Fantasy” and “The Pioneers Of Electronic Music”, the aim of this new collection seems to be to position Meek’s work in context with other early exponents of electric sound. This set features the original and unreleased at the time 1960 version of his proto-concept album plus its 1991 restoration and pieces from such luminaries as John Cage, Delia Derbyshire and Karlheinz Stockhausen. Ian Canty blasts off into the outer reaches of the cosmos…

Joe Meek couldn’t play an instrument and certainly couldn’t sing (the proof of this is in his own vaults, where on demos he can be heard warbling well out of tune), but he had an extraordinary gift for creating sounds with electrical equipment and a real thirst for experimentation. Born in Newent, Gloucestershire during the years between the World Wars, he began tinkering with radios and transformers during his childhood, quickly becoming fascinated with the potential of these electronics in the creation of music. His built his own radio transmission equipment and also had an interest in drama, using his technical knowhow to help him stage his own productions to entertain his siblings (with varying results).

Stints in the RAF as part of his national service and with the Midlands Electricity Board in Civvy Street honed his interesting in recording and also more esoteric pursuits (UFOs and trying to record sounds from the hereafter). He left the MEB to become an audio engineer and continued his drive to push forward innovations in music, often with the source artists not being aware of what was being done with their material.

When rock & roll hit big, Joe had found his niche and as the 60s dawned Meek launched his own imprint, Triumph. Though actually scoring a few hits including UK Top Tenner Angela Jones by Michael Cox, the label only lasted a few months before going bankrupt in June 1960. Not having access to the same distribution network as the majors played a part in its demise, but also Joe’s volatile temperament caused problems too. He was a troubled soul who lived with bipolar disorder and schizophrenia in less understanding times and these mental health issues would lead to his violent end in 1967. He was also scared that news of his homosexuality (which was still deemed illegal back in the early 60s) would get back to his family, something which did absolutely nothing to arrest his rapidly growing paranoia.

Despite this setback he managed to shrug off the failure of Triumph and cast a long shadow over pre-Beatles UK pop. Telstar by the Tornados in particular was a massive international hit, something which had a clear predecessor in a Triumph EP that was credited to Joe Meek and the Blue Men two years earlier. But it should have been so much different.

I Hear A New World never saw the light of day back in 1960 in long player form, the reasons for which are shrouded in mystery. Which is a shame as it could lay claim to being one of the first pop music concept albums. The title track, which only really consists of phrases/notes being repeated thrice at differing speeds, is brilliant in its simplicity and execution. It was also curiously touching too.

If you really listen to this record you can hear ideas that may have had some influence, consciously or unconsciously, on the likes of Devo, Kraftwerk, the Residents, Neu!, David Bowie and many others in the future. Some of the bits and pieces are clearly but cleverly reworked from pop and country things Meek had in the bag already, giving a familiar feeling to the oddness. By using echo, distortion and speeding up they became something quite different. By all that cutting and spooling and above all copious amounts of reverberation, they emerge in a new form, as modernistic musical odes to outer space. Sampling little bits and overdubbing them, plus those sped-up “Pinky and Perky” voices which sounded out and out spooky, all of which made for something which had no real precedent in pop at least.

For me, it is slightly problematic putting Joe’s work alongside two and a bit discs comprising of other composers/artists from around the same timeframe. I can see the idea of wanting to pinpoint his position in the realm of early electronic music, but it is difficult to see who this set is aimed at. Perhaps instead he would have been better off just presenting the two versions of I Hear A New World alongside the Triumph sessions recordings that were released by RPM back in 1994, which would make more sense.

Though a rather cumbersome fit, I generally applaud the notion of setting Meek’s outer space fantasy in a more experimental context, away from where it could have been regarded as a mere pop trifle. The first disc here kicks off with the 1991 restoration originally issued by RPM. This was a boon to Meek fans at the time, but it’s topped off here by the original unreleased 1960 version, taken from an acetate. There is a buzz about hearing the LP as the creator intended and the tracks do seem to naturally flow this way, making for an improved listening experience.

The spaceship bleeps and Max Wall march of Entry Of The Globbots is great fun and Glob Waterfall is a finely judged mood piece, all crashes and bangs and watery squelches. I can hear a bit of Cluster in the “schoolroom” piano, and the heart-breaking melody of Valley Of The Saroos is lovely. Love Dance Of The Saroos could be a dry run for Telstar, where Hawaiian guitar plays off an otherworldly skipping rhythm. Valley Of No Return ends I Hear A New World on gentle note, one that is somehow both sad and hopeful. It’s an album full of emotion, despite the lack of human voice.

If anything of similar vintage has to share space with I Hear A New World, something by the BBC Radiophonic Workshop would be a good shout and various of their bods complete this disc. Maddalena Fagandini’s Time Beat, a jaunty interval signal, probably has most in common with Meek and Delia Derbyshire’s Time On Our Hands is a classic of early electro with a sci fi theme. For the large part the nine bonus tracks make for a nice counterpoint to Meek’s strange vision.

The other two discs feature artists and composers from all over the globe, working mostly in isolation, but occasionally teaming up. Tom Dissevelt’s proto-Kraftwerk Syncopation is an eye opener and Fantasy In Space by Otto Luening has a direct link with Joe Meek via the title – being recorded in 1952 was it an influence on him? Both well ahead of their time, just like on the three long pieces also from the pre-rock & roll years, which dominate the middle of disc two.

A quarter of an hour of Oliver Messiaen’s Timbres Durees flies by and sounds a bit like something Cabaret Voltaire might knock up over 20 years later, and the duo of Herbert Eimert and Robert Beyer throw a load of warps, bleeps and buzzes into their Sound In Unlimited Space. Karlheinz Stockhausen was of course a big hitter in this field and he does not disappoint, filling his Studie Nr. 1 with drones, electronic pops and bounces plus a thick layer of eerie atmospherics.

The final disc of this set doesn’t quite reach the standard of the first two, but does have a few good selections. Generally comprising musique concrete, where found sound has as much currency as music or perhaps even more. A good example of this is like on the “sound gallery” of opening track Edward Varese’s Poeme electrconique. John Cage’s Fontana Mix has elements of that style and the use of silence and quiet moments as part of composition is key here. The only real deviation is Luciano Berio’s harsh Momenti For Magnetic Tape, which is a welcome and very industrial deviation.

Though containing more than its fair share of interesting sound, this set is indeed a bit of a curate’s egg. Hardcore Meek fans will probably pass as they will more likely than not have the LP already and perhaps may not be interested enough just get the same tracks in the original running order. The other stuff, though showing the development of electronic recording and innovation, in truth doesn’t have much more than a vague crossover with Joe’s work. People who are into Stockhausen/Cage etc will maybe baulk at a whole disc given over to what they might see as a pop producer’s whimsy.

Which I suppose just leaves oddballs like myself who love Meek’s daft vision and are also eager to hear in the other material important precursors of post punk industrial noise and electronica. I would have liked a bit more about I Hear A New World’s production and history in the sleeve notes, but the other artists are profiled well and on the whole the collection has been well put together on the back of a novel enough idea. There is no doubt the work of Joe Meek sorely needed positioning in the firmament of electronic music’s most innovative names. This boxset at least achieves that and also give us his most coherent long form statement as it was meant to be heard and that is something to be truly thankful for.