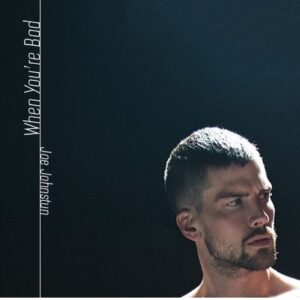 Joe Johnstun is another Twitter accost that i have listened to and fallen in love with. Johnstun is only 26, but has a well travelled, yet somewhat dysfunctional upbringing that started from US/Slovakian parents, born in the Philippines, raised around Asia and is now living in Guadalajara, Mexico, working various jobs to give me him the time and freedom to create.

Johnstun’s ‘When you’re bad’ track is basically Johnstun with a guitar, and as he puts it, “various (clumsily programmed) synths on the record”. Although the mastering was done by a ‘good friend’ Adrian Stubbs, “the track could very much be described as a bedroom as a studio thing”. You would not know though. The production on this single is accomplished, big in its scope and just great!

Well, however it was conceived and recorded, ‘When you’re bad’s intro and female vocal assisted build up is a really great start to the BIG sound that this track has. The change in tone and the quiet, held back vocals that are barely a whisper create such a great vessel with which to carry the inspired and heartfelt lyrics of “dance on the table, dressed like a lady, drinking and driving me crazy”.

And with the refrain of “you’re beautiful” ringing throughout the second half of the track, this tune really does get under the skin. And when all is said, this track as a debut? This is such a radio friendly track it hurts….This isn’t the last we have heard of Joe Johnstun by a mile.

Joe Johnstun can be found on his Soundcloud.