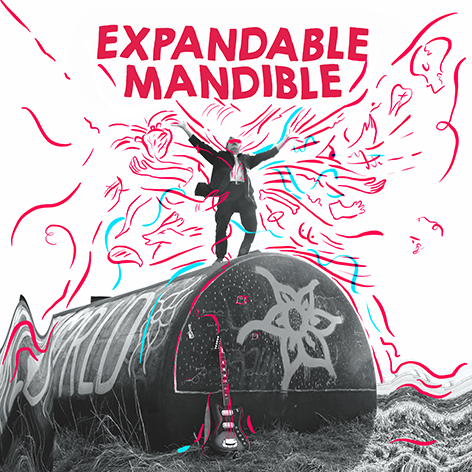 Joe Gideon (formerly of Bikini Atoll and Joe Gideon & The Shark) is a uniquely eccentric songwriter who has been faithful to his storytelling post-punk dance party muse for almost two decades. As the follow up to his “pithy, powerful, lyrically erudite” debut solo album ‘Versa Vice’ (2016, on Bronzerat Records), Joe Gideon has teamed up with two other musical originators – drummer/percussionist Jim Sclavunos (Nick Cave & The Bad Seeds/Grinderman/Sonic Youth/The Cramps) and keyboardist/saxophonist/vocalist Gris De Lin (Duke Spirit/Gemma Ray/Leila Moss) for a collaboration album that explores subjects ranging from the cosmic to the mundane through an ever-shifting kaleidoscopic prism.

‘Expandable Mandible’ is the first track to be taken from their as-yet-untitled forthcoming album, produced by Jim Sclavunos. Allegedly a true story about a guy Joe Gideon knows who has a weather-predicting prosthetic jaw, ‘Expandable Mandible’ is driven by a jagged groove and a single tense riff that unfolds and grows until it drops you off in the magnetosphere.

Check out ‘Expandible Mandible in the You Tube video, below.