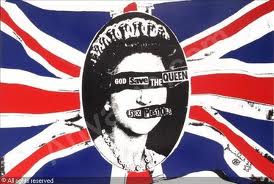 It could be argued this is the ultimate commemoration of the 40th anniversary of punk and the most expensive iconoclastic move of all time – Joe Corré – the son of Sex Pistols manager Malcolm McLaren and designer Vivienne Westwood – is to hold a ceremonial burning of punk memorabilia in Camden, in which he’ll torch a personal collection worth more than £5 000 000 in total.

Punk has now become so imbued with nostalgia that it feels like the Queen Mother of former youth movements. What was once firebrand now nestles in Boris Johnson’s record collection and the kind of venues that would have barred punks at one time embrace it as a cuddly eccentricty – venue the queen has sanctioned the 40th anniversary celebrations.

Corré, who is the founder of lingerie brand Agent Provocateur and the son of the controversial Malcolm has now decided to make stand. He will burn the collection in Camden November 26, the 40th anniversary of the release of the Sex Pistols’ ‘Anarchy in the UK’, in part in protest at the establishment-sanctioned nature of Punk London, which takes place later this year.

It throws up lots of questions – just what makes up 5 million quid’s worth of punk memorabilia? is that 5000 Anarchy singles? 10 000 pairs of bandage pants from Sex shop?

In a press release about his plan, Corré said: “The Queen giving 2016, the Year of Punk, her official blessing is the most frightening thing I’ve ever heard. Talk about alternative and punk culture being appropriated by the mainstream. Rather than a movement for change, punk has become like a fucking museum piece or a tribute act.”

“A general malaise has now set in amongst the British public. People are feeling numb. And with numbness comes complacency. People don’t feel they have a voice anymore. The most dangerous thing is that they have stopped fighting for what they believe in. They have given up the chase. We need to explode all the shit once more.”