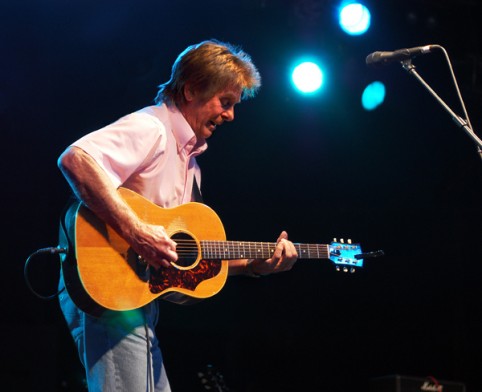 Joe Brown is back on the road again, Louder Than War’s Craig Chaligne caught his show on the penultimate date of the first leg of his 2016 tour in St Albans.

And it’s to a packed Alban Arena that Joe Brown came on at 7.30 sharp. The quality of his shows are legendary and he was very much preaching the converted on this evening. His formula mixing all different kinds of music plus a solid sense of humour (and a razor sharp wit) are a winning combination and if you go to one you’ll keep coming back. A rendition of the the “Deliverance” banjo duel featuring Joe and Richard Collins (three time winner of the UK banjo championships), showed how good a musician Joe is, a fact that is often hidden by his larger-than-life, cheerful chappy stage persona. His backing band composed of his son Peter on lead guitar, long time drummer Phil Capaldi, Mike Nichols on Double Bass and Richard on banjo and other instruments, a well oiled unit that plays with finesse. The first half of the evening dubbed the “Front Room Show” by Joe sees the band perform seated on the front of the stage with acoustic instruments (apart from a few parts courtesy of Pete on his  Alvin Lee Gibson 335). His latest album released in 2012 and billed as “The Ukulele Album” saw him cover a wide variety of songs ranging from ELO’s “Mr Blue Sky” to a a 1930’s Hawaiian song entitled “Hula Girl” and with some original material too (as Joe stated several times during the show he likes something different). Brown is no stranger to the Bod Dylan songbook (check out his excellent cover of “Well, Well, Well” that appears on his “Live In Liverpool” album and on his 2006 studio release “Down To Earth”). This evening the band offer us a cover of “I’ll Be Your Baby Tonight” from 1967’s “John Wesley Harding”. An excellent ode to Ukulele entitled “Tickle My Heart” co-written with his friend, the legendary songwriter Roger Cook got an airing. Joe’s band have a separate career as the New Grass Cutters where they play covers of non Bluegrass material in a bluegrass style. A rather splendid version of The Beach Boys’s “Good Vibrations” with all the harmonies spot on was showcased in the first half. Joe has always been a big supporter of Chas and Dave and includes a song by them in each of his shows (the “Diddle Um Song” in St Albans).  An old British song entitled “Home” was introduced by a story of how he found it in a case full of sheet music that had been left to him on the will of a nightclub owner in Dunstable. Two of his early hits closed the first half “That’s What Love Will Do” and “What a Crazy World We’re Living In”.

The second half was hit territory with some of Joe’s most famous songs. A sprightly version of “Henry The VIII” was followed by “Picture Of You” (“My one and only number one”). The band’s great arrangement of U2’s “Still Haven’t Found What I’m Looking For”was followed by George Harrison’s “That’s The Way It Goes”, a real gem a track from Harrison’s 1982 album “Gone Troppo” on which Pete Brown gives his own excellent version of George’s slide parts. The New Grass Cutters got their second moment in the sun with again a great version of a sixties classic, Jimi Hendrix’s very own “Voodoo Childe”. Each member had a solo spot with Pete singing one of his own compositions entitled ” Let Your Loss Be Your Lesson”. Richard gave a “rendition” (getting a gentle ribbing from the Brown’s for his posh choice of words) of The Beatles’s “I’ve Just Seen A Face” and drummer Phil Capaldi had his usual turn at an Elvis Presley cover (“King Creole”). Several of Joe’s live favourites were aired in this second half (“Souvenir D’Alavito”, “Hava Nagila, “Sea Of Heartbreak”) that closed with Joe’s very first hit record “Darktown Strutters Ball”.