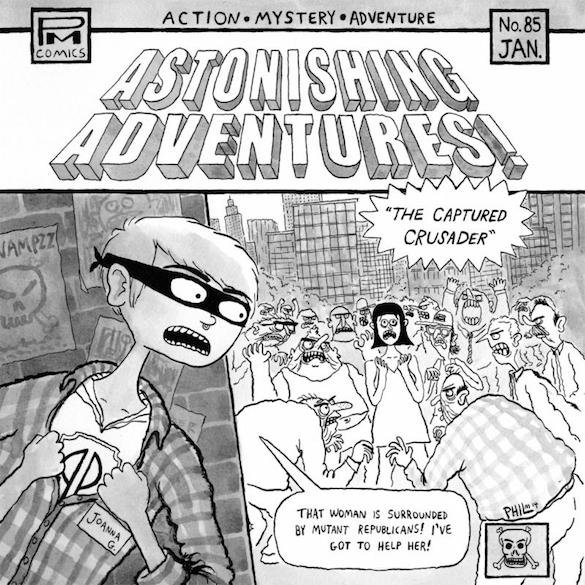 Two of our favourite modern day noise-pop-punk bands have joined forces to release what on paper looks like a simply awesome split 7″ EP (cover art above). Even better, it’s accompanied by a 24 page comic book featuring a composite character made up of the personalities of the vocalists from both bands, a character who kicks the butts of “misogynists, online trolls and haters everywhere.” For more details and to stream a track by both bands, carry on reading.

Last year we all fell in love with Joanna Gruesome’s album Weird Sister yes? And this year we’ve also all fallen in love with Perfect Pussy’s album Say Yes To Love right? Well we certainly did, as the two reviews whose hyperlinks are embedded in the album titles above prove. The two bands have just been on the road touring together and it seems while they were doing so they were hatching plans because just last week they announced a split 7″ featuring the two groups, one that comes packaged in a 24-page comic book, illustrated by cartoonist Phil McAndrew (brother of Perfect Pussy’s guitarist Ray McAndrew).

The 7″ is four tracks long and the bands have shared one track each off it with us which you can hear below. Perfect Pussy have done a cover of The Sugarcubes’ (hear it below) and a new ttack ‘Adult World’. Joanna Gruesome, meanwhile, have recorded new track ‘Psykick Espionage’ (hear it below) alongside a cover of ‘…And Keep Reaching for Those Stars’ by the 90s emo band I Hate Myself.

Side A: Joanna Gruesome

Side B: Perfect Pussy