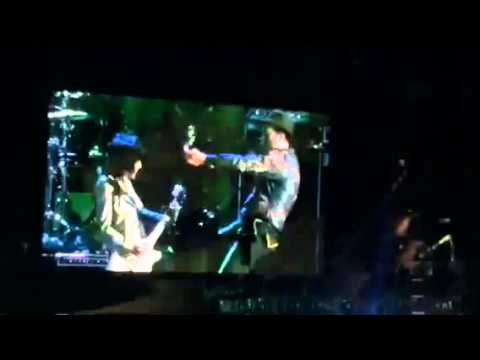 As a concept the rock n roll hall of fame is about as lame as it gets.

The motorway services of awards ceremonies that has long been a laughing stock in music but somehow sees itself as a headline event deigned to allow Nirvana into its hollow circle. Not sure how they missed them before- maybe they just heard of them now?

At least the gig looked like fun with Joan Jett rasping through great version of ‘Smells Like Teen Spirit’ and the band joined by other guests including St Vincent and Kim Gordon, joining Dave Grohl,  Krist Novoselic and late period Nirvana guitarist Pat Smear for a one off show.

The idea of using women to replace the late Kurt was a perfect nod to the band’s feminine touch and far better choices than some sweaty screechy bloke rocker for the event.

Kim Gordon joined the band for  ‘Aneurysm’, St Vincent for  ‘Lithium’ and Lorde for’All Apologies’.  Courtney Love was also there and was apparently nice to everybody including the band, so it was all smiles for once in the Nirvana camp.