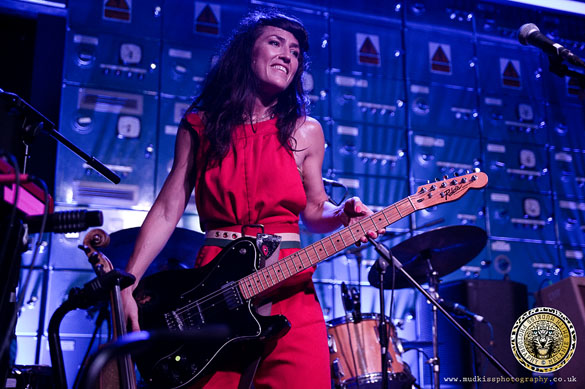 Photo of Joan as Policewoman above © Melanie Smith

Joan Wasser was Joan as Wonder Woman tonight. In her belted red jumpsuit and white fringed cowboy boots, long dark hair flowing, she looked the part. Her stage name references the actress Angie Dickinson’s best known role and they both share an androgynous beauty that’s attractive to men and women. Gorilla was packed with hipsters young and old, lived-in faces, hooded John Cale eyes, Manchester’s night out in New York. I’ve waited a long time to see Joan and her band and on this appearance (rescheduled from earlier in the year) she didn’t disappoint. 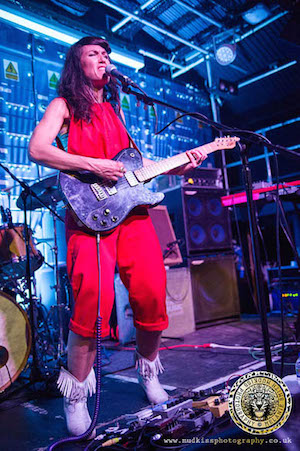 Joan’s talked in interviews about using her songwriting as healing and has always shown her raw and soulful side, but this recent work expresses joy alongside pain and longing. She’s also revealed that she lacked confidence in her ability to sing and perform in the past and referred to the freedom she’s found in becoming comfortable yet vulnerable in performance. This fearless and expressive energy connects with her audience. I have always loved her voice and she’s  been on my playlist since her collaborations with Anthony Hegarty. She’s worked with men renowned for their voices, Anthony and Rufus Wainwright and, of course, there was her relationship with Jeff Buckley, a voice that has become a legend. Joan is a classically trained violinist too, who’s made that transition to find her own voice and style. The set started with songs from The Classic, her latest album, including the soulful Holy City on which she’s taken influences from her past such as Al Green, Stevie Wonder and Marvin Gaye. When her guitar string broke after a particularly intense number, she asked if there was anyone in the audience who could help her out and replace it. No roadies or guitar technicians waiting in the wings, a man volunteered and was rewarded with a thank you kiss. I’m sure everyone wished they were him. Note to self, learn how to re-string a guitar. She revealed it was the first time she’d broken one on stage in 2014 and it was that energy, passion and connection with her audience that made this a very special Gorilla night. The mix of old and new material was building up into an unforgettable set, but time and trains wait for no woman. My last train had been cancelled and I had to catch an earlier one. I stood metaphorically with one foot on the platform, the other on the train at Oxford Road station, straining to hear the music rising from the arches below. She’s a great performer, with a fantastic band, catch her if you can.

Setlist: What Would You Do? /Holy City/ Good Together/ Get Direct/ The Ride /Stay/ New Years Day/ HWW /Christobel /Chemmie /I Defy /Magic/ Shame /CUYS/