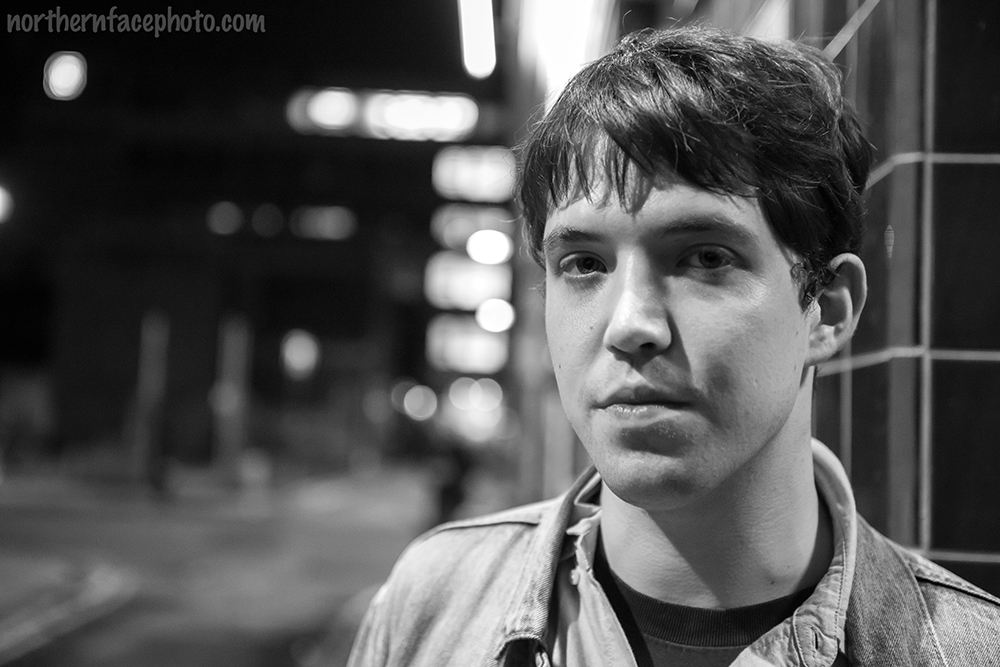 Jo Rose played a one off gig at Gullivers, Manchester – his first with a full band. Louder Than War’s Nigel Carr (words) and Dave Gleave (photos) were there to capture the event and report back below.

I first saw Jo Rose a year ago at The Castle playing songs from his album Spurs – a young singer songwriter from Manchester in double denim facing an unfamiliar crowd there to see The Lonesome Penniless Cowboys. His sound, which he describes as ‘Anti nu-folk’, is firmly rooted in US west coast Americana, beefed up tonight with a troop of quality local musicians.

Gullivers sits in the heart of Manchester’s Northern Quarter close to The Night and Day and the infamous Dry Bar. Tonight is a special night for Jo as it’s the first time he has played live with a full band – he’s been rehearsing furiously.

I’m sitting in the dressing room surrounded by instruments while Jo’s girlfriend Klara is relaxing behind me, tucking in to a kebab. It’s too dim to take any photos and support, Oh Man The Mountain are playing in the main hall.

LTW: This is your début with a full band – have you had to modify the arrangements of the songs?

‘Some of the arrangements are radically different, some are slightly tweaked – the general sound vibe is different, probably because we have had more time to work on it, also because everyone in the band is really fucking good! Chris Hillman (steel guitar), is a bit of a hero and we are all informed by similar influences, we love Americana music, Wilco, Crazy Horse, The Grateful Dead, Elliott Smith and Neil Young, we really dig all that stuff”

LTW: Any intention to change the name?

‘We are currently working through possible band names, like the ‘Bad Seeds’, maybe ‘Jo Rose and the something’ – in either case I see it not as a solo outing but a band.’

LTW: Is Nick Cave one of your influences?

‘I look up to him, I just like the lyrical content, the way he performs and the musicians he works with. Other members of the Bad Seeds too like Warren Ellis, that impetus to create things for the sake of creating them, Nick Cave doesn’t have a Taylor Swift style of marketing attitude, I really believe that he does it because he can’t fucking stop.’

LTW: How do you write your songs?

‘Recently I have tried writing the words first – I really like writing in the cinema to get ideas. I went to see the Marilyn Monroe film The Misfits, they all go Mustanging, I loved it and that image got stuck in my head. I’ve written lots of lyrics on trains and a lot of songs when I come home from work at the bar and I have too much energy to go to sleep, then I go through this weird process.’

LTW: Will the second album be with a full band?

‘I hope so, I don’t want to speak for them but I hope it’s with this band because they are really great. We’re going to work on a record and hopefully finance it ourselves – if anyone want to put it out then great and of they don’t – well as long as it’s something we are proud of…’ 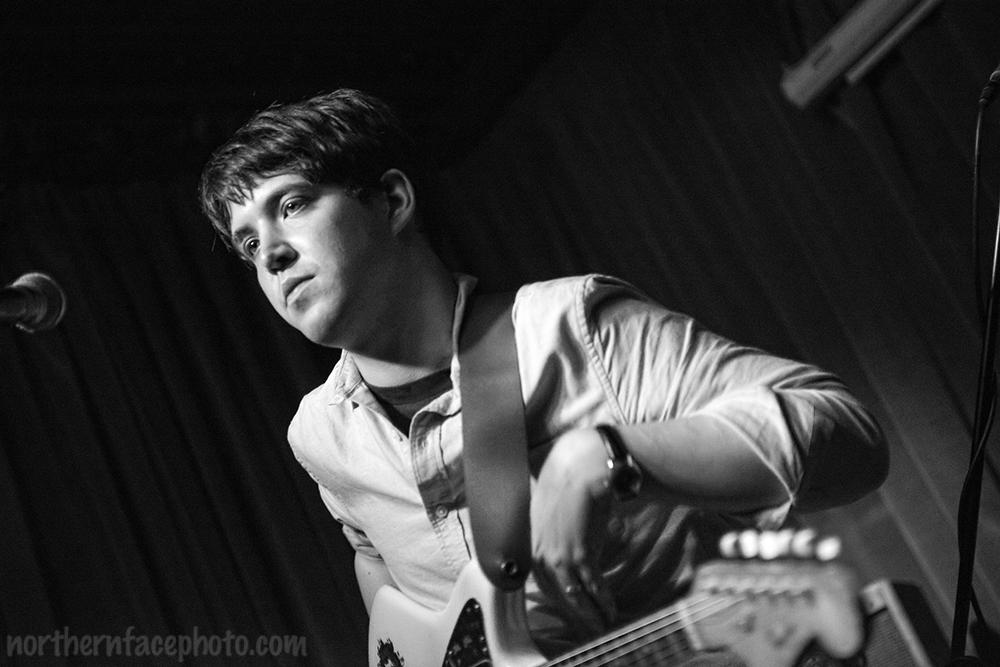 LTW: This is the first outing – A tour in the new year?

‘We are a generation of musicians that barring any Youtube sensations or getting on adverts we have to work full time and make music, and I’ve made my peace with that. I just really really love making music and I daydream about being in a Pavement or a Black Sabbath. I’d love to tour if it’s possible, financial, practical – we’re just going to get through this gig and see where it goes.’

LTW: What’s the best piece of advice you have ever been given?

‘It was from a book – “don’t become enamoured with power” from Michelle Foucault (French Philosopher), preface to Gilles Deleuze and Felix Guattari’s Anti-Oedipus.’

LTW: What are you interests outside of Music?

‘I read a lot and Samuel Beckett is my favourite writer but I like to try critical theory like Walter Benjamin’s Arcade Project of using collage techniques in literature. That really influences me, the idea of that vision of the word – little trinkets and bits of trash, traces of the past – that really fascinates me.’

LTW: What are your dreams and goals for the future?

‘I would like one day to do music for a living and just have what I need to live, not being so anxious about money that it made me sick to have to pay get my guitar fixed. I have no ambitions to be rich and famous I just want to get my music out to the world. In three years time I’d like us still to be playing together because they are fucking great and really inspire me a lot.’

‘I spent a lot of time trying to get attention from a label, quite directly and I got very down but then I just went back to writing. I bought The Brian Jonestown Massacre – ‘Thank god for mental illness’ – and its like a Q and A, like; ‘Did you try to sell your soul’ and Anton Newcome replied; ‘I tried but the queue was too long’ So I said fuck it! Now I’m just having a nice time’

LTW: Who is your Favourite artist?

Joanna Newsom – she’s a lyrical genius of my generation and it shows how women are received in music. Her lyrics are researched and poetically complex – the new Phoebe Buffay!

There is a palpable feeling of anticipation in the room tonight, Jo is clearly nervous about the gig. The band opens on familiar ground with Another Name For Mercy from Spurs and the crowd is immediately on their side. Jo has a beautifully delicate voice with a slight Neil Young whine – the backing band fleshes out the sound in a way that doesn’t just back the front man but completely changes the sound, augmenting and enhancing with punch and purpose

This isn’t a group of session musicians hanging back to fill in the gaps – Jo has allowed them to breathe new life into the original troubadour feel to create a whole new sound – a fully expanded arrangement, fresh and original with his thoughtful, paper thin vocals floating over the top. It’s perfectly layered and fully engaging with Hillman’s slide lulling us in the background like it had always been there.

During Balcony Doors Klara joins him on stage on backing vocals – it’s a beautiful song and her harmonies mesh perfectly with his creating a wonderfully rich and powerful sound. King of Your Blue Eyes opens with Jo singing alone to the crowd slowly bringing his guitar in to the mix – it’s songs like this that see this packed hall totally silent, transfixed and hanging on to every word before exploding into appreciation at the end . 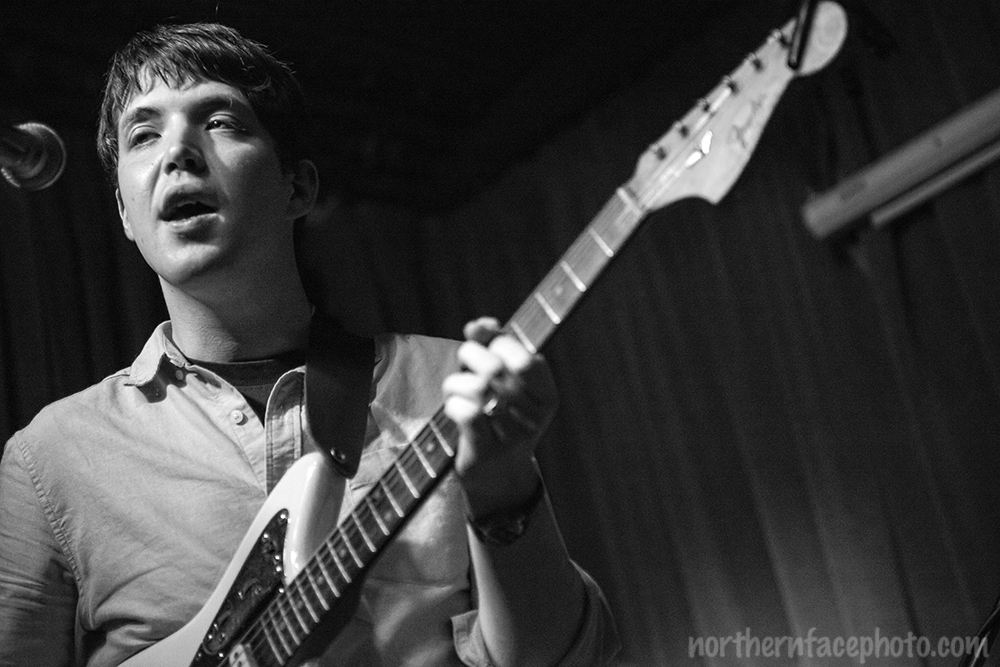 There are two new numbers mid set, Glass Arcade and Mustanging – the formation of which Jo discussed in the interview above – the latter, an upbeat, rocky affair breaking away from the slower vibe that has defined the set.

After closing  with Mary’s Dress he comes back alone for a couple of set pieces. Easier For Giving sees him take to the electric piano for another solo number. Beautifully sung, paced and thoughtful and once again the room is completely silent in a way that I have never witnessed before – usually at a gig like this there is some chatter going on but the silence gifts the performer the chance to truly express himself making it completely captivating. 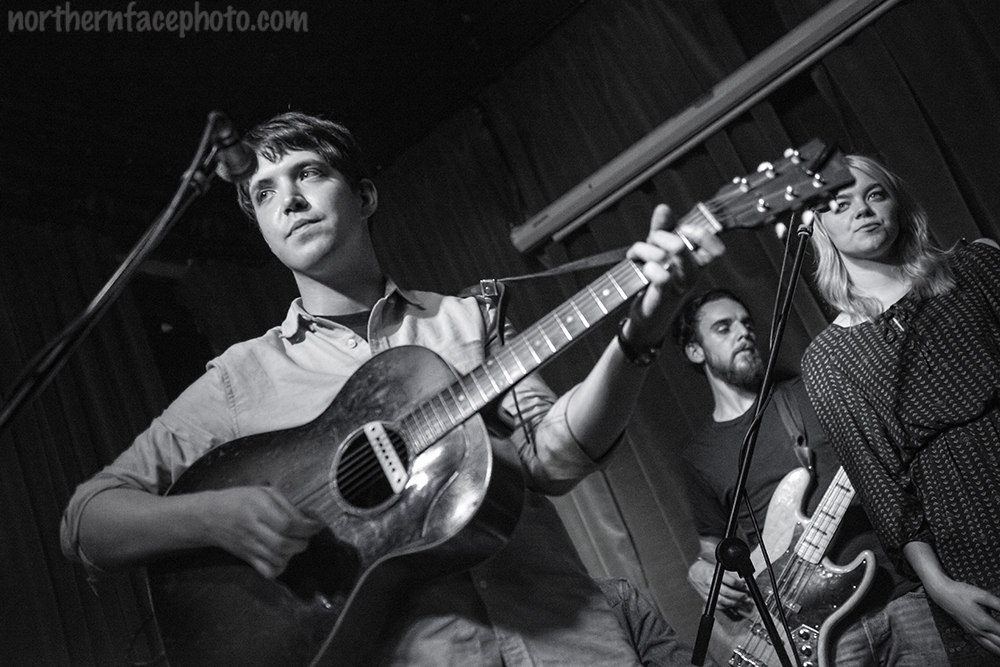 After thanking the band he opens up an area in front of the stage and brings Klara down. They face each other before gently moving in to Elliott Smith’s Thirteen. It’s a beautiful love song – Jo and Klara singing it jointly to his simple acoustic guitar accompaniment.

It’s the end to a remarkable show for this talented, intelligent and quiet man. During the interview I asked him about his relationship with Klara – one half of duo First Aid Kit, and he made it clear that they were private people who were engaged – nothing more. It is more than that though – there was mutual love and respect and without wishing to sound over sentimental you could feel that very strongly tonight.

A perfectly polished performance from one of Manchester rising stars. Unique in the style of music he is constructing right here in Manchester – music that you’d associate with deep Americana, truly authentic – a real treat.