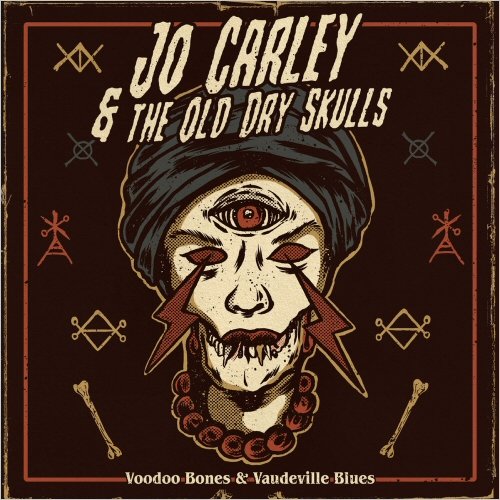 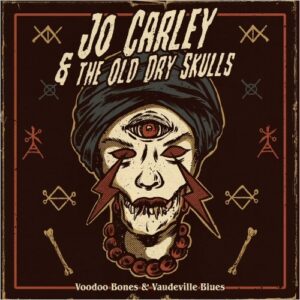 Jo Carley & The Old Dry Skulls return (from the dead?) with a new collection of tales from the dark-side, sound-tracked by an infectious blend of folky old school bluesy rockabilly. A combination of the usual suspects, guitar and double bass, mixed with the likes of kick drum and tambourine, banjo, washboard and fiddles create a set of mesmeric tunes providing pure escapism from the monotony of real life in 2021.

The band take you back to a time of voodoo and black magic with their addictive tales. Casting their spells over you and transporting you to a 1930s New Orleans. The lyrics are packed with tales of Satan, Witchdoctors and the undead in a display of dramatic theatrical vaudeville. And they are told over an impeccably played series of sinister tunes laced with an air of menace, dragging you in and stealing your soul.

Resistance is futile, you cannot fight the inevitable. From the opening bars of Little Limbs of Satan you’ll be under their spell. By the time The Zombie creeps into your psyche, you’ll be happy to be dancing amongst the undead. Not only is resistance futile, it is unnecessary. Let your soul be taken over by Beelzebub in the hypnotic rockabilly rhythms on The Devil.

She Got Him (with her Voodoo) and they got you with the driving rhythm. Things take a folky turn with Lose Your Soul, a song that could easily be a traditional old banjo led warning. Calypso melodies are interlaced into the bands sound on The Jungle, a fateful trip ending up in a union with a Witchdoctor, the tale continued into the following track, The Witchdoctor.

Dead But He Won’t Lie Down

Back to the undead with Dead But He Won’t Lie Down, seemingly laid back in style before kicking up the gears and adding some mandolin to the mix, with a frantic vocal from Jo. A spellbinding blues overdrive is revealed in the magnificent Under Your Spell. And, yes I am – well and truly. All the more so after the bewitchingly haunting instrumental of Crowhurst’s Lament.

Penultimate song Shipwreck Blues brings the banjo back and is a warning against getting involved in necromancy – as long as things aren’t too late by this stage, before the understated brilliance of the breathy The Bone Readers rounds things off nicely. Never get sick, never be poor – put a ring of salt around the door…

Don’t fight it, let your soul be taken by the voodoo and soothed by these irresistible bluesy rockabilly rhythms. Turn to the dark-side, even if its just for half an hour or so…

When gigs are a thing again, I’d love to see this lot share a stage with the likes of Jack Elfick’s Bikini Bottoms at a Graveyard Bash. Just sayin’ if anyone is listening.