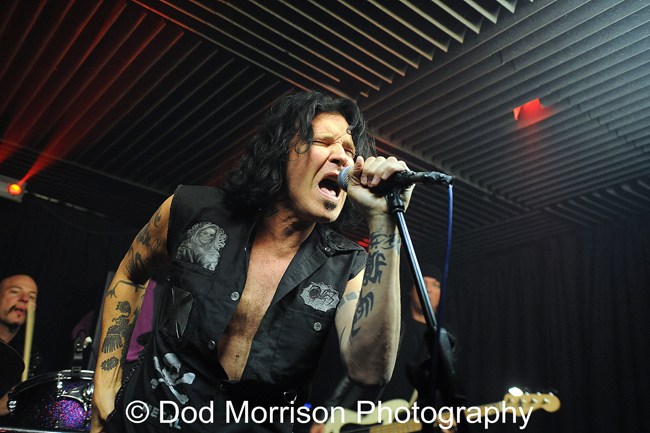 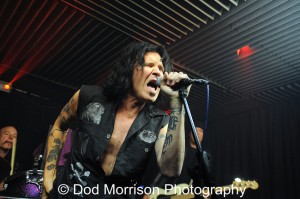 The LA band Love/Hate burst on to the music scene in 1990 with their debut album ‘Blackout In The Red Room’ with accolades from the like of Kerrang and Metal Hammer. On June 1st, 1992, lead singer Jizzy Pearl performed his legendary publicity stunt to try and help album sales. This involved Jizzy, with the help of a few others, successfully erecting a cross on the letter ‘Y’ of the Hollywood sign in LA and performing a mock crucifixion on it. He spent a few hours in jail and made headline news.

Jizzy Pearl brought his version of Love/Hate to Aberdeen, but due to an ex member of the band threatening to sue him the tour was renamed “Jizzy Pearl’s Love/Hate”. He also had to change the recent Love/Hate album “Crucified” to a solo album. This is to be the last tour under Love/Hate and Jizzy is now going to be the front man for Quiet Riot.

He came on stage saying:

“finally after twenty four years we get to play Aberdeen in the Moorings! We call Chicago the windy city but it is definitely your city!”

The first song of the evening was straight off the new mini album – a song called “Hanging You Out to Dry” about the infamous Hollywood stunt with a view point from the crucifee (sic) himself.

The evening was due to finish with “Wasted in America”, but they carried on with another couple of tracks and got the crowd going and singing along with their rendition of “Ace of Spades”

With Michael Ellis on Bass, Matt Star on drums and Chris Brady on Guitar, this was a good old rock n’ roll show – lots of guitar solos, hair flinging and just general good fun. There may be a love/hate relationship between the members of the original band, but between this band and the fans it was only love.