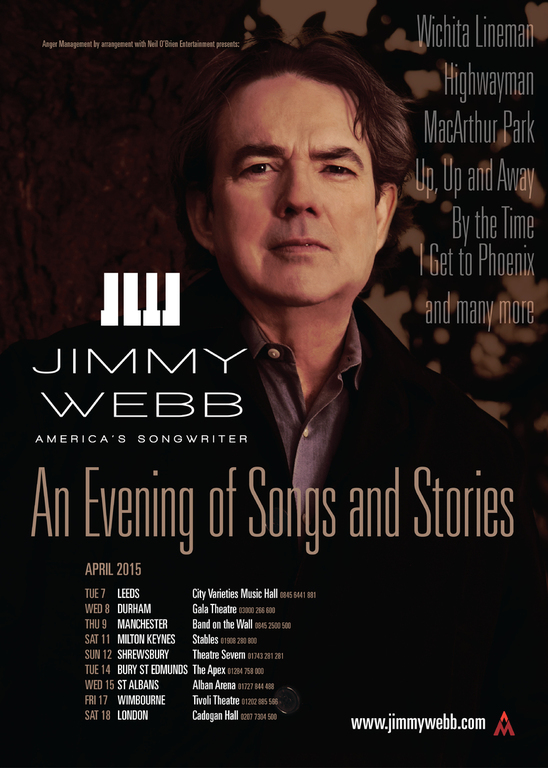 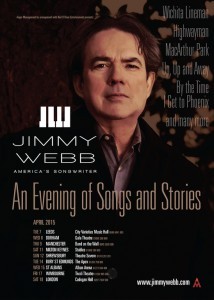 One of America’s legendary songwriters, Jimmy Webb, stops in London to share his songs and the stories behind them. Louder Than War’s Craig Chaligne reviews.

Jimmy Webb pays regular visits to the UK, a country he seems to hold in high regard and one of the several stories he told during the evening saw him waxing lyrical about his first landing at Heathrow when he was coming over to record an album with actor Richard Harris.

Tonight was the last show of a short UK tour billed as “An Evening of Song and Stories”.  After a sweet opening set from welsh singer-songwriter Deborah Rose (with the excellent BJ Cole guesting on pedal steel), Jimmy Webb took to the stage wearing a sparkling jacket whose effect was slightly lessened by the trainers he was wearing. It must be something to do with ageing American songwriters as Burt Bacharach wore the same attire at The Royal Festival Hall a couple of years ago. After thanking Deborah Rose for opening the show, he warned us that there would be much less singing throughout his performance and launched straight into “Highwaymen”, a tune that brought him back into the limelight during the 80s when it was recorded by the country supergroup of the same name composed of Johnny Cash, Kris Kristofferson, Waylon Jennings and Willie Nelson.

Webb followed this with a tale about his upbringing in rural Oklahoma and of his discovery of Glen Campbell via the song “Turn Around, Look At Me”. He then led us to California and his first steps in the music business at Motown and with some poetic license told us how he heard Glen Campbell’s version of “By The Time I Get To Phoenix” while driving on the San Antonio Freeway which gave him the opportunity to perform it for us. The way the tales were interwoven with the songs during the whole performance was very well done and something that must be a carefully scripted performance came out (thanks to Webb’s charm and easygoing manner) as totally spontaneous.

There were quite a few stories surrounding the creation of “Up, Up and Away”. Webb explained that he was puzzled that the song was so well known in the UK despite the fact that the 5th Dimension who had recorded the song weren’t a household name on this side of the Atlantic. After some research it appears the song had been used for a brand of bread called Nimble at the beginning of the 70s.

He paid his dues to his piano teacher by performing two versions of “Amazing Grace”, the standard one he used to play at church and the other with all the embellishments thanks to her lessons.  Tales followed about two of Webb’s most illustrious collaborators with recollections about Art Garfunkel’s choosiness when it came to the material he was going to sing (he requested Webb to give him “something more yellow” after rejecting a dozen songs) and of a legendary trip to Ireland with Richard Harris. Webb closed the evening with the obligatory MacArthur Park that remains his most extraordinary song.