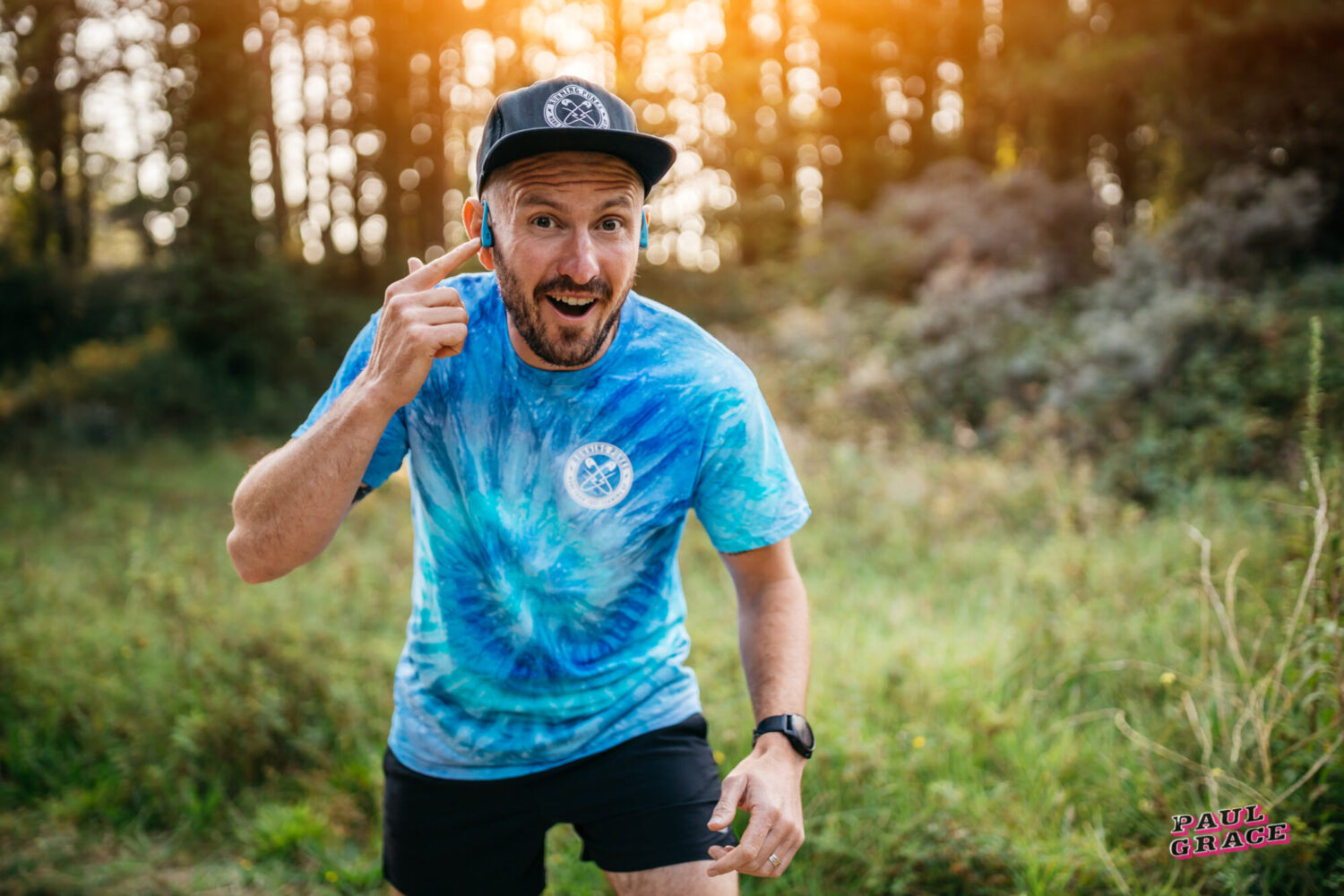 Jimmy Watkins is the running reviewing punk phenomenon who’s taking over the world! He recently ran with IDLES and Lauren Laverne’s a huge fan. Paul Grace caught up for a chat with the runner-turned-rockstar-turned-runner/reviewer.

Jimmy Watkins has been making huge waves across social media of late with his utterly brilliant running reviews. He’s also co-founder of the Running Punks community; a group that brings together like-minded runners of all levels with the goal of making running fun and accessible to all.

I met up with Jimmy at a beautiful beach near his home town of Llanelli, South Wales. Kitted out in his Running Punks running gear, Jimmy comes across as a sorted, well-balanced guy, with a genuine lust for life. But this wasn’t always the case.

In the mid-’00s Jimmy was a professional runner. He reached the top of his game very quickly, peaking out at the 2006 World Championships:

‘Within three years I was in the World Championships in Moscow. I broke the Welsh record twice while I was out there. It was mad!’.

His love affair with running was relatively short-lived though, and within a couple of years he’d ditched the ‘daps’ (Welsh expression for trainers) in favour of a guitar and mic:

‘I failed to get picked for the Commonwealth Games the following year which pissed me off, so I fell out of love with running. I’d been in bands in school and was also writing songs while I was a runner. A guy I trained with was a drummer so we just started jamming and then another guy called Mark Foley joined on bass. Mark had a rehearsal studio in Cardiff so we’d play for hours after the bands had finished rehearsing, and then go to the pub and get pissed. That was the life I always wanted back then – it was such a laugh. Our band was called Strange News From Another Star and I was singer/guitarist’.

Jimmy’s love of music and playing in bands grew and he was soon presented with an opportunity to join Welsh post-hardcore outfit Future Of The Left:

‘Their bass player Kelson left and I initially stepped in to help them out as a side project but it became Future Of The Left’.

His time with the band presented its own demons however which ultimately lead to a downwards spiral of regret, guilt and heavy alcohol use:

‘I’d gone from running at a high level but I stopped because I wanted to do my own thing. I had that with Strange News but in Future Of The Left I was just “a guitarist”, and I didn’t quit at the top of my game in athletics to become just “a guitarist”. That manifested a lot of dark shit in my head. I was nearly 30, and thought “What the fuck have I done?”. I struggled with drinking and I ended up getting sacked from the band. My nickname became “Jimmy Train-Wreck” for a while’.

Jimmy then moved out of Cardiff but regret lingered, ‘I was actually in a good place when I moved away. I was healthy but all of a sudden it went to shit again. I hit 35, was married, settled and had a proper job for the first time ever. But I never forgot the fact that I’d had a real hunger for athletics and also music and it felt like I’d really fucked up both. It was an existential dread. The one thing I was born to do was running and I fucked it up. I ended up putting on six stone through drinking’. 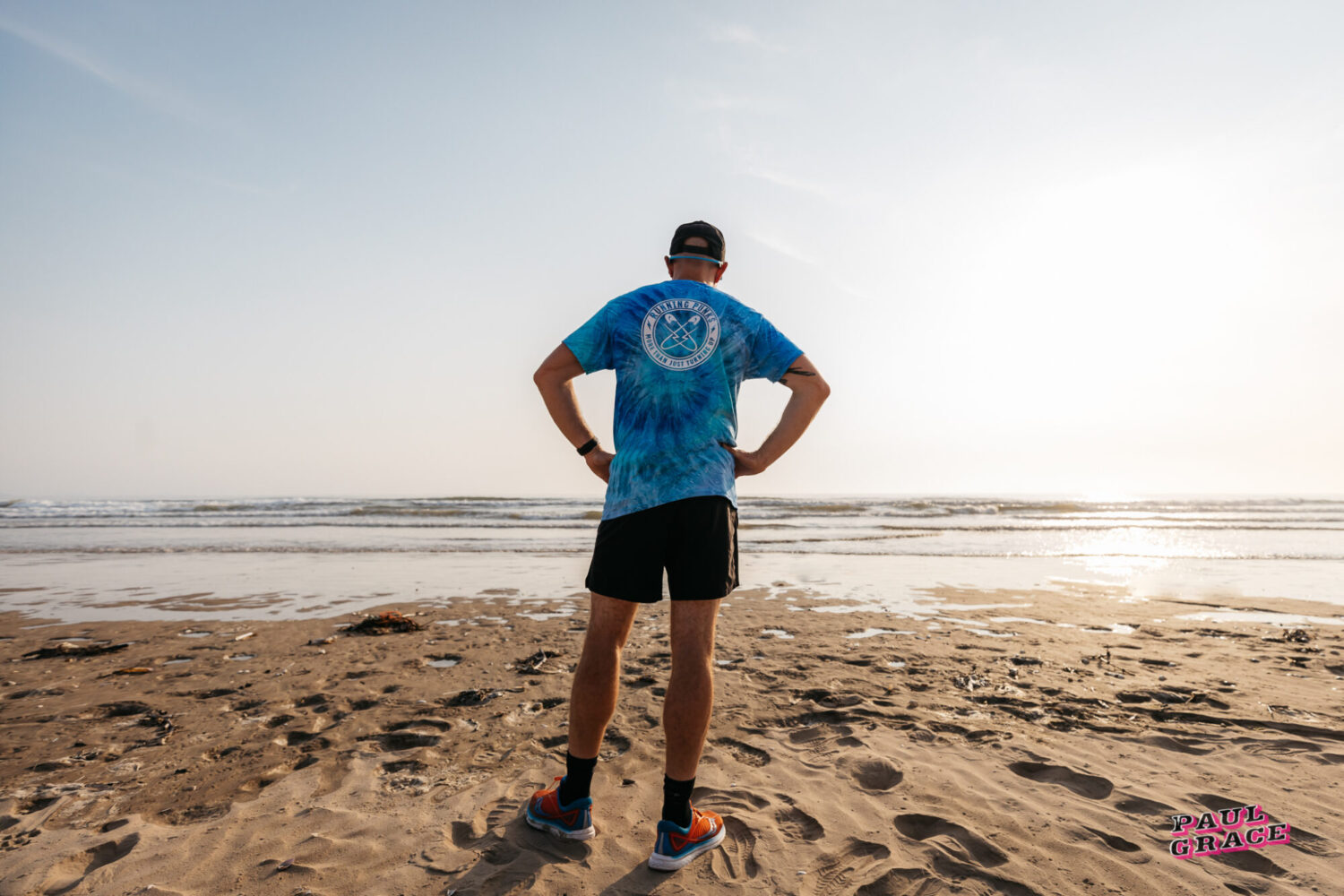 In late 2018 Jimmy’s wife bought him a photo of him running in the 2006 World Championships race which inspired him to start running again, ‘I realised that I had to be that 24-year-old Jimmy again and all it needed was a tiny mind shift. I started running on New Year’s Day, 2019. I started slowly, the weight started coming off and then I stopped drinking. I now haven’t drunk alcohol for over a year’.

During a coastal run later that year, he crossed paths with an old pal/bandmate Rhodri Morgan, and together they formed the Running Punks community:

‘It was initially set up to encourage touring bands to meet up on the Cardiff leg of their tours and take them out for a run. We also became aware of loads of people who wanted to run but didn’t know where to start; non-musicians, office workers and beginners. So I started looking at what was stopping people from running. It seemed there was so much bullshit about running – messages telling you that you’ve got to buy the right shoes and kit so we went all punk about it. We run in cotton t-shirts, old trainers – we just exist to get people out there running. It’s nearly a year old now and it’s amazing’.

The Running Punks community now has members across the world:

‘I’m now sending training plans to people around the world! Today I did a plan for someone in Brazil. When we get orders for t-shirts from more than five people in an area we technically have enough for them to set up their own Running Punks club. We contact them to tell them about the other people in their area and encourage them to meet up. We’ve got California, Sydney, New York, Montreal covered. Next year there are gonna be loads of running clubs around the world’. 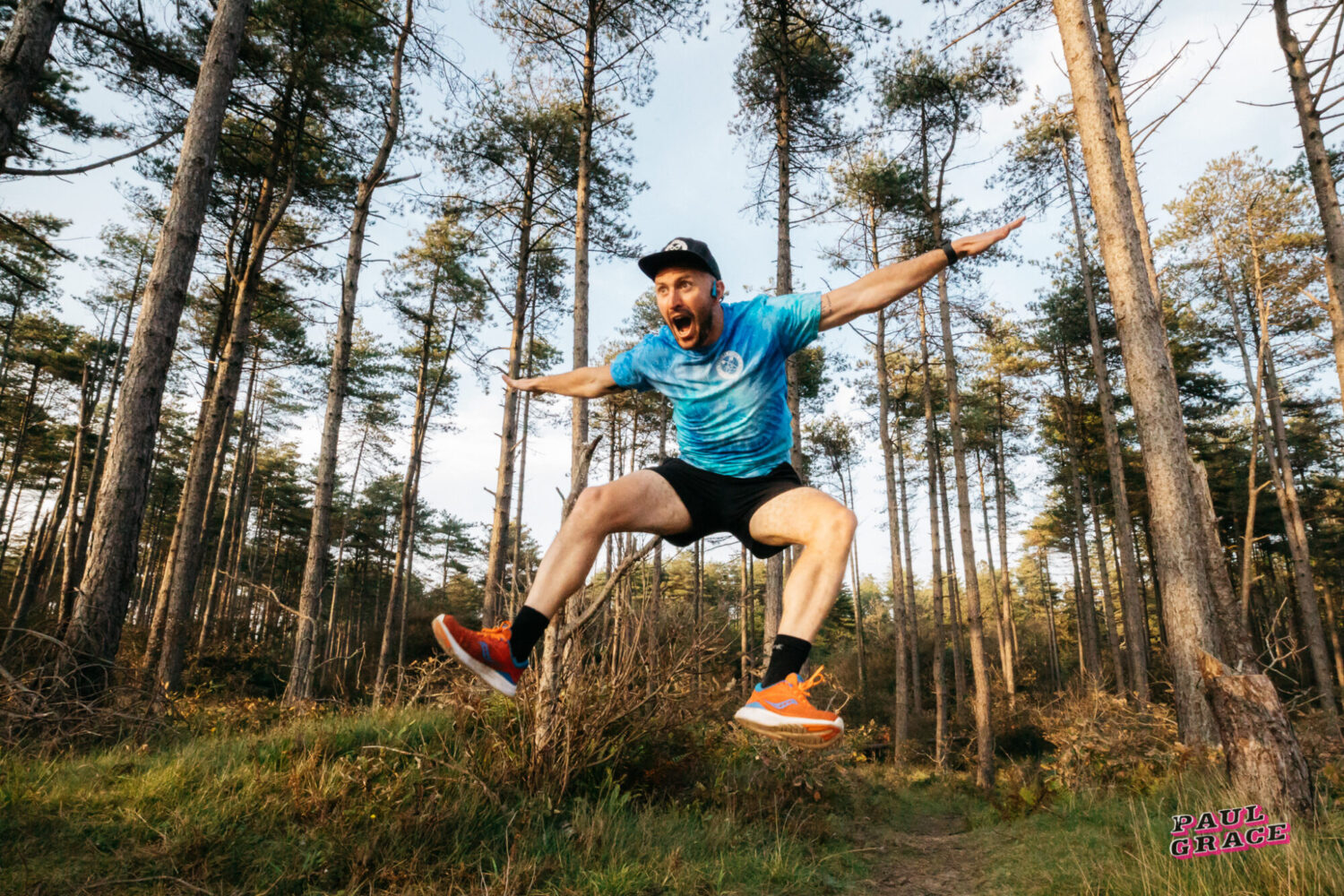 Aside from Running Punks, Jimmy has been creating a huge social media buzz for his unique running reviews:

‘It was weird. As a creative person, it’s rare that an idea pops into your head that no-one else has had. I was walking back from the Co-op one-day and I just thought of reviewing an album while running. I looked online and saw that no one was doing it and thought “Fuck I’ve invented something!”. To help me decide my first running review record I put it to an online vote and The Spice Girls won. So I filmed myself running and losing myself in the music. I put it online and it all went crazy’.

Laura Laverne is a huge fan and Jimmy recently ran with Jon Bevis and Dev from IDLES while reviewing their new album, Ultra Mono.

His reviews are honest, enthusiastic and full of piss-yourself-laughing anecdotes:

‘I loved doing the Butthole Surfers review! I saw a talking fish before I set off that morning which couldn’t have been more fitting for that record. There was a guy who caught a massive carp at the reservoir that looked at me and it looked like it was saying “Hello!”. I just couldn’t run after that!’

One of his favourite reviews has been Ghostpoet; ‘I’ve become friends with him after Lauren Laverne tagged me. He said he was honoured that I ran to his album’.

‘I really hated Slipknot! I thought I was gonna like them but I hated it. They sounded like the angriest cricket team in the world. I could hear there was loads of them but it was all one-note. So much nihilism – there was no hope in those songs. I also hated the Ramones, they’re so boring. It just baffled me. The band that came second in that vote was Bad Brains. Now I was buzzing to them. I was running around Llanelli screaming – I loved them!’.

‘Lockdown has been great for Running Punks with more people getting into health. It turned Running Punks from a hobby to my job. I do a six-week running plan for £25. I give you a call and we talk about what you want to get from running. We work out what we can do to make it as fun as possible and I then do you a plan. Some people charge £150 for training plans but I’d rather do them cheaply and get loads of people running. I’ve got people on their fourth or fifth plan and around 150 people signed up at the moment’. 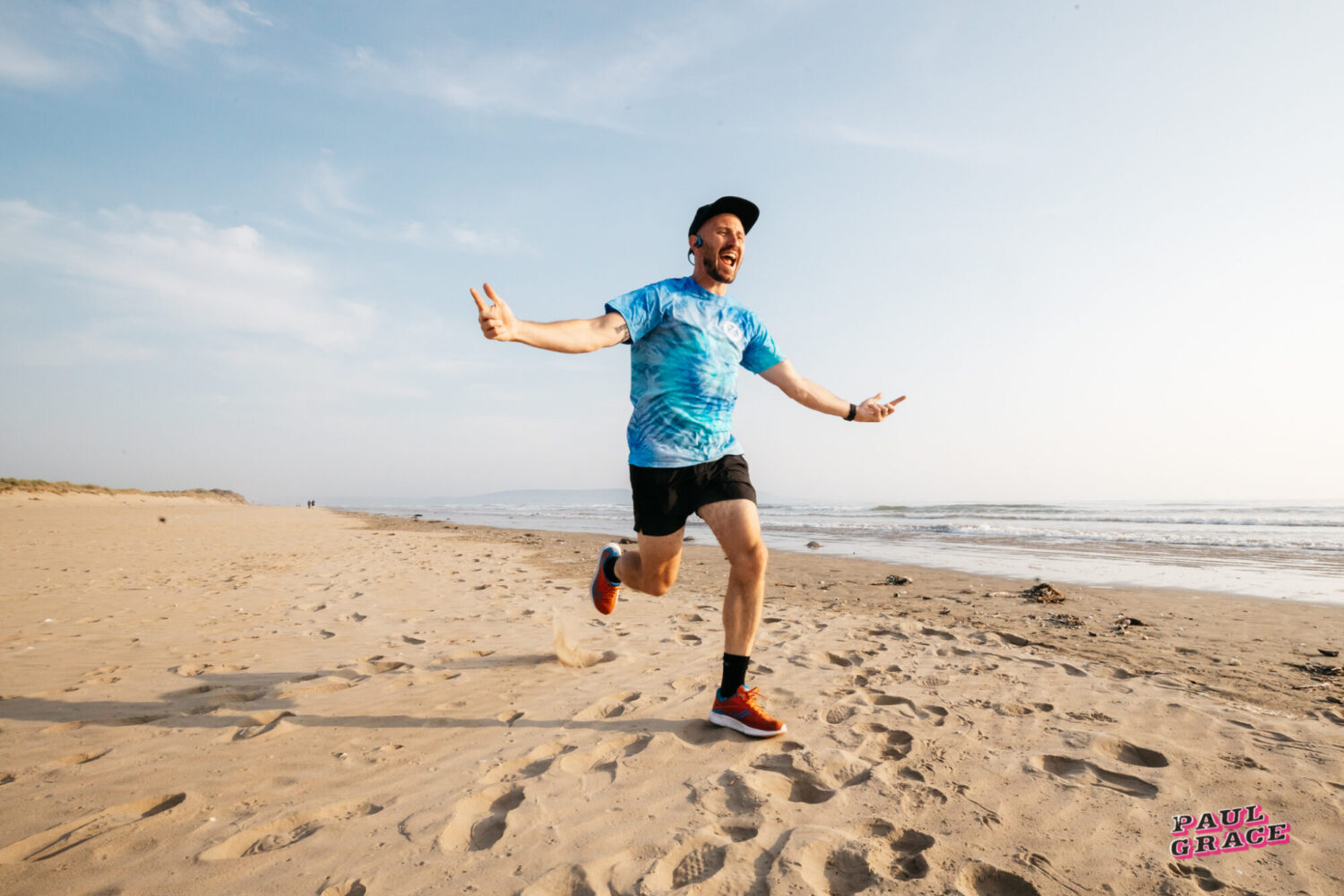 Jimmy raves about the social, mental and physical benefits of running:

‘We noticed that there’s something about running that makes you open up to strangers – people share a lot of dark stuff. I phone people to talk about running plans and you get exposed to some amazing things. A lot of people turn to running because of mental health issues, or because something bad has happened in their lives and running is a way for them to cope. It’s definitely helped me deal with stuff from the past. Everything I thought that was bad about me, I found so many people have shared the same journey and feelings. So many guys tell me what they’d done when they were drunk in the past. I used to beat myself up and it’s definitely helped me deal with the demons’.

Jimmy is keen to offer advice to anyone keen to start running:

‘Don’t make it goal-based – just go out for a time, like ten minutes. Go real slow if you need to – it’s still running. Keep it easy. In the Running Punks club, we run so slow. If it’s a bit faster than a walk it’s still running. Fuck personal bests. There’s a reason we’ve been doing it as humans for so long – you’ve got to allow it to come to you’.