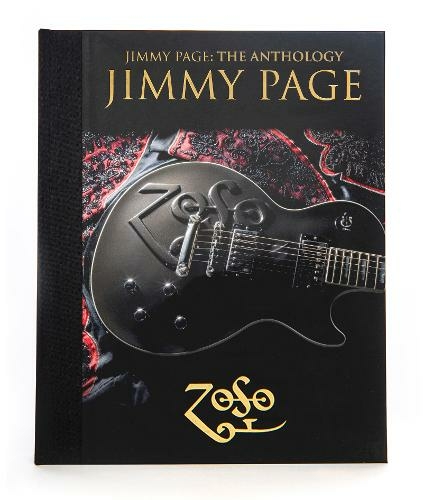 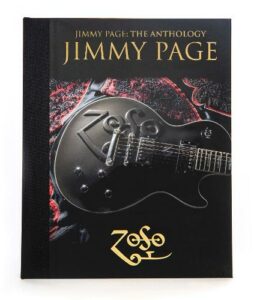 From iconic guitars to rare photographs, correspondence to costumes. Everything is here, lovingly shot and meticulously described. Possibly the most comprehensive rock anthology ever encountered. Gordon Rutherford turns it up to eleven for Louder Than War.

Apparently, there’s a lady who’s sure all that glitters is gold. Who knows, she may well be right. It certainly makes me wonder what she would make of this quite magnificent book that I sit holding in my hands right now.

Weighing in at a hefty 2.66kg (yes, I actually weighed it) this is, quite literally, a weighty tome. Therefore, a big advantage of this book is that, in these miserable lockdown days when gyms are closed, you can use it to tone your upper arms when you are not engrossed in it.

Enough flippancy, this is a serious hardback that requires serious appraisal. Jimmy Page: The Anthology is the ultimate coffee table book. It is a work that one simply cannot resist picking up and randomly dipping into. But beware, it is so engrossing that it is impossible to casually browse. A spare couple of minutes whilst you are waiting for your partner to get ready will inevitably turn into nothing less than half an hour.

The subject requires little by way of introduction. In a time of monolithic rock gods, Led Zeppelin were the nonpareil. Behold the magnificent vista and consider their output. Nobody had better riffs. Nobody else had that ability to blend light and shade. And nobody else had such an extensive catalogue of consistent quality and subtle diversity between each and every album.

The creative godhead and driving force behind the band was the creator of this fantastic anthology, James Patrick Page. Just as Zeppelin were unparalleled in the band stakes, as a musician Jimmy Page had no peers. He was the supreme axe hero in an ocean of rock guitarists. With unrivalled range and vision, Page was the king of the riffs and an absolute master of innovation and improvisation. Want proof? Take Whole Lotta Love, with that abstract and radical (and radio inimical) middle section featuring Page on his Vox ‘Long Tom’ tape echo. Or Kashmir. Or Ten Years Gone, Immigrant Song or In My Time of Dying. And let’s not forget that guitar shop soundtrack, Stairway To Heaven. You get the picture. If anyone has an anthology worth investing in, it’s Jimmy Page.

I’ve set this piece up by erecting a gigantic Led Zeppelin banner, but it’s important to call out the fact that this is not just a document covering Zeppelin-era Page. Oh no, it’s so much more comprehensive than that. Jimmy Page: The Anthology spans six decades and covers his entire career, from his days as a kid session musician to present day. Naturally, the Zeppelin years represent a chunk of the anthology, but refreshingly there’s so much more to keep you entertained. And in this book, the curios are the stars, not the tunes.

I must confess that I am a bit of a memorabilia geek and this book satisfies that need in spades. The guitar-related material alone is worth a book in its own right. The instruments are presented here in the form of the most stunning, lovingly shot photographs. You could gaze adoringly upon these darlings forever. These are accompanied by the most comprehensive backstories told by Page, concerning how he discovered and acquired each and every instrument and, critically, why he felt that particular instrument would enhance his sound. He wasn’t just a collector – he had a vision for every song and his choice of instrument played a major part in helping him to realise that.

Naturally, the star performers are all here. There’s his trademark sunburst Gibson Les Paul Standard ‘Number One’, which he purchased from Joe Walsh. And, of course, no Jimmy Page anthology would be complete without that iconic Gibson double neck, which he belatedly realised he had to acquire in order to play Stairway To Heaven live. But it’s some of the less obvious axes, ranging from the sublime to the quite ridiculous, that I enjoyed looking at and reading about. Like his £35 Danelectro, on which he wrote Kashmir and In My Time Of Dying. Or the wonderful quirkiness of his Vox Phantom from his Yardbirds days. Then there’s that work of art, the Gretsch White Falcon (I’m always a sucker for a Gretsch), used in his Page & Plant period, and the downright ugly Jerry Jones long horn double neck which he played at Puff Daddy’s Net Aid event in 1998.

However, it’s not only guitars going on in this anthology. Obviously, we have amps, cabs and pedals, but more interestingly, there are dulcimers and drums; synthesisers and sonic waves; mellotrons and mouth organs. Then we get into the real rarities, like the preposterously amateur hand drawn fliers for early Zeppelin shows, the bootleg records, ticket stubs, recording notes and photographs. There are invoices for equipment dating back to 1963 and a letter from the BBC from 1958 inviting him and his skiffle group to audition and requesting that his father sign the associated contract as Page was too young. This being Jimmy Page’s anthology, people will come for the guitars, but they will stay for all the tchotchke because it’s so much of that seemingly trivial ephemera that makes The Anthology so absorbing.

Most intriguingly, and surreally, we have clothing. Lots and lots of clothing. I mean, who keeps clothes they wore from the 1960s and 1970s? A very shrewd Jimmy Page did, it transpires. And it is utterly fascinating. For example, alongside each photograph of the garment as it is today, is an accompanying photo of him wearing it back in the day. It is quite incredible.

Two things strike me when I reflect on this book. Firstly, despite all the alleged excesses he enjoyed, Page has the most incredible power of recall. Every artefact here has a story and his ability to remember even the most mundane detail of his career is as remarkable as his guitar playing. Secondly, who knew that Jimmy Page was such an arch hoarder? I’m sure his compulsion to keep hold of absolutely everything must have driven the people around him up the wall through the years. I can’t find my most recent broadband statement, yet Page has letters from 1958. Perhaps, being such a visionary, he always had this anthology in mind.

In my mind’s eye, I can imagine all of these wonderful artefacts; the big and the small, the expensive and the seemingly throwaway, all on show at a grand exhibition. Fancy walking from room to room and gazing in wonder at this collection of the most wonderful objet d’art. All of these curiosities collected in one place. You could spend hours and hours just gazing upon rock and roll history (not to mention the significant contribution to popular culture and fashion). Tickets would sell for a small fortune and it would be queued around the block. Please make it happen, Mr. Page.

I cannot close this piece without mentioning the publisher of The Anthology, Genesis. They have lovingly produced a quite beautiful collector’s item in this book. The quality of paper, the cover material, the binding – it is all quite perfect and that attention to detail makes this anthology worth every single penny. Their presentation does justice to the content and there can be no higher accolade than that.

As the hype increases towards 25th December, I cannot imagine a better Christmas gift for the music lover in your life. That assumes, of course, that Santa Claus can get it down the chimney.