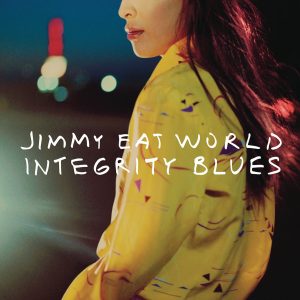 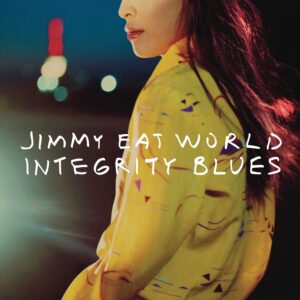 For most bands, taking a year off is almost a pre-requisite. Not so for Jimmy Eat World; when the Mesa four-piece selected a sabbatical, after the straight-to-tape toughness of 2013’s Damage, it was an open-ended and intricate decision, allowing the band to ponder their next move. It was a decision that gave them the creative inspiration and freedom they desired – recruiting Paramore and Nine Inch Nails producer Justin Meldal-Johnsen, Jim Adkins and co released an articulate, if slightly stilted, mission statement surrounding the record and its concept. “It is about throwing away your default responses to life, accept life on the terms of life and become willing to accept the best any of us have is to be in a state of progress,” Adkins said.

Fittingly, Integrity Blues is a complete contrast to Damage‘s muscular minimalism – opener ‘You With Me’ is a haunting invitation of striking acoustic chords and mechanical, rigid drum patterns, before a shimmering explosion into a typically emotionally-charged chorus. As he did with Paramore’s self-titled record, Meldal-Johnsen sprinkles his dynamic DNA all over the album’s tracks, whether it be layering pounding, programmed snares and grand keyboards on the ominous ‘Pretty Grids’, embellishing ‘It Matters” heartfelt sentiments with wandering, twinkling piano, and bathing the title track with swelling strings. Like Paramore, though, the producer crucially keeps the record fun and exciting. Stylistically, it’s more akin to the band’s underrated, but heavily polished, 2007 album Chase This Light.

It’s refreshing to hear JEW take a break from their usual brand of emotionally-charged, pummeling punk-rock, especially when it delivers results as chillingly impressive as ‘Pass the Baby’. A song as disturbing, and alluring, as its title, it’s built around distant, volatile percussion – similar to CTL‘s equally eerie ‘Gotta Be Somebody’s Blues’ – and Adkins’ detached narrative, before it dissolves into a desert storm of drop D distortion, florid basswork and bone-shattering drums. When they do stick to their tried-and-tested formula, for example on the ‘Work’-style blast of ‘Through’, it ironically feels like an anomoly. But when they mix it with Meldal-Johnsen’s production, on the forlorn harmonies of ‘Sure and Certain’ and the stabbing ‘Get Right’, it’s much more compelling.

Strip away the bells and whistles and you have a traditional Jimmy Eat World record, in its essence – heartfelt aesthetics, Adkins’ trembling tenor and the ability to rock out with Sabbath-style lustre – but in seeking new adventures and agendas, Jimmy Eat World have given themselves a new identity and a new adventure. Maybe they should take a break more often.