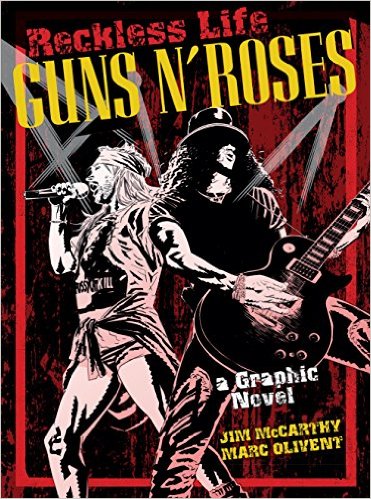 Jamie Havlin reviews a graphic novel that traces the history of a band synonymous with rock and roll excess and controversy, Guns N’ Roses.

In his introduction to the book, Joel McIver writes: ‘You probably know Appetite [For Destruction] pretty well if you’re reading this.’

Well, no. Not me. The phenomenon of Guns N’ Roses largely passed me by. Of course I know tracks like Sweet Child O’ Mine and Paradise City but believe me, my breath was never baited while waiting for Chinese Democracy (luckily enough).

Jim McCarthy has previously penned a number of biographical graphic novels, including Sex Pistols: The Graphic Novel and here he tells the tale of Guns N’ Roses, from the early days of Axl Rose and his cohorts getting together through to their spectacular rise to fame and almost equally spectacular fall from grace.

It’s the story of the young Rose, that I found most fascinating: his troubled schooldays in Lafayette, Indiana; being regularly hassled by local cops; his stepdad throwing out televisions because they were ‘satanic’ and anger roiling through his body at the self righteousness of the adults from his small town Pentecostal community – and the hypocrisy described here is no great advert for that particular church.

Jim McCarthy’s incisive script keeps the action rolling along at a pretty much frantic pace. This is a band that has certainly experienced highs and lows in just about every way and when I say highs, I don’t just mean the crazy amounts of industrial strength drugs that the band and those close to them managed to ingest over the years.

Life was never dull in the glory days of the Guns N’ Roses universe and McCarthy has no shortage of material to draw upon. In addition to the partying, there’s dating porn stars and riots at concerts; controversies over some negative comments about gays and immigrants and their cover of a Charles Manson song; there’s also near death experiences and real deaths and I lost count of the mind boggling number of lawsuits and acrimonious departures of band members. The book also includes cameos from Henry Rollins, Mick Jagger and Kurt Cobain. Oh and a leg biting incident and some past life regression are thrown in for good measure too.

Eventually with megalomaniac Rose as the sole original member, there are increasingly more late shows and when they do actually manage to hit the stage the odds are always on something going wrong, even if it’s only Axl coercing security staff to throw out an audience member for the crime of wearing a Slash T-shirt. Before too long Axl and his hired hands are cancelling more shows than they actually play.

The artwork here is very impressive, black and white conveying well the contrasts outlined in the book, small town Lafayette with LA; Jocks with outsiders; gigging in dumps ‘that would have given any self-respecting rodent the shits’ with performing to tens of thousands in enormodomes across the globe and artist Marc Olivent’s talent shines throughout the book’s 160 pages. A relative newcomer in the world of graphic art, he is definitely a name to watch out for.

Reckless Life is an often absorbing read even though I doubt I’ll be tempted to give the band’s music another chance. If you do know (and love) Appetite For Destruction, or any of the other Guns N’ Roses albums then I would guess you might take even more from the book.