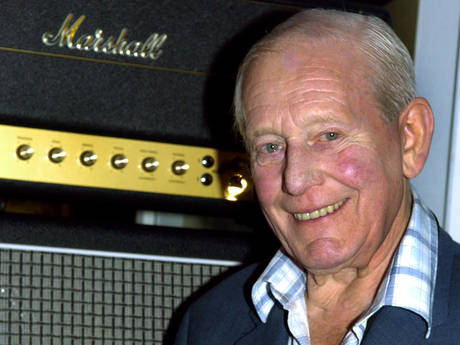 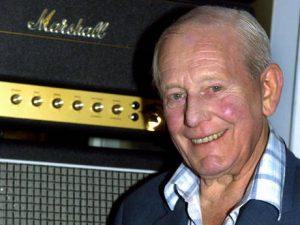 Since Marshall was founded some 50 years ago, the company has become one of the most recognisable and iconic names in rock, with the company’s unmistakable livery gracing stages across the globe, they even ventured into football sponsorship when they became the main sponsor of the MK Dons at the teams inception in 2004.

Marshall made the best amps as every back line at every festival in the world is evidence of.

For several years Goldblade have had a sponsorship deal with Marshall and their customer care has been great. We have done the tour of the factory in Milton Keynes, marvelled at the valves and looked at all the component parts – it’s one of the holy grails of rock n roll! Jim Marshall – a former wardrobe manufacturer who went on to make the greatest guitar amp in the world.

Dr. Jim Marshall OBE began as a drum kit retailer but then began hand building amplifiers in the early 1960s, setting out to create a new valve guitar amplifier, using the Fender Bassman circuit as a model. With the sixth prototype, he hit upon ‘the Marshall sound’. The rest as they say is history.

By the late ’60s, rock artists such as Jimi Hendrix could be seen playing against a backdrop of Marshall stacks. The mid-’70s saw the launch of the first master volume Marshalls and in 1982, the company introduced its iconic JCM800 model.

Marshall was awarded The Queen’s Award For Export in 1984, while 2012 sees the company celebrating 50 years in the business.

In an obituary posted on the company’s website, Marshall Amps note: “in addition to the creation of the amps chosen by countless guitar heroes and game changing bands, Jim was also an incredibly humble and generous man who, over the past several decades, has quietly donated many millions of pounds to worthy causes.”