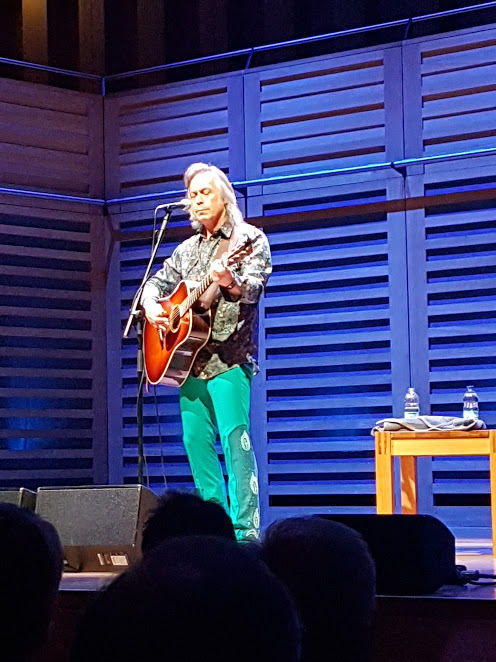 One of Americana’s greatest talents returns to the UK to promote his latest LP “London Southern”. Louder Than War’s Craig Chaligne reviews.

Originally scheduled to be a joint headline show with another US songwriting legend (Rodney Crowell), this event became a full Lauderdale headline performance with a support slot by Red Sky July following the Texan’s health issues. This disappointment turned delight as Red Sky July in a duo configuration instead of their normal trio format offered a great performance. Cherry picking songs from their four albums, Shelly and Charity won the crowd over with their harmonies and self depreciating humour. 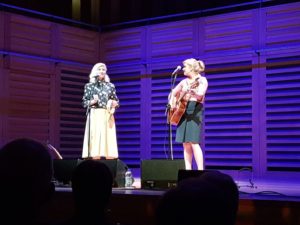 Jim Lauderdale is currently touring the Americana festivals in the UK and seeing him in the intimate setting of the hall one at Kings Place was a real treat. Armed only with an acoustic guitar and his booming voice, the Nashville based singer songwriter played a show centered round the tracks from his latest record London Southern that he recorded in London 5 years ago. Lauderdale is an extremely prolific songwriter and regularly releases three albums per year. Feeling that this album had something special, he held on to it until he found a label willing to put extra effort in promoting it.

Most of the tracks were introduced with reminiscences about its recording that took place in Balham under the supervision of Neil Brockbank and Bobby Irwin, both long time drummer and producer/sound engineer for Nick Lowe. Both have sadly passed away since the album was made but Lauderdale took the time to emphasise the importance that both men (and the rest of Nick Lowe’s wonderful backing band) had on the finished product and how the songs turned out. In a rather interesting way Jim started the gig with “This Is A Door”, the last track of the new album after which he proceeded to take a stroll through his back catalogue and tell great stories on all the people that had collaborated with him on the songs. Second on the bill that night was  “Seems Like You’re Gonna Take Me Back”, a tune that was originally covered a decade ago by the great Solomon Burke on an album he was cutting with Jim’s old friend Buddy Miller. One of Jim’s most iconic songs “The King of Broken Hearts” was inspired by a scene depicted in a biography on Gram Parsons penned by Sid Griffin while “I’ve Lost You”, a co-write with Elvis Costello was penned while on tour with the Sugarcanes and eventually surfaced on “National Ransom”.

The production on “London Southern” is excellent, the players displaying the same tasteful restraint they usually have on Nick Lowe’s records but it is testament to the quality of the songs that they worked as well in a solo setting. The playful “You Came To Get Me” worked wonders as did the country shuffle of “Don’t Shut Me Down” (co-written with the legendary Dan Penn). The mornful (and soulful) “We’ve Only Got So Much Time Here” was dedicated to the memory of Irwin and Brockbank while “I Love You More” was the highlight of the evening, Lauderdale placing his vocals masterfully over a few spare chords. “Headed For The Hills” co-written with Grateful Dead lyricist Robert Hunter saw Jim invite the audience to join them on the choruses and the boogie of “Halfway Down” proved the perfect closing song.