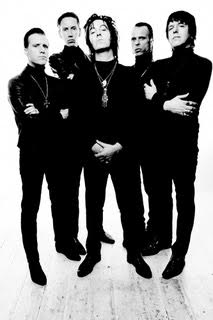 The rabble-rousing band are inviting fans to get together and get involved by joining The CollectiV – an organisation that will see the group and their admirers become their own record label.

Jim Jones & The Righteous Mind have elected to reject what they see as the outmoded business model of the old music industry.  In its place will be greater sense of unity between the band and their followers.

“I don’t like those barriers they have at concerts that puts the distance between the stage and the crowd,” says frontman Jim Jones. “It makes it like it’s a separate thing and it’s not; the whole point is to channel each other’s energies and make that direct contact.”

He continues: “If you can lift someone out of their mundane day and make them feel as if there’s something better, or we can go a little bit higher and that, hey, you’re not on your own… we can make that connection.

“That’s what it’s all about – that connection!

“And then you realise that the same is true of your recorded work. Why have that barrier and mechanism of middlemen and the record industry people telling you what you can and can’t do, when it makes perfect sense for our fans to be our record label? Together we can do this!”

Using Kickstarter, members of The CollectiV will receive delivery of the new album ahead of its release date. Exclusive membership items will also be available.

From Thee Hypnotics and Black Moses through to the Jim Jones Revue and The Righteous Mind, Jim Jones has dedicated his life to making exciting, passionate rock ‘n’ roll music. Playing from the heart and shooting from the hip, Jim remains an elemental, innovative force in rock ‘n’ roll.