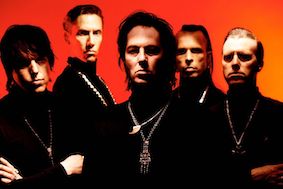 Following on from their critically acclaimed debut album, Super Natural, Jim Jones & The Righteous Mind has announced details of its hotly anticipated follow-up CollectiV and a UK tour. The single, Sex Robot, will precede both.

Released on 08 March 2019 on Ma§onic Records via Cargo, CollectiV is a veritable sonic feast. Made from only the finest ingredients including rock’n’roll, chain gang chants, mutant soul and gospel, as well as the band’s own heavy lounge, this is the best release yet from singer Jim Jones, whose career has seen him front the legendary bands Thee Hypnotics, Black Moses and The Jim Jones Revue.

Sex Robot is released on 22 February.

Joining the band in spirit is The Rolling Stones’ Keith Richards, whose 1964 Gibson Hummingbird – the very guitar on which ‘Street Fighting Man’ and other classics were written and recorded – made its way into Jim Jones’ hands and within the grooves contained on CollectIV.

Crucially, these are appearances that build and emphasise the explosive music of Jim Jones & The Righteous Mind.

Commenting on the album, Jones says: “The idea was to take disparate influences and ideas and then bring them together. Just like in real life, these different elements work really well together.”

He continues: “Get together and get involved! It’s an important time for us all to break down the barriers, work together, and channel each other’s energies. And that’s exactly what we’ve done on CollectiV.”

He’s not wrong. And in doing so, Jim Jones & The Righteous Mind have added a new volume to the great musical library.

Jim Jones & The Righteous Mind will tour the UK in the spring. They play:

More dates to be announced soon.

Jim Jones & The Righteous Mind is:

“Volume and sheer sonic attack. Superstition, catharsis, darkness, dynamics, the ghosts of music past and pointers to a new future” – Shindig

“Super Natural is an album that more than lives up to its name.” – The Quietus

“Jim Jones is clearly in the business of thwarting expectations; no bad thing when the group are as good as this… it’s controlled chaos and The Righteous Mind deliver on all levels tonight” – Louder Than War