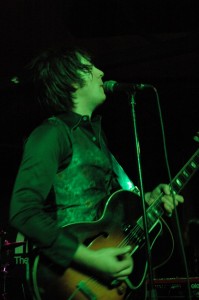 Jim Jones And The Righteous Mind/

Jim Jones and friends tone down the primordial rockin’ and get all slinky on us. Sterling support from Miss Suzie Stapleton who is gonna be huge. You heard it here first…..

I have tinnitus. I’ve had it for about three years. And quite frankly, I blame it on Jim Jones. Going to see The Jim Jones Revue a few years back in The Captain’s Rest (which was a tiny basement venue in Glasgow’s West End) was a great idea. The band were absolutely on fire that night and the capacity (well, the 80 or so hardy souls who crammed in) crowd were well up for a dose of fiery, testifying rock and roll delivered in the break-neck style and with the panache that JJ had patented for several years. I was standing right in front of two cranked-to-the-max Fender Twin Reverb amplifiers, which in retrospect wasn’t that great an idea; the ringing in my ears took several days to subside and is still there to a greater or lesser extent. That might just be because I’m a decrepit old fart who’s seen too many loud bands but I like to blame Jim Jones. It’s kinda like a badge of notoriety that I’ve bestowed on their royally glorious racket.

Consequently, I approached this one with a hint of nerves if not a set of ear-plugs. I shouldn’t have worried; The Righteous Mind are a much more restrained beast but lose none of the carnal power of any previous Jim Jones endeavour. With a four-piece band (not counting himself on guitar) which at times includes pedal steel, keys, double bass and tonight at least, Jim Sclavunos from The Bad Seeds on drums, it’s a heady mix which at times recalls Tom Waits circa Nighthawks In the Diner and at others the glam stomp of The Heartbreakers. Jones is all feral abstemiousness; he says little but is completely in command.

The band can swerve imperiously from the smoky acapella-and-handclaps field-blues of Hold Up into a sultry groove not unlike Dr John’s juju at a glance. David Page’s pedal steel at times sounds like a theremin and gives much of the material a spooky, psych-scape rather than the expected country-fried overlay. Jones is clearly in the business of thwarting expectations; no bad thing when the group are as good as this. Gavin Jay from The JJ Revue remains on bass but as often as not supplants his ridiculously low-slung Rickenbacker for a double bass and supplies much of the backing vocals that are central to the sound.

Of course, it’s Jim Jones. The band are all clad in as dapper and elegant a manner as the man himself and they really seem to feed off of each other’s virtuosity. They can vamp over a three-note riff, take it apart and make it hypnotic, savage and soothing seemingly on a whim. The Bad Seeds have been mentioned as an influence or touchstone but I was reminded more of 16 Horsepower and The Tindersticks in the early part of the set. There’s elements of country, Tav Falco-style crooning and psych, yes, but this band at times are entirely an entity of their own.  With current EP lead-song Boil Yer Blood a clanging, corporeal beast placed early in the set, the challenge of winning over the crowd isn’t easy.

Broadcast is easily the best venue in the city for this type of music; low ceiling, great acoustics and a sweaty, punk-ish vibe make it perfect for eyeball-to eyeball rock and roll. With a trinity of three songs that take the mercury down dramatically, Jones keeps the impetus rolling along. Save My Life and Shallow Grave see the double bass deployed and Sclavunos is imperious, with beaters replacing sticks.

The latter part of the set is more familiar territory. Guitars chop, Jones calls down the blues and sizzling feedback is utilized as Jay manages to knock over both his mic stand and the double bass from it’s refuge behind him. It’s controlled chaos and The Righteous Mind deliver on all levels tonight. The aforementioned Heartbreakers are evident in Aldecide, possibly slightly ironic given Jones’s sharing a stage with Walter Lure a few weeks back at The Revue’s final show.

Special mention to opening act Suzie Stapleton who recently wowed many Glaswegians with her opening slot for fellow-antipodean (and of course, Bad Seed) Mick Harvey at the much bigger Oran Mor a few months ago.

Armed with simply a Les Paul and her haunting swagger of a voice, she made many new friends tonight. With a selection of songs from her current album Obladi Diablo, this is a lady that is simply too good to be ignored. The records she’s released have a band backing her but tonight she just opened her mouth and owned it. Including Song Of The Artesian Water (reviewed here) referencing the city was a clever high point of the set.  Remember the name.

Jim Jones and the Righteous Mind are on the internet here, and Facebook.