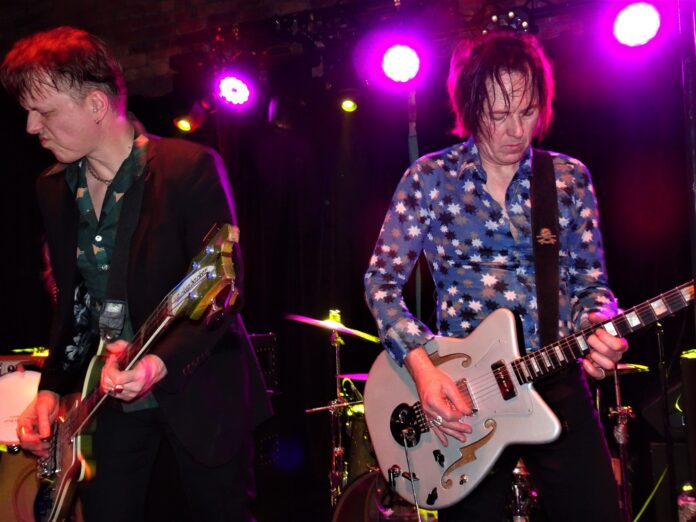 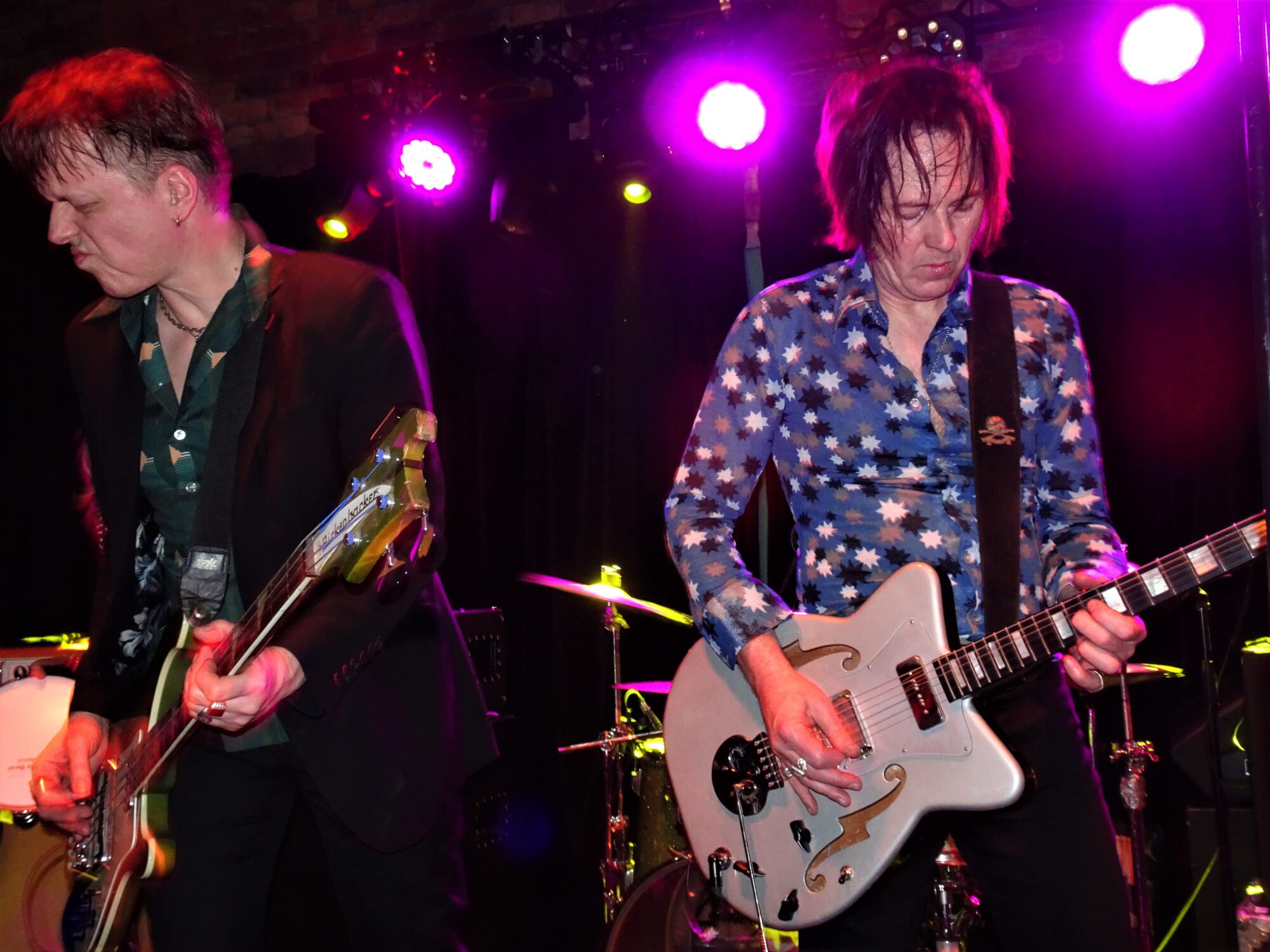 The secret is finally out, and Jim Jones is back in the fold, bigger, better and even noisier than ever before with his new band, the All Stars. Ian Corbridge is right there on the front row for Louder Than War amidst the lovely market town of Hebden Bridge to finally get down and get with it, and not before time.

Whilst the mighty juggernaut that is The Righteous Mind got horribly derailed by that dreaded virus, Jim Jones has never been an artist to let the grass grow under his feet for very long at all, even after an extended hiatus such as this. And so it proves, as Jim gathers a new and expanded bunch of stellar musicians, some familiar but some less so, brands them as the All Stars and then unleashes them on an highly expectant public in a bunch of gigs around the UK. Tonight the rural market town of Hebden Bridge braces itself for an unholy racket and a night of unruly rock’n’roll mayhem, and they are not to be disappointed.

It’s almost inconceivable that it is 29 months since Jim Jones last ventured out to perform in these northern parts of England but that magnificent gig at Night & Day in Manchester still lives long in the memory. Suffice to say, all the momentum that had been built up by The Righteous Mind came to a grinding halt with lockdown, and the impact of all that prevailed on a bunch of disparately located musicians meant that the logistics of it all proved too much of a barrier to continue, at least for a good while. But how long could the frenzied appetite of a passionate performer like Jim Jones cope in times of isolation before insanity took over I’ve wondered, not to mention those of us who love to see him perform? Well tonight my friends, all our prayers are answered.

At least through lockdown, Jim managed to build his own home studio in his garden which will hopefully reap benefits for us all in the future. But none of the madness going on in the outside world could stop opportunities coming Jim’s way and something just had to give in the end. In the end, fate has delivered yet another rebirth or as Jim put it, “Necessity, being the mother of invention, surprised us all when she delivered a healthy, heavyweight, blue-eyed amalgam of incendiary ramalama soul”. Jim calls them the All Stars and who are we to disagree with a name like that. Alongside Jim on vocals and guitar, Jim Jones All Stars include his constant companion on bass, Gavin Jay, and another former Jim Jones Revue stalwart, Elliot Mortimer, on piano. Then we have guitarist Carlton Mounsher, drummer Chris Ellul, Ali Jones on percussion and backing vocals and a beast of a three-way tenor/baritone sax attack of Stuart Dace, Chuchi Malapersona and Tom Hodges. For tonight’s gig, we just have the two sax attack of Stuart and Tom. 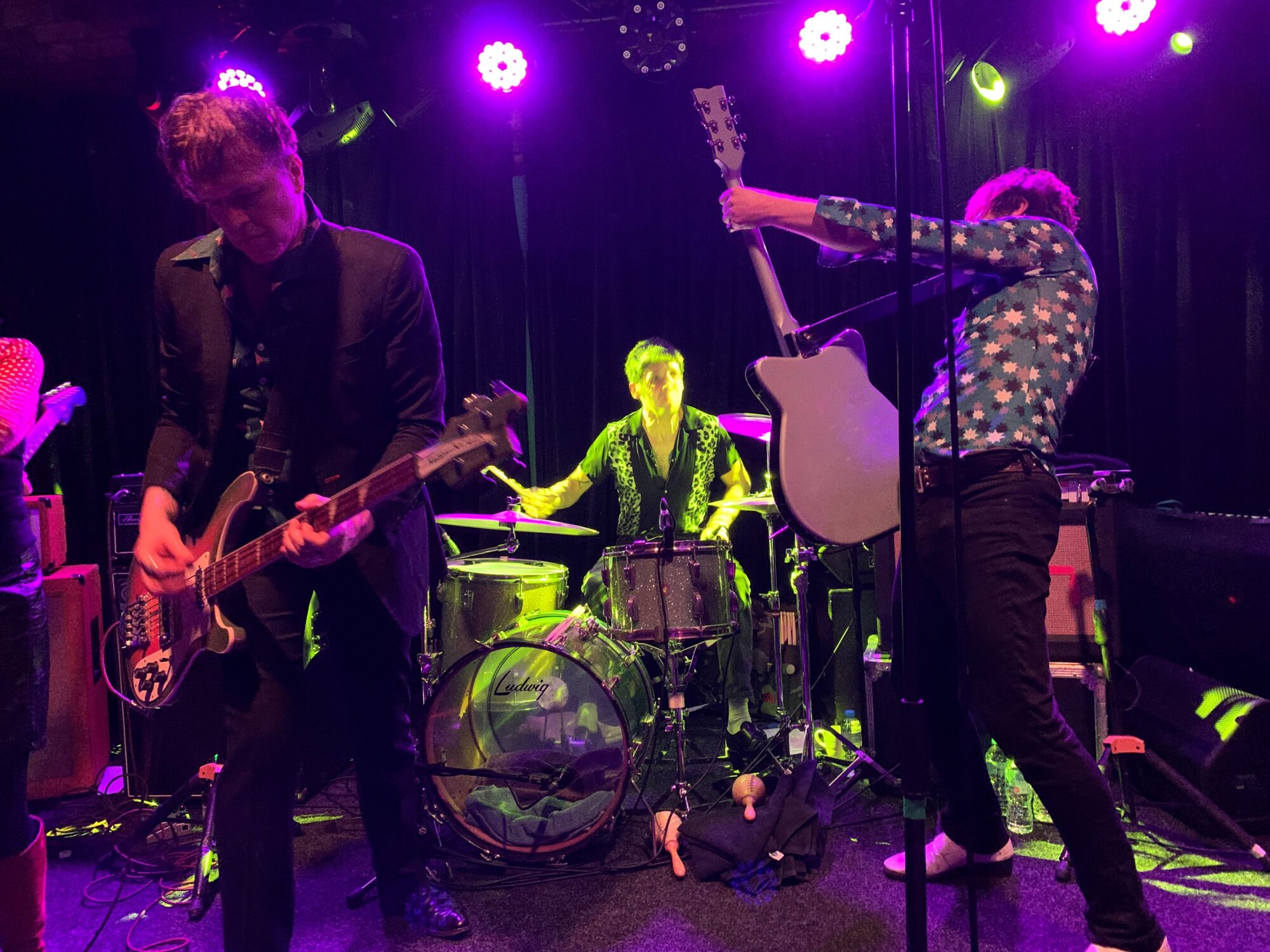 The anticipation in the sold-out Trades Club is palpable and there’s a real buzz around as so many people, including myself, meet up with friends we haven’t seen for quite some time due to those events well outside our control. But here we are, and Jim Jones is about to enter stage right and none of us would rather be anywhere else.

The set kicks off in fine style with a staple from the Jim Jones Revue live set, Cement Mixer, often dedicated to the “burlesque dancers” in the audience. None of that tonight but as Jim prompts the first of many sing-a-longs with “here we go, nice and slow” along to the crunching backbeat, this positively steamrollers the night into action. This leads quickly into a classic cut from the mid ’60s by Don Gardner, My Baby Likes To Boogaloo, which seems to take a classic soul song and add a twist of grunge as the twin sax attack wails into action. The stall is already set for the night and we all know this is going to be a full-on sonic landslide.

A magnificent cover of The Cramps’ Human Fly really gets an intense groove going before leading back into early 60s northern soul with Carl Lester’s When You See Me Hurt, with the drums and sax excelling once again in this rock’n’roll take. And what can you say about an explosive and truly passionate version of the Revue’s Burning Your House Down which almost takes the roof off the Trades Club.

We get a slight sonic reprieve as Stuart takes a lead on tenor sax through an old delta blues song, Parchman Farm which then leads onto another low-down dirty blues stomper, Can’t Believe. Things then go even deeper into the swamps with Run Run Run which is infused with soul and feeling before swooping back into the more stripped-down gospel-infused territory of Satan’s Got His Heart Set On You, from the Righteous Mind’s back catalogue. Underwritten by Gavin’s driving bass, this one has Elliot’s rolling keys and a rhythm dominated by the saxophones all over it. Class.

Me And My Monkey would have slotted in seamlessly with any seedy rock’n’roll club back in the early ’60s, whilst a cover of Little Jimmy Ray’s You Need To Fall In Love is nothing less than mean and moody and riddled with soul. Then it’s straight back to the deep and heavy grooves of The Cramps’ Can’t Find My Mind and the psychedelic overtones of Goin’ Down with Carlton taking a great leading line on the guitar. Voodoo Workin’ E is pure rhythm and blues very much in the style of a classic Wilko Johnson workout.

Troglodyte is exactly as the title would suggest; dirty funky caveman rock before we moved back into maximum rock’n’roll territory with a great cover of Little Richard’s Slippin’ And Slidin’ and a wild and chaotic Rock’n’Roll Psychosis, dipping back into the Revue’s back catalogue once again. Base Is Loaded is an absolute monster of a tune from the Righteous Mind songbook, and tonight’s version was no exception with Jim and Carlton trading guitars upfront and Gavin’s thundering bass holding it all together.

So now we come to the final song of the night and its not easy to predict how The All Stars are going to close this one out. But what better way to conclude proceedings than the psychedelic garage rock classic from Thee Hypnotics that is Shakedown. With an incendiary mix of all that was great about the likes of the MC5, the Stooges and The Cramps all thrown into one feverish and evangelical mix, this is a storming and climactic end to a triumphant return to live action for Jim Jones and the All Stars. Thankfully it wasn’t a local storm that blew the roof off the Trades Club this time but Jim Jones and his magnificent band of All Stars. A new beginning has been unleashed with all the swagger, power and intensity you would expect, and the world needs to step up and take notice because it is not going to go away any time soon.

Current plans for Jim Jones All Stars include writing a bunch of new material and then heading over to Memphis in May 2022 to record an album. So whilst The Righteous Mind are on hold, the All Stars are now very much the focus and with Jim Jones at the helm, literally anything is possible. So come on all you righteous people, its going to be another wild ride so get on board and do not be left behind.

You can find Jim Jones All Stars on Facebook