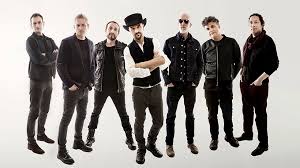 Many groups change rosters over the years, for many reasons. Fallouts, dropouts or get-outs to explore different paths. James, the world-renowned and continually innovative and current, musically, politically and culturally, are no exception to this. Members have been and gone, some more than once. This hasn’t stopped the group from succeeding, once they’ve focused on it. Groups are families; occasionally, members fall out. Fortunately, they make up. Except for between 2001 and 2008, as a unit James have been prolific, delivering music only they could. Experimental, diverse and able to gather a crowd and create unity and warmth through song and shared attitudes, they are equally powerful live.

Jim Glennie, bassist and member of the band from day one, has seen it all over the years; tough times, the hits, and present at those gigs that go down in history as the stuff of legend. He’s helped steer the group in new directions and keep on doing what they do best – making music that makes the world a better place to be in. Amidst the drudgery, darkness and sometimes despair there’s James, who can always make any room into a dance floor. With stacks of tracks to choose from, from one of the most impressive back catalogues from any working band today, as well as newer material, seeing James live is a truly joyous and memorable occasion. Nostalgia, rock and roll and a reminder of how music bonds people. This year, they’re on the line up at the legendary Isle of Wight Festival 2019. LTW caught up with Jim, ahead of that, for a quick chat. 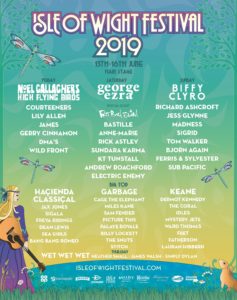 Louder Than War: Is the Isle of Wight Festival one that you lot always wanted to play? I know the first time you did was in 2008, just after the comeback.

Jim Glennie (James) I think there’s so much history to it. Saul, our guitarist, was there for the first one. It’s always nice to be a part of something so big and iconic. Festivals are special. Isle of Wight is such a chilled one, considering how massive it is and how many people attend. It’s one we’ve loved playing and we’re delighted to be playing it again this year.

Do you have a favourite festival memory?

Glastonbury is always a bit special. I remember the last time we played it, the day after the Brexit referendum result. We opened the festival – that was a special experience in itself. With all the uncertainty and worry, it was great to just see all those people forgetting everything for a while and enjoying themselves, singing and dancing in the rain and mud. That’s the one that springs to mind. I think every festival is special in its own way, for different reasons. Whenever James play Glastonbury it always seems to bucket it down! I don’t know what it is with us, Glasto and rain. It never stops us having a good time though.

Who are you looking forward to seeing this year at IOW?

To be honest I’m not sure we’ll have a lot of time, as we’re playing Heaton Park on Saturday supporting the Courteeners. We’ll sort of be in and out, which is a bit of a shame, but such is life. We might get to hear some of their set, as they’re on before us on the Friday at IOW. We always love seeing who we can, but as I say, it doesn’t work out that way, often.

Any new material written, or in Progress? Any chance of any sneak peeks at IOW?

We’re working on a new record. We’ve another writing session left, and then it should be ready to start the real donkey work; pulling stuff together, cutting bits out, working out what to keep in, etc. It’s a slog, doing all that, but essential. That’s the bit with little excitement at times; saying that, it’s always nice to get a finished product at the end of it. We’ve nothing new finished and ready for IOW. I think it will be next year that the new album hits, hopefully.

Seeing James live is a very special experience, as a fan. What’s it like from your side, for you guys?

We are blessed to have an incredible fan base, who have always bought into what we’re all about. The power music has to unite people and create something memorable. That buzz you get off seeing the appreciation and participation is the adrenaline that gets you through, sometimes. It can be tough, gigging. You get tired when you’re at it over several nights. Not that I’m complaining. It’s the best job in the world and I feel lucky. That’s what keeps us going, as a live act. Whatever we play the fans are happy. They know with us you’ll get a surprise song you’re not expecting, or maybe not hear the big tune you banked on. Our long terms fans accept that. The understanding we have is incredible.

Is it hard to choose a set, with so much music now to choose from?

It can be a ball-ache! It’s a nice problem to have, though. Because we have a lot of material we can rest big tunes. If we’re touring to promote a recent album, then we’ll tend to play a few from that, as you’d expect. Generally, we choose on the day. Occasionally there are disagreements but we resolve those. The other thing is judging it too, on the vibe and atmosphere. If we’re playing a festival and it’s raining and we want to keep the energy up, we might play a big tune, or upbeat number. There are no set rules to it, nothing too rigid. We have a plan, but also take it as it comes.

Have you or/and the others found coping with being away from home any easier over the years? Does it help having a sort of surrogate/second family, in the fans?

It’s tough at times and can cause issues. Some of the group have young kids. Mine are all grown up now. We support one another and all try to be as understanding as possible these days. The thing is, we aren’t the only people on the planet who work away for long periods; I mean, it isn’t just musicians. Lots of people do. It’s a choice you make, and a sacrifice, to some degree. Like I said earlier, the rush of playing to all those amazing people is the drug that gets you through, at times. So, yeah, the fans make it all worth it. It always amazes me people still want to come and pay to see live music, with the recession and everything, I mean. They still put their hands in their pockets for tickets. We always do our best to give them their money’s worth.

One last question, Jim: as you’ve been there from the off, what would you attribute the success of James to? Not just selling out venues and doing well commercially, but also in terms of longevity and growth as a group?

Good question. Sometimes I’m not really sure, to be honest. I think we’ve all always wanted the same things, when it comes to what matters; to make music and make people happy, whilst enjoying doing that. We tend to communicate more openly and better nowadays. The fact we’ve overcome differences has kept us solid, I think. There’s been times that over the years Tim and I, for example, haven’t spoke for a while. You learn to let stuff go and not let the petty issues get in the way of what’s really the best job in the world, that many people would give their right arm for. Maybe keeping an eye on what’s going on around the world, too, has kept us relevant. We certainly try to be. There’s a lot of dark stuff happening around the planet, with this horrible threat of the rise of the right wing, etc. I suppose we hope to be an antidote to some of it; Tim does, in his lyrics – but isn’t frightened of taking the piss out of himself, either. That’s important. I think hope is crucial too, and if our music can provide some, that’s wonderful.

All words by Benjamin Francis Cassidy. For more of his work please visit his author profile.