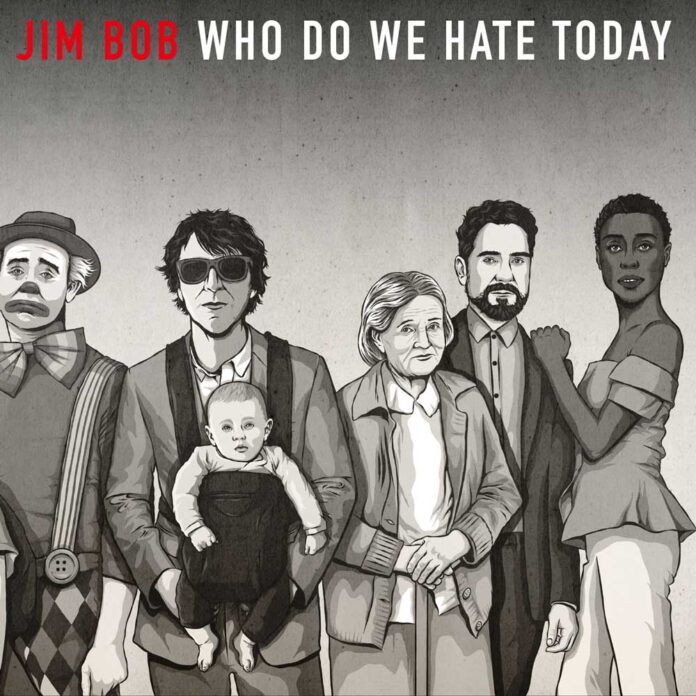 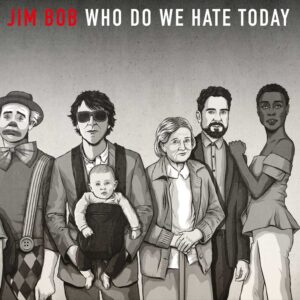 Who Do We Hate Today

Jim Bob returns with another dose of clever wordplay and catchy songs that encapsulate his world wise view of modern Britain. Wayne AF Carey investigates the follow up to the clever musings of his last album Pop Up Jim Bob…

The bug of writing clever songs has never left old J.B. Morrison. Almost exactly to the year from his last solo outing he delves into the observations of a Britain that has been battered by a pandemic and left impressions on his mind that only he can get out to the indie punk loving public. Just over 37 minutes of wit, sarcasm and sadness that makes you laugh and cry at the same time.

The intro Jims Bed Of Unease starts with a barrage of voices having a heated debate which kicks into the no nonsense punk of The Earth Bleeds Out which clocks in at just 1:18, a cry out to the state the planet is in: “Now getting a tan in Alaska’s a thing, it’s summer in winter and autumn in spring” Shona Is Dating A Drunk Woman Hating Neanderthal Man is a cracking little indie number that tells an observational little story that rings true in every part of Britain. We’ve all seen these characters at one point in our lives. Full of melody and typical Jim Bob at his best.

#prayfortony portrays another despised human being who thinks he’s some kind of God. Opinionated gammons take note. Although would you be really listening to this?… Another sad depiction and a great little number layered with strings and sarcasm. Where’s The Backdoor Steve is a funky little tune that goes keyboard crazy in parts, yet the lyrics are all about finding a backdoor from an imaginary computer system to get out of this mess. “Is there a way out of this? Maybe there’s a reset somewhere, A system override, a switch along the side or underneath, Where’d you put the reset Steve?” I’m guessing he’s talking about Jobs here yet I may be wrong Jim! A chugging little guitar riff and simple drums roll in for Karen Is Thinking Of Changing Her Name. Why the fuck she wants to change her name is anyone’s guess. Jim Bob being cryptic yet again. A lovely witty tune.

Longest track on the album A Random Act is one of the highlights. Kicking off with some great samples of news pieces, a tribal drumbeat and a dark underbelly soundtrack of social media brainwashing, terrorism and random acts of violence that are seen too often nowadays. The lyrics are like reading a diary of an unsettled observer who witnesses something we all would rather avoid. “It’s an act with no obvious reason or rhyme, but on the socials we’ve already made up our minds, we’re like a human Shazam app for psychopaths and terrorists, it’s a sleeper cell awakened, it’s a lone lunatic. The scariest thing of all is there’s nothing you can do, anything can happen and it can happen to you.” Jim Bob goes on to recognise the bravery of people with kindness who go all out to help with the lines “For every act of mindless, hateful, cowardly cold blood, there’s a hundred acts of kindness, caring, bravery and love” It’s the way he can meld his lyrics into moody music and thrill as always.

The Summer Of Not Touching is a glam stomp that describes the lockdown in details. Seeing stars again, no cars, deserted streets. A fuckin’ hilarious line in there “Me, I get my facts from whatever David Icke says, and from old rock stars from the nineteen nineties” And the more hilarious line “And me? I’m still waiting outside Tesco’s, self medicating with my Domestos” Classic. Song For The Unsung (You’re So Modest, You’ll Never Think This Song Is About You ) is another funky number full of la la la’s and brings the whole listen to a happy moment. It’s a love song to the planet and a bit of a twist on the Carly Simon song I don’t need to mention. PS: It sounds fuck all like it! Men is Jim Bob going punk on us again. A hark back to the Carter days with some great drumming and strumming. My partner would love this song as she gets all het up occasionally with men being aggressors in all the things going wrong in the world. I’m not showing her this verse! – “Men with the muscle, the balls and the hustle, Men start the wars and the fires, Go-getting, goose-stepping, home-wrecking, bed-wetting, Men. Pathological liars, if men are from Mars, maybe they should go back there, use some of their hot air for fuel.” Fuckin’ ‘ell…

Evan Knows The Sirens is the sister song to Glam Rock Cops if I’ve ever heard one. More stark lyrics that touches on mental health issues. A fear of sirens that have destroyed his family. Eerie as fuck yet a masterpiece of glam from the Bob. The Loneliest Elephant In The Word is a proper tear jerker. A maudlin piano plays against lyrics that touch you from the point of a caged animal that never forgets. A sort of twisted love song to another elephant that gives me vibes of what Steve Ignorant does, emotional street tales that hit. The album ends with the title track and it fades out as the album begins with the barrage of voices that go loud then fade into a distorted sound effect of a dying tape machine. Excellent yet again from a clever guy who keeps on giving and is probably one of the best storytellers around. A master of lyrics and a songwriting treasure.

Credit must be given to all the contributors who played on this album: Ben Murray, Chris Thorpe-Tracey, Jen Macro and John Clayton.