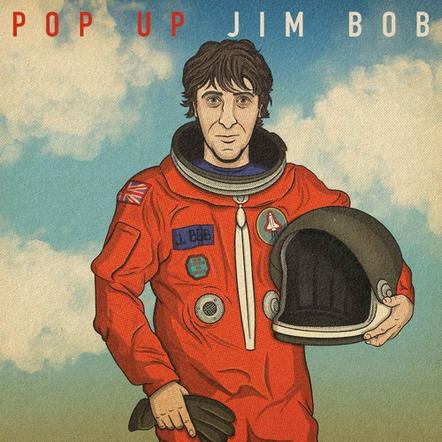 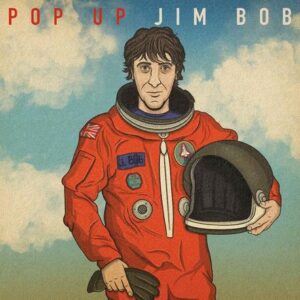 Jim Bob returns after seven years with a new solo album that has all the old trademarks of his Carter days and it has all the old wit, charm and clever lyrics from the arsenal of his mind, yet it’s bleak and dark. Wayne AF Carey checks it out…

His press release says these are brand new songs written by a man who can’t escape being compared to Jim Bob from Carter The Unstoppable Sex Machine… That’s because he is fuckin’ Jim Bob from Carter The Unstoppable Sex Machine! His voice is that familiar that any Carter fan (I was one of them) will know that his Cockney monotones can never be anything else. I saw Jim Bob being interviewed at our very own Louder Than Words festival last year and he is every bit the same man on record. Funny as fuck, observant and clever. He loves to twist those cliches we hear every day into brilliant little songs that stand out. Even the album artwork displays his humour, dressing up as a cowboy, a doctor, a postman, an astronaut and an WW1 soldier, all in cartoon form.

Opening track Turn On, Tune In, Pop Up is just a small taster intro to ease you in to this short yet catchy collection of his thoughts today. Jo’s Got Papercuts starts with a classic chug and crescends into a top as fuck chorus filled with pianos and cutting lyrics; “And every day she’s doing her best to say sober, but people keep fucking her over” Great stuff!

Kidstrike! is shit hot. A proper anthem with the usual samples and a tale of street uneasiness with the youngsters of today. A proper call to arms for the younger generation. A great line of “Not throwing stones, but singing Seven Nation Army through robot voice changer megaphones” He can pen a catchy tune as easy as fuck.

Ted Talks ramps it up a bit with the catchy guitars and more clever lyrics which I interpret to be about an ex soldier who goes a bit fuckin mental after witnessing some horrors of army days. Reminds me of Bloodsport For All a lot and there’s a cracking line in there “Ted Whispers to his attorney, the words of a chorus from a song by the rock band Journey” Classic.

Truce is a dark clever number that goes all film noir with themes of people banding together in a different reality from ours. A great piece of spoken word and dreams of peace like in the line “A white supremacist exchanged presents and pleasantries with a Rasta from Trinidad”. A chilling essay in what could be…

2020 WTF! is a top as fuck short sharp blast of punk that ends as quick as it begins. Brilliant!

If It Ain’t Broke is another catchy as fuck bastard having a pop at the polluters and frackers who poison the land. “Say it don’t spray it”… A proper blast back to the Carter days here, exciting and singalong style with his trademark guitars.

Big Boy is a more keyboard laden tune, going dark and back to basics. It actually reminds me of something off Pink Floyd’s Final Cut. A proper nod to Roger Waters here. There’s the lyrics about not being paranoid. “From my hat down to my socks, I’m a walking contradiction” Makes you think this one…

Barry’s On Safari (In His Safari Suit) is hilarious yet not. A proper upbeat number telling the tale of a Britain First loving thug who gets pissed with his like minded mates. You get the picture. Knuckle scraping fuckers with less than half a brain. Great glam number though with the clapping and that great drum and guitar glam combo.

#thoughtsandprayers is probably the saddest song on here. It covers immigration, homophobia, racism, natural disasters, radicalisation, religion, poverty, terrorism. Fuck, it’s dark. I could go on. A sad spoken word lament of how fucked up this planet this… If this doesn’t get to you, nothing will.

It all ends with You’re Cancelled And We’re Done, a short story of Jim Bob and his wife escaping to the woods for some peace. Goes all Joy Division on you this one.

This is a really clever album that tears at the heart strings in places but gives you joy after a few listens. It’s not a concept album yet comes close with that Roger Waters vibe without being up his own arse. A great album that puts Jim Bob firmly in the place of one of our great lyricists and authors.