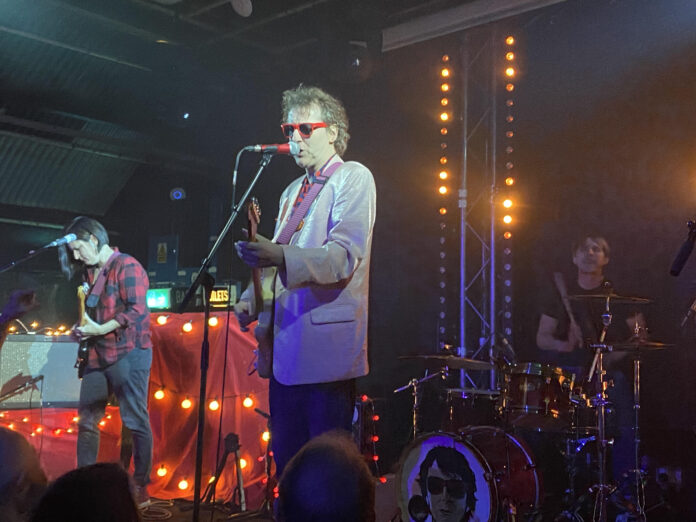 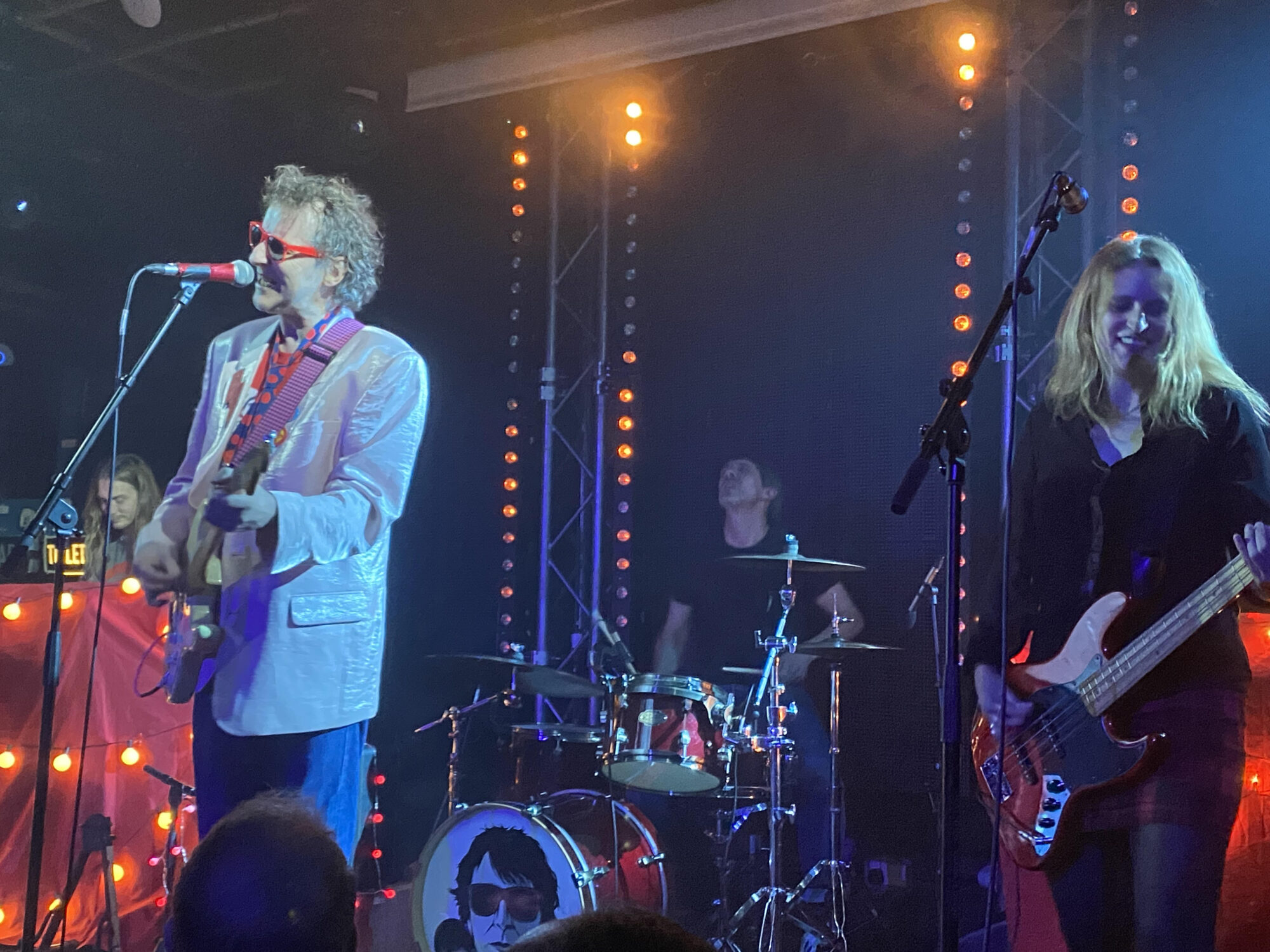 Jim Bob has come to town armed with his backing band The Hoodrats, ready to thrill with his sharp wit and a set of songs we know and love, stretching right back to his Carter years. Wham bam thank you mam is the calling card as Iain Key and Wayne AF Carey do the tag team review of a night full of glory.

Iain and I have been looking forward to this one for months and we excitedly trundle from The Innside from our very own Louder Than Words Festival after witnessing a cracking interview with our main man John Robb and Will Sergeant which is a masterclass of Will’s banter and John’s easy on the ears interview style which is second to none as usual. I’m here to see a band that our Manchester underground are raving about at the moment. 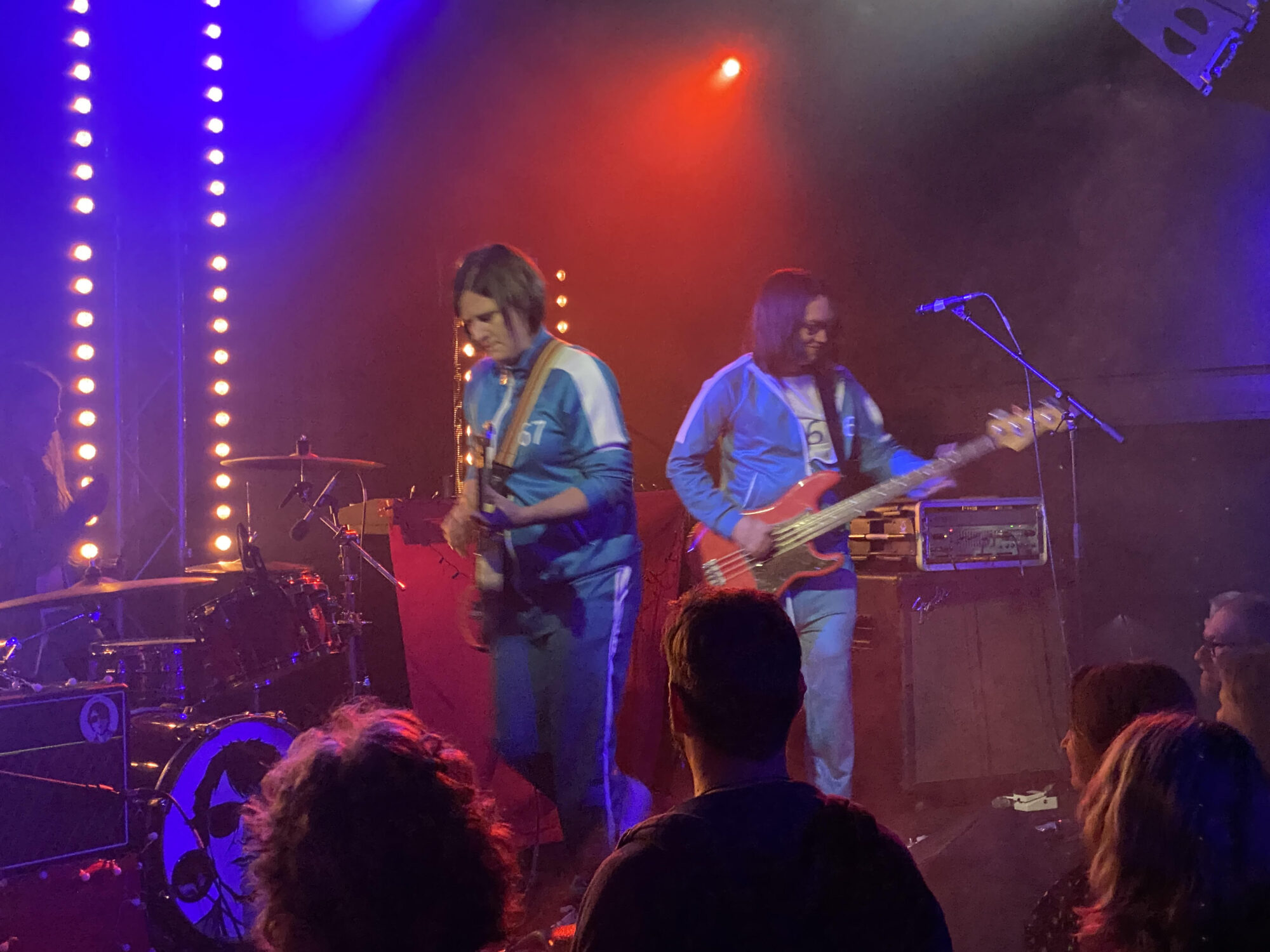 Hurtling are a great power trio that are here to rock. They hit the stage in their snazzy green matching tracksuits with a great onslaught of nineties shoegaze indie grunge straight out of the Quality Street box of Sleeper, Throwing Muses, a touch of Hole and a close cousin to the power of the mighty Mysterines. A sharp slick set of powerhouse tunes that are well crafted and get everyone’s attention for this early start of a gig, which for some bizarre reason kicks off at 6.30 pm. They have great stage presence, the vocals are pitch-perfect and they have the loud quiet element of grunge off to a tee. A top as fuck band that will surely be all over the scene in a short time.

Over to Iain Key: 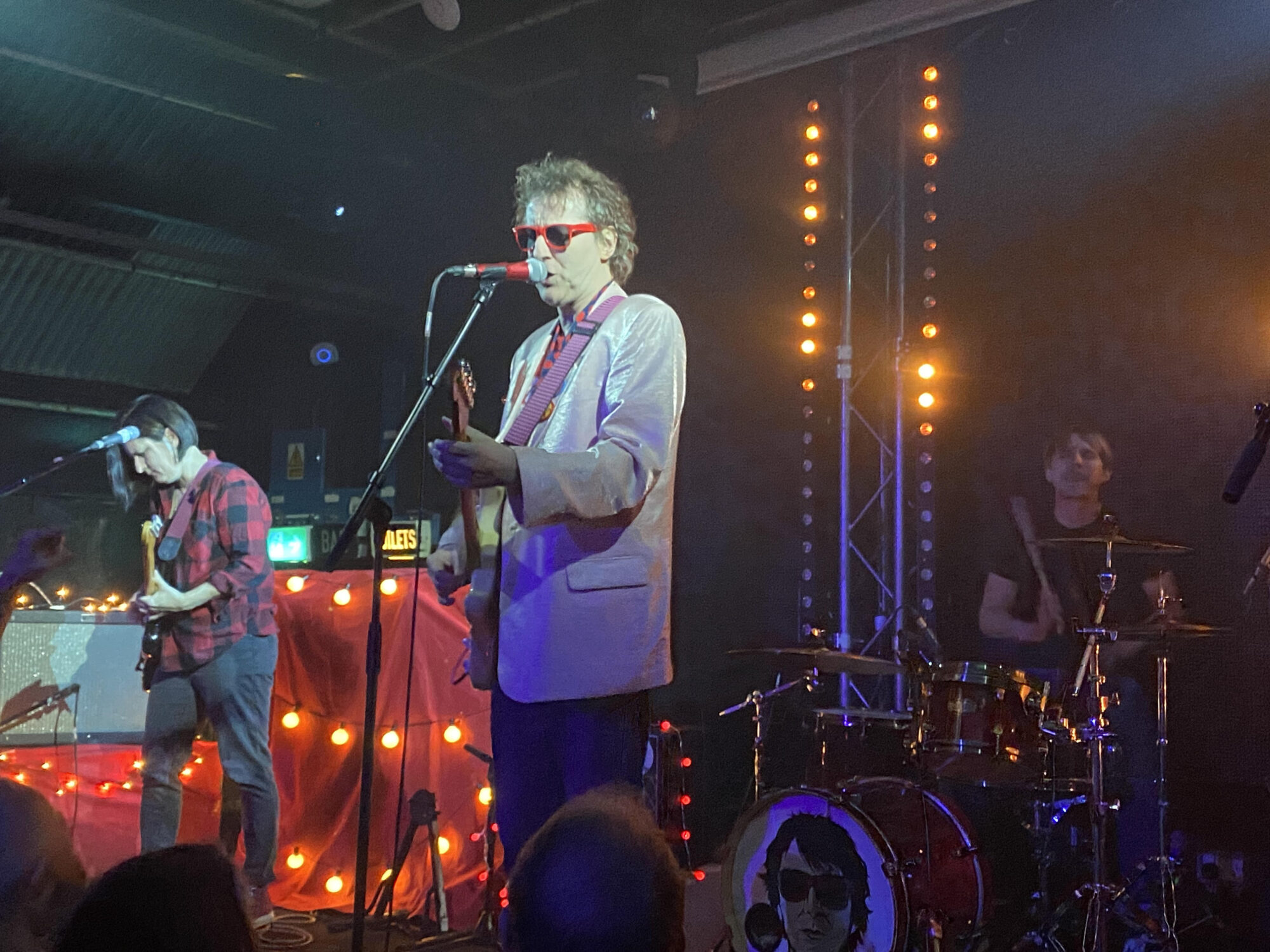 30 Something, the number of years since I’d regularly be in the crowd to watch the man on stage at Gorilla tonight, stood alongside Fruitbat gigging with their drum machine, whipping the crowd into a frenzy. It would appear I’m not the only one considering the number of 30, 40 and 50 Something T-Shirts (although no cycle caps) and the slightly aging demographic attending tonight’s show.

Whilst we may all be older our love for James Robert Morrison, aka Jim Bob has not faded with almost 600 in the popular Manchester venue. While Carter The Unstoppable Sex Machine may have originally split in the 90’s, Jim Bob has still always been here. His songwriting skills and ability to be poignant, cutting and funny at the same time have never diminished either; especially demonstrated on the albums he’s released in the last couple of years, Pop Up Jim Bob and Who Do We Hate Today?

After seeing Jim Bob as part of Carter a number of times and solo armed with just his guitar it was strange to see him initially take the stage accompanied by 5 piece backing band The Hoodrats tonight; but wow, what a band. Jen (lead guitar) and Jon (organ/synths) are from support band Hurtling then we have Ben (drums); Lindsey (bass) and Chris (piano). They really lift and fill the sound of the record to another level.

Kicking off the set with While The Earth Bleeds Out and the straight into 2020WTF! it’s a breakneck start that takes your breath away, then the main man introduces KIDSTRIKE!, and we’re off again. The front section of the crowd have been moving a bit from the start but it’s with the fourth song, Sealed With A Glasgow Kiss that the mosh pit really erupts almost to the halfway point of the venue. It’s a well-balanced set throughout the night, Carter classics mixed with recent tracks and those from his earlier solo career. Following Lean On Me (I Won’t Fall Over) we get one of the highlights of the most recent album Shona Is Dating A Drunk, Woman Hating Neanderthal Man. It’s a mini kitchen sink drama all too sadly set in reality but offers hope. An example of Jim Bob’s word-smithery proving he’s every bit a poet as John Cooper Clarke.

The first part of the show comes to an end with an epic Falling On A Bruise, transformed into a cinematic, widescreen experience which sees the whole crowd joining in before it segues into The Final Comedown. Anyone expecting the full-on aural assault of yesteryear may have been a little surprised when all but the singer and keyboard player leave the stage and we get Jim Bob Vegas style. We’re treated to a stripped-down and piano-led quartet of Cartoon Dad; Good Greif Charlie Brown; Mrs Fucking MacMurphy (Teaches Food Technology) and Johnny Cash. It doesn’t feel out of place and underlines what a showman we are watching. The band rejoin the stage during the final track, adding backing vocals as well as a short refrain from Bowie’s Heroes.

The second part of the show kicks off with Jo’s Got Papercuts, If It Ain’t Broke and the magnificent The Loneliest Elephant before dipping back into Carter territory with The Only Loony Left In Town from the occasionally overlooked Worry Bomb. It gives the band an opportunity to really rock out, which they do with gusto. I don’t think I’ve seen a bass player look so happy. Lindsey jumps about, sings and manages to still keep the groove with the biggest of smiles, she’s like Tina Weymouth after far too many M&M’s.

This is followed by Prince In A Paupers grave, with the Germanic um pah pah replaced with cockney music hall piano (as per the Jim Bob Sings Again album) before building Carter fashion with all the dynamics you’d expect. If that wasn’t big enough, the main set then finishes with Angelstrike from the album of the same name.

I’m not sure how I feel about the shouts of ‘You Fat Bastard’ as Jim Bob returns to the stage for the encore. I guess it’s inevitable, with the wealth of later material on display tonight though it’s clear that the artist has moved on however some will still be stuck in the heady days of the early ’90s. After a solo You’re Cancelled And We’re Done the band arrive back on stage for a blistering Bloodsport For All.

The gig finishes with a superb singalong Touchy Feely plucked from Jim’s Super Stereoworld, with 3 fake finishes it’s euphorically expanded well over the 3 mins of the studio recording and leaves the crowd wandering into the Manchester night on a high.

Can we do it again next year, please?

Support band review and foreword by Wayne Carey, Reviews Editor for Louder Than War. His author profile is here