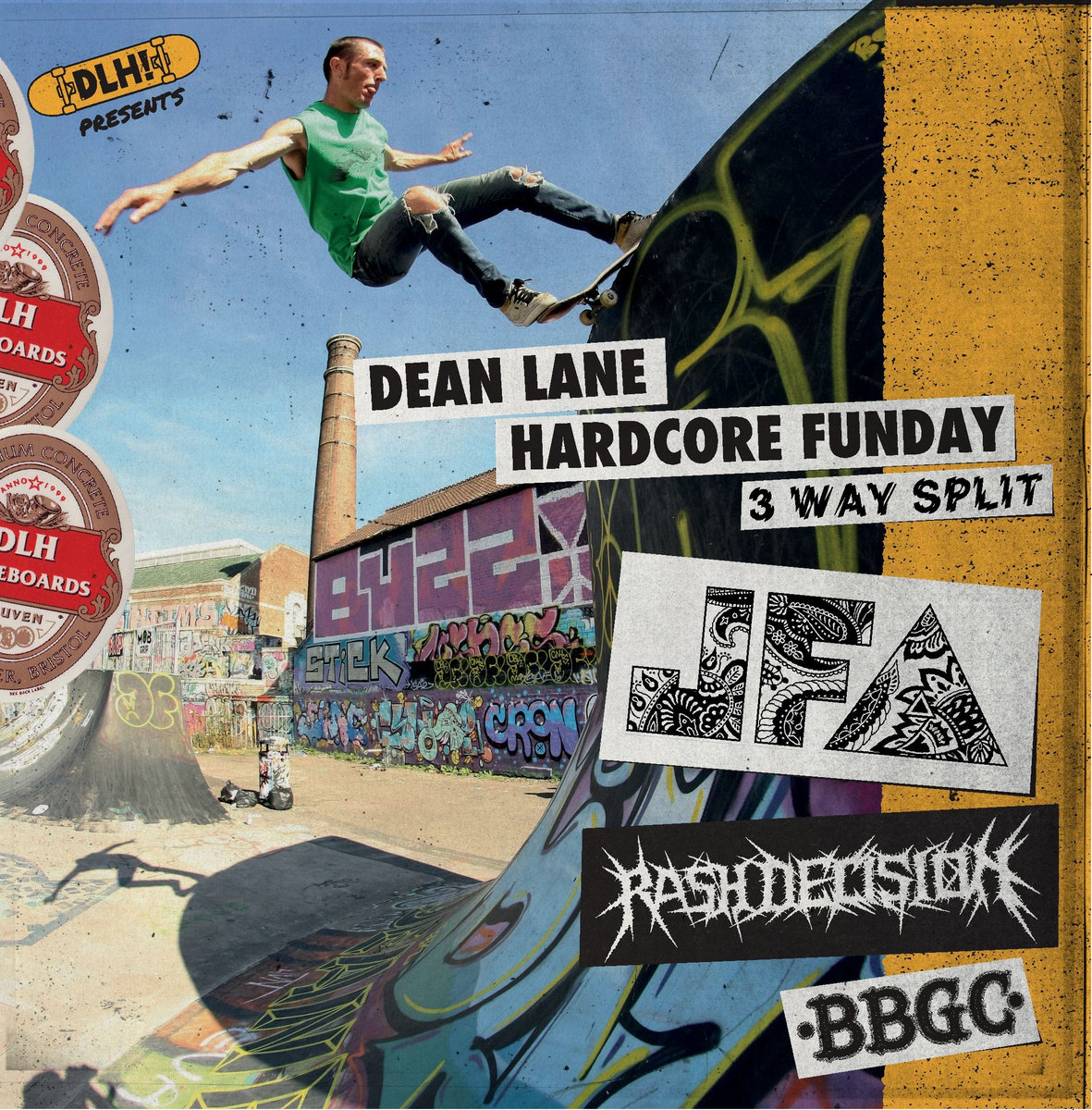 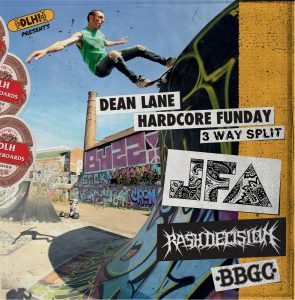 This EP is skating made vinyl (OK, I know skateboard wheels are made of vinyl, but you get what I mean).  Three bands, seven tracks, a blur of activity, spinning round like a 360.

JFA are a name many will know.  They were big in hardcore circles in the 80s but I never really got them so truth be told they passed me by.  They were big with skaters on account of their links to the SoCal skating scene. The three tracks they contribute to Dean Lane Hardcore Funday are live, and while I’m not a huge fan of live recordings, this recording of their straight up hardcore works pretty well. No More Excuses is a catchy little number that conjures up the steady rhythm as you cruise along the seafront. Skateboard and We Know You Suck are more of the same.

I have described Rash Decision for LTW before – hardcore punk with a dose of metal licks from Cornwall. XErnestXBorgnineX , a tribute to the ugliest man in film or TV, is a chunky old number with a speed metal solo at its close. Apathetic Intent is shouty hardcore with a chuggy midriff (by which I mean a riff in the middle of the song). Spent is the agony of smacking your elbow as you fall into the bowl. As the sample says “I think you’re all fucked in the head”.

Broken Bones Gentlemen’s Club is a name that says skate punk all over it (Bones Brigade anyone?).  And their speedy gnarly hardcore sound is the sound you make when you’ve got speed wobble at 30 mph and slammed chin first, getting gravel rash in the process. The guitar style and overall attitude exuding from this makes them sound a bit like Black Flag only more damaged – faster and screechier. To have a song about Hot Mayo means it must be a staple for this bunch of Bristolians.

If you were in any doubt the cover art has countless pictures of ramps, bowls and other skateboard related lunacy.  I’m guessing they played one of Bristol’s annual Dean Lane Skatepark Hardcore Funday outdoor punk gigs together.  This is hardcore punk for skaters and other lunatics who like fast music.  Like skating, it’s all about the experience so if you need to know any more you won’t like it. OK?

Get Dean Lane Hardcore Funday from Rash Decision who masterminded a limited vinyl run of 100 on see through red (Kryptonics anyone?) and the usual download.

Crappy skateboard references from Nathan Brown. More from Nathan can be found over at his Louder Than War Author Archive.