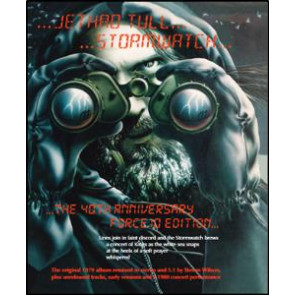 The latest in the series of often spectacular Tull re-issues.

Stormwatch is the album that they often call the third of the Tull folk rock trilogy and after Songs From The Wood and Heavy Horses (and their subsequent five star extended version in this series) it has a hard job to do. It’s an album much less rooted in the traditions of olde England than its predecessors, taking more of a focus on the environmental issues of the period. Tull go from the greenwood to the industries. The times they were a changin’ not only in the world in dealing with environmental and ecological issues but also in the world of Jethro Tull.

Rumblings in the personnel department saw John Glascock take leave from the fold due to ill health with Ian Anderson taking up the bulk of the bass duties. Glascock’s subsequent death during the tour for the album a shocking tragedy shock for the whole Tull enterprise, his parting shot remaining on Orion, Flying Dutchman and the beautiful Elegy.

So how has Steven Wilson done on the latest Tull offering as we move into the band’s mid history and after his sterling work on the early catalogue. First impressions are that we’ve got another of the superb packages to which  we’ve now become accustomed. The hardback format with the six discs of goodness tucked into the inside covers and a huge booklet to ponder. In addition to a Palmer/Anderson track-by-track guides, the contents are a detailed read of an account of the recordings and touring of the era from Webb with contributions from Ian Anderson who’s again taken an active role in re-issues of what’s essentially his life’s work, and also from Martin Barre, Dave Pegg and Dee Palmer. They offer the sort of insightful commentary you’d expect from a staunch but objective (and probably slightly obsessive) fan, but I’ve always found the Webb/Rees writing partnership a pleasure to read from their work in A New Day magazine and its offshoots.

And to the music. With a catalogue of work as strong as Tull’s, Stormwatch may not rank a  favourite amongst many – neither the best nor their worst work but a decent mid table work – so there’s the obvious chance to reassess the album itself.  One that often gets a raw deal, it’s new lease of life reveals a few pleasant reminders and surprises.

At the sort of surprise in reminding us what a good track Old Ghosts is, necessitating several sessions with the track on loop along with the fact that Dun Ringill remains one of the iconic ‘acoustic’ Tull tracks. The harder rock of Something’s On The Move and the rare non-Anderson piece, David Palmer’s Elegy,  that’s granted the honour as a soothing album closer. It may be that the higher profile numbers – North Sea Oil, Orion and the lengthy Dark Ages were the ones that would have stuck in the memory banks. There’s much less of the pastoral acoustic feel of the previous two albums and  more of a steely cold starkness about these three key tracks, although aside from Dun Ringill, Home offers a rare breath of warmth.

The disc of ‘associated recordings’ gathers odds and ends, some previously available so there’s a familiarity with songs from a fertile period such as kelpie, King Henry’s Madrigal and most people who buy this say will have their white vinyl 7” of A Stitch In Time. Broadford Bazaar that appeared on the Nightcap collection is always a pleasure although not ranking in the premier league of Tull songs.

The Lyricon Blues reminding us that this was Jethro Tull, a nod back to their Mick Abrahams period before they finally kiss goodbye to the Seventies and amongst the ‘previously unreleased’ (officially)  offerings, Man Of God (Anderson’s religious comments channelled on My God getting revamped) is a taught rocker.  Similarly ‘unreleased’ gems include A Single Man which seems like another try at the successful formula that emerged with Locomotive Breath, the extended piano intro leading into a general uninspired band contribution. Urban Apocalypse is cut from the same cloth although you can literally feel the fire in a more inspired rendition. It may be a bit of a mist mash with a live version of Sweet Dream thrown in at the end, but all part and parcel of the wrapping up of goods from the era.

The availability of decent concert recordings as we work our way along the Tull timeline sees a gig in Den Haag from March 1980 showcase Tull live at he start of the eighties. There’s an uninterrupted Stromwatch sequence to kick off the set, getting all the new stuff done in one fell swoop. The “we’re going to test your memories,” and we’re suddenly sitting on a park bench as Tull rip through the hits. There’s a batch of inevitable solo indulgence and a nice little folky section that includes Dave Pegg’s moment in the spotlight (aptly titled Peggy’s Pub) along with Jack In The green and the King Henry Madrigal, but it’s Thick As A Brick that seems to sway the Dutch. They holler and cheer like proper Americans through the acoustic intro although some might argue that it would struggle to meet the acoustic/electric riffs that make up Minstrel In The Gallery, especially when the stabs of organ make a move.

It’s also the days when the set finished with the ambushers and before the shows started to end with the familiar strains of Cheerio, but as a live set it proves a fitting swan song for several seemingly well-set band members.

Following the tour, Barriemore Barlow, John Evan and DavidPalmer left the band as Anderson proceeded with his solo project that ultimately became Tull’s A album and the boundaries between Ian Anderson the singer, flute player and acoustic guitarist and the band  presence of Jethro Tull started to become blurred. An era had passed.

The extra DVDs add 5.1 mixes and flat transfers which to the layman might be speaking a foreign language but you can bet they sound nice even on your budget surround sound system.  The Force 10 earns its place amongst the other Tull expanded editions that may sit on your shelf, and even if they’re a band you despise with a vengeance, acknowledge the quality of the job that goes into such grand productions.

Listen to North Sea Oil from the album here:

All words by Mike Ainscoe. You can find more of Mike’s writing on Louder Than War at his author’s archive. He can be found on Facebook