Home Blogs Jet Black rejoins The Stranglers for photo celebration of venue where they... 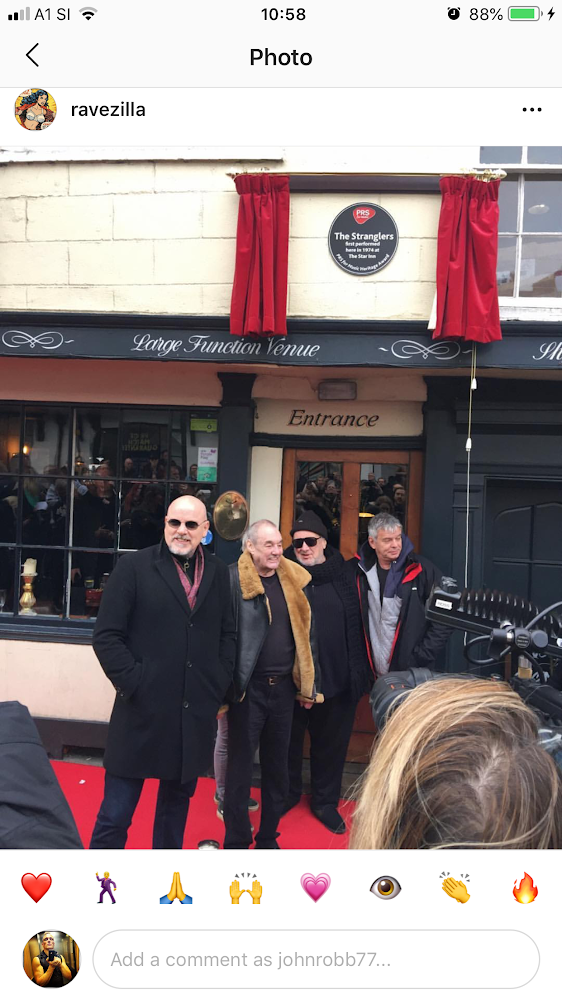 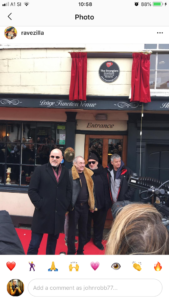 Photo stolen from the avarave Instagram account…go and join her now,

The iconic Jet Black rejoined The Stranglers for a photo session to commemorate the anniversary of the Guildford Star – the first venue then then three piece band played in 1974 which has just been awarded a plaque.

It was heartwarming to see the great man back with the band and looking in robust shape despite his 80 very odd years and joining the band in a celebration of the venue and also the crucial small venue circuit that is the lifeblood of the music scene.

Jean-Jacques Burnel said of the circuit. ‘The amount of music we produce in this country is incredible, but it’s in danger. If you don’t have grassroots venues, everything else dies.”

UK Music, the campaigning and lobbying group for the British music industry, says 35% of venues across the country have closed in the last decade. One issue is more residential properties being developed near music venues, which has made complaints about noise more common.

Jet Black, the Stranglers’ drummer and founding member, said: “These venues take years to evolve and when they get closed overnight, it’s a catastrophe. Our music industry is something we should nurture, cherish and appreciate. Other countries would give the best they have to have what we have.”

After presenting the Star Inn with a Music Heritage Award from the Performing Rights Society, Burnel and Baz Warne, the band’s current vocalist and guitarist, played a live acoustic set for friends and family including Strange Little Girl, a song they first played at the venue 45 years ago.

Keyboardist Dave Greenfield, who joined the band in 1975, months after their Star Inn gig, was also at the presentation.

The pub’s backroom music venue, which hosts around five gigs a week, is currently appealing against a noise abatement notice requiring them to reduce noise levels or face fines of up to £20,000.

Property developer Neil Young converted a former office that backed on to the pub into four flats before making the complaint to Guildford borough council last year. Shepherd Neame, the pub’s owners, said they warned Young that noise would be an issue when he applied for planning permission five years ago, but consent was granted by the council.

Black added: “The audience were expecting a folk band, and when they saw us, they were a bit shocked.”

The pub’s manager of 13 years, Georgina Baker, estimated that the business made between 30% and 40% of its profits from hosting gigs for up-and-coming bands. “We could turn the back room into a wedding reception venue and probably make a lot more money, but it’s important to us to keep this place running,” she said. “There’s a lot of pubs, but not many pubs which are home to such a vibrant music venue.”

A petition to save the pub gained 21,000 signatures last October. Folk singer Frank Turner, who also performed at the Star when he was starting out as a musician, was one of those who encouraged fans to sign up.

Students from the Academy of Contemporary Music’s Guildford campus use the venue to get used to performing in front of audiences. Baker said she believed these events were an important step in young artists’ careers. “People very rarely go from performing in their bedroom to Wembley – they need places like this to start with,” she said.

“If places like this close, you’re depriving an entire industry of a place to learn their craft – mainly entertaining the people of this country. Why would that not be a good and honourable thing to do?” said Black.

When the band played their first gig here, they were living above a now demolished off-licence about a quarter of a mile from the Star Inn. “It was the tail end of the pub rock days, so there were venues all over the south of England,” said Burnel.

Guildford’s mayor, Mike Parsons, said: “I think venues like the Star are necessary for up-and-coming bands. They need the chance to show off and get better. It’s a shame that venues like this are becoming rarer and rarer. I think we should do all we can to fight to keep these venues open.”