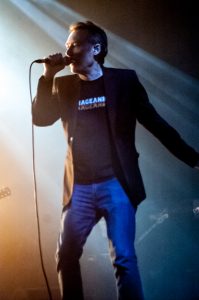 The Jesus & Mary Chain played the ABC in Glasgow on Saturday night, lifelong fan Harry Mulligan reports back by Louder Than War.

The  Van T’s warmed-up the ABC in Glasgow for the JAMC on Saturday the 23rd of September, 2017, with a resoundingly good set.  With three local lassies across the front, and a male drummer, one might be tempted to compare them to other female fronted bands like Throwing Muses, The Bangles and The Go Go’s, but they are much more than that, even if it is those bands that they remind me of.  More than that, they are a product of Glasgow – The Citadel of Rock, and being regulars on Scottish Festival stages, we have grown fond of them up here.   They have  great harmonies like those aforementioned acts,  and they did a superb job of  warming up this great wee venue for a homecoming show from the cult status East Kilbride brothers, The Jesus and Mary Chain.

JAMC hit the stage and an opened proceedings with Amputation from the most recent Damage & Joy album produced by Youth, and released this year to critical acclaim. It’s easy to hear how much of an influence JAMC have been on bands like Dandy Warhols from material they hadn’t even released yet; – and Amputation is a perfect example of this. Get yer head around that! The enormity of this song is staggering, and the crowd loved it, simply placing it atop the set list was in itself an affirmation and acknowledgement of how big the band themselves regard it.

After drawing attention to the huge allure of all things Scottish in ‘Happy When Its Rains’, (Darklands, ’87), the band were joined onstage by William Reid’s partner Bernadette Denning on backing vocals for Always Sad – a  single as well as a love song, also from Damage & Joy.  Seeing this live for the first time, an understanding is quickly gained as to why this album is critically acclaimed.  Is this the Jesus and Mary Chain’s Magnum Opus? Everyone who has ever been a fan of them has to consider that to date, this is their Crowning Glory -even more so than Psychocandy.

The rest of the set showcased the Mary Chain’s back catalogue, with songs from Psychocandy 1985, (Some Candy Talking), Darklands 1989 (Darklands, Cherry Came Too, ), Automatic 1992, (Halfway To Crazy) Honey’s Dead 1992 (Reverance).

There are two things here to note:  One is the fact that the Jesus and Mary Chain have become the best outfit to put a soundtrack to a dystopian, existentially bleak backdrop, while simultaneously  evoking a gladness and gratitude in the listener or audience member who has come to associate themselves with being a denizen of such a place.  The second is that the current line-up of William and Jim Reid (guitar & lead vox), Mark Crozer (bass), Scott Von Ryper (guitar), and Brian Young (drums) have settled in so much as a unit that they are doing the Business in the studio and onstage, surpassing every expectation, and in danger of putting to bed all past shitty anecdotes of bedlam and chaos.  Is this actually really possible?  If their show in Glasgow is anything to go by, the answer is an enormous YES!

What’s evident from the show in Glasgow is this:  the band have navigated their way through the pre-production and production paces of making Damage & Joy with Producer YOUTH.  They have played sixty something shows in promotion of it. They are preparing to go to do the same in North America, and as I said to Jim Reid after Glasgow’s show, they looked ‘Muscled’.  From all the shows that I have ever seen them do, and that’s every one in Scotland in the past four years, this show was the best one to date. This was The Essential Jesus and Mary Chain; visually, lyrically, aesthetically – increasing in intensity as it went on, reaching such a zenith by the time they hit the last song in the Set – Reverence, that it was exhilarating and breath taking.

For their first encore, Madeline Cassidy joined them for Just Like Honey followed by Cracking Up, In a Hole and The War on Peace. Everyone knew they were experiencing something special here in Glasgow, and a look around revealed that everyone had something of a Cheshire grin wiped across their face.

After another show of departing for the night, they returned and Jim said: ‘We’re back here again!  Thank you so much for coming out!’,  They then dished up Sidewalking and I Hate Rock And Roll, in the finest JAMC fashion, and departed leaving the audience to the signature throb of William Reid’s guitar feeding back into the two mic’ed up Orange heads and cabinets.

Speaking afterwards to Scott Von Ryper the Mary Chain’s guitarist, he said to me:

‘Harry, I was standing on stage tonight and I thought; ‘I have the best job in the world, I play guitar for the Jesus and Mary Chain’!