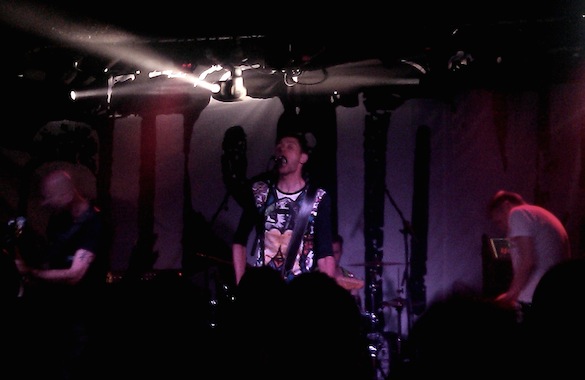 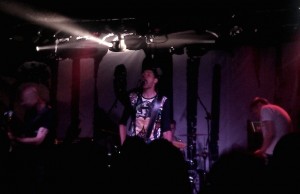 Jesus Jones return to tour their Doubt album – Christopher Lloyd enjoys the show but his mum would disapprove.

Rock and roll is the music of the devil apparently. But what about pop? The cliché is that save for a bluesman or two, it’s the debauched seedy rock world that sells out to the devil. Do pop bands sell their soul? My mother thought so.

In 1991 my father had not long recovered from cancer and the stress of it all took its toll. My hard working mother found religion and for some reason figured that Jesus Jones were satanic, based on the album Doubt.

She insisted that as the slightly devilish cartoon face on the sleeve is shaped like a pentangle, thus it was the work of Satanists (rather than graphic designers). The inside sleeve offered yet more proof – “look son – the band are in pentangle formation”. There were the warnings of stereo breaking strange noises within the sleeve notes that she took as code for “backwards messages masked within the noise”. Cast iron proof that this album had possessed her house and her 15 year-old son. A vicar was called, my bedroom exorcised. Seriously.

Clearly, Doubt was an important album to me. Thankfully, after the stress settled. Sanity got restored in our household and all worked out fine for my family.

Things didn’t turn out too shabby for Jesus Jones either.

Doubt was both the bands biggest commercial album, yet also their strangest album. Moody electronic dirges sit alongside electro punk stompers. The album also houses a handful of bona fide pop hits that saw the band frequent the pages of Smash Hits and the NME respectively. In the early nineties, Jesus Jones were pioneering the use computers and samplers to create intelligent indie pop music, and history never really paid them their dues for doing so. Doubt was the album where it all came together perfectly.

2014 sees the band touring Doubt in its entirety. As I wasn’t allowed to see them tour it in 1991, I’m now thankful for nostalgic tours.

The band looked comfortable on this opening night set. The tracks sound slightly more anarchic than the finely tuned counterparts of old, yet this was no money for old rope cash in show. There was a genuine love for the material. Of course, the audience know every word. You know how these things work. That’s not to say that there weren’t surprises thrown in along the way, such as Japanese bonus track Are You Satisfied or a reworking of the never played Stripped.

The new version was slowed down to a dub bass heavy electro torch song, unlike the bombast and wall of noise original (which I personally adore), and served as a fine indicator of how Jesus Jones would sound if they were making music 22 years down the line, an idea that they perhaps should take seriously. I just wouldn’t advise them to sell their souls to Satan to do so.