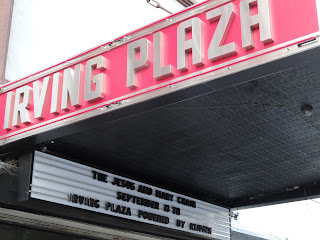 The Jesus & Mary Chain played two consecutive nights at Irving Plaza in New York City, and I was there to witness them both.

We all know the history: chaotic amphetamine-fueled fifteen minute sets culminating in angry audience stage invasions and a hail of broken bottles and glass, drunken onstage fisticuffs between band members playing with their backs to the crowd…
It is fair to say that The Mary Chain's reputation for erratic and often shambolic live shows precedes them, but let it not be the sole judging factor for this thrilling band, who, beyond the legendary mayhem and uproar, have always been sensitive songwriters with a singularly uncompromising vision.

For both nights, the first support slot was provided by Brooklyn's well-received and fast moving The Vandelles, a reverb-laden, dissonant and noisy affair naturally well suited to sharing a bill with The Jesus & Mary Chain. Drummer Suzanne “Honey” Pagliorola proved to be the most compelling member of the group with her aggressively syncopated drum bashing. I like to see drummers grit their teeth with the rapid force of the blows they're delivering, and I could see her anticipating each beat with a sort of reckless glee as her hair flew around her face. On Thursday they finished with a somewhat unconvincing manhandling of stage gear before heading off, while on Friday they seemed abruptly whisked off the stage (whether because of time restraints or otherwise, I'm not entirely sure).

Second act was The Psychic Paramount, who refreshingly appeared to not give a shit. There would be no token rock star gestures of trashing equipment or enthusiastic shout-outs to the city, no posing at the edge of the stage for a protracted squall of guitar soloing…These boys were like the horsemen of the apocalypse, crafting a painfully loud sonic wall of undulating grooves which earplugs did very little to soften or subdue. Add to that a constantly flowing miasma of noxious vapors courtesy of a dry ice machine working overtime, and the murky atmosphere of impenetrable doom was pretty near complete. Through the dense, swirling fog, their dark, concentrated figures lurked like spectres in the gloom, the barrage of noise broken only by a transitional chirping of crickets between songs (and even that was still an aching boom in my ears).

Let me begin my Jesus & Mary Chain report by confronting people's misunderstanding of their stage persona. To many uninitiated audiences, they appear stoic and disinterested – Jim's audience interaction is curt and laconic, often a brief thanks with a short shrug of his shoulders before he walks towards his whisky cup where it rests on the drum stage riser – but it's long been common knowledge that The Mary Chain have always felt timid and uncomfortable on stage, an issue they have disguised well with their tumultuous noise assaults and well publicised drunken brawls.

I sometimes feel that today's audience has too much of a sense of entitlement, or that they want to make the night all about them, and to be honest, bands constantly seeking approval and self-consciously fawning all over the crowd to provoke a reaction just bore me.
To me, Jim Reid has always been a passionate authority on music with a fantastically dry and quick witted sense of humour. He demonstrates this early on Thursday night, addressing all the insistent cries of “I LOVE YOU, JIM!” simply with “I love me, too.”

Thursday was the most professional I have ever seen them, they were both well organised and well behaved, with no incidents or false starts to speak of. The brothers Reid – along with one time Bobby Gillespie replacement John Moore on additional guitar, bassist Phil King, and drummer Brian Young – competently ran through 17 ageless JAMC tunes. William's feedback bursts seemed controlled and well-timed, and the spectacular lighting saturated the stage in vivid greens, blues and reds.

If there is any small complaint to make, it is that the set can seem a bit one-paced at times, consisting mainly of drum machine-era rockers from Automatic and Honey's Dead, but it is hard to quibble with classics like the explosively anthemic “Head On”, the bad-ass, sneering “Reverence”, with it's groaning refrain of “I Wanna die just like Jesus Christ/I wanna die on a bed of spikes”, or the lunging, cock-sure swagger of “Blues From a Gun”. 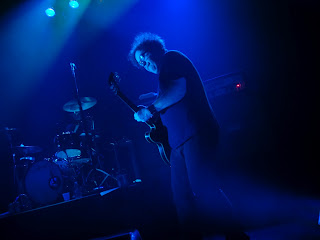 There were also more cuts from Psychocandy than I had heard live previously (all 3 encore songs) which made attending both nights doubly worth it, although Darklands was still underrepresented, with only “Happy When It Rains” making an appearance. Mary Blount from NYC all-girl rock trio Baby Shakes joined the band for “Just Like Honey” backing vocals on each night.

Friday was more memorable and had better sound despite the performance being sloppier overall. The band arrived onstage when “Sultans of Swing” was playing over the PA system, and Jim didn't want there to be any confusion, vehemently stating that they had NOT picked “Sultans of Swing” , that it was just bad timing, and that the DJ should be killed. 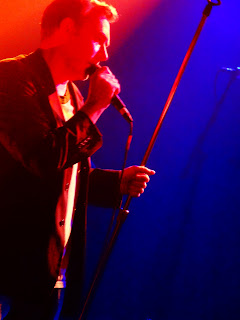 Fortunately John Moore's supplementary guitar duties took the attention away from some of William's more inebriated embellishments. Many times Jim was put on the spot because of William's poor timing and frequent tune up delays, during which he apologised for being “socially retarded” as he doesn't do audience banter or chat between songs.

There was the familiar tension and antagonism between the brothers, with Jim looking like he was miming poking William in the eyes through his glasses after they had a post fuck-up private huddle. William also had an uncharacteristic 'rock god' moment when he came to the front of the stage in front of me to let off all kinds of errant squealing noises from his guitar, and it seemed like he was doing pretty much whatever he wanted, regardless of some of the more cutting looks he was getting from Jim. Still, the mood seemed light and by all accounts, William was a hilarious character backstage as well, becoming a harmless but amusing 'annoying Romeo' in his various attempts to pick up girls.

So The Jesus & Mary Chain remain an unpredictable force close to my heart, creating a mostly beautiful din which sets them miles apart from their contemporary copyists too scared to ruffle any feathers or do things their own way. Anyone expecting perfection and smooth professionalism should stay at home, but it'll be their loss.

SETLIST:
Snakedriver
Head On
Far Gone and Out
Between Planets
Blues From a Gun
Teenage Lust
Sidewalking
Cracking Up
All Things Must Pass
Some Candy Talking
Happy When It Rains
Half Way To Crazy
Just Like Honey
Reverence
—————————
ENCORE:
Hardest Walk
Taste of City
Never Understand