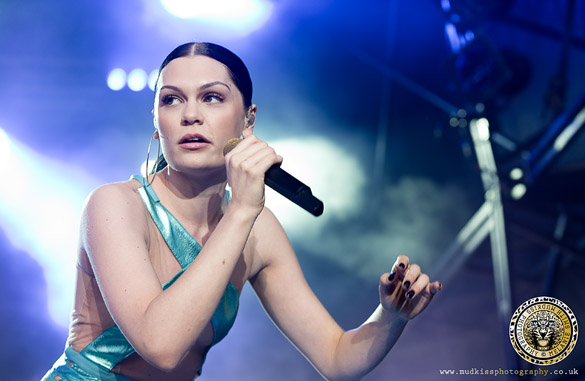 Melanie Smith goes deep into the forest and discovers the chart topping pop diva Jessie J performing to a mass of adoring fans.

And here we are again at another sold out Forest Live concert deep in the heart of Cheshire. It’s a totally different vibe from last nights Paul Weller headlined, soul and folk event (see our review here). Instead it’s a night of unashamedly mainstream pop, and the area is packed full of families, the sun is out (plus the bugs) and it’s a glorious atmosphere. Sumptuous picnics are being laid out with mouth-watering fruity drinks, and of course the odd beer or two. Also totally opposite to last night, when everyone had waterproof ponchos and wellies,  now people are reaching for sunglasses, face make up, shorts and skimpy outfits. They are here to see Essex born Jessica Ellen Cornish, better known as Jessie J, who is not only the first British female singer to have six top 10 singles taken from a single album, but is coach and mentor for TV show The Voice. 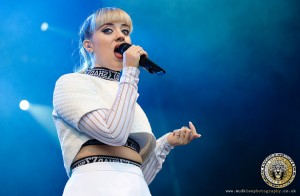 To kick off the night we have the bright and breezy artist from Northern Ireland Leah McFall (the runner up in the 2nd TV series of The Voice) (see photo, right, © Melanie Smith). She emerged for a very short bouncy set, which grabbed peoples attention and warmed them up for the main act.

The hard hitting electro pop tune ‘Sexy Lady’ plays out as Jessie strides elegantly onto the stage after a short musical intro from her band, looking tall and lean, in a turquoise leather catsuit, (possibly inspired by the fashion designer Pam Hogg). She looks stunningly beautiful and androgynous in the flesh, all pale perfection. A rapturous reception from the many hundreds of young people on the front row which is packed with teens, holding placards with messages; lots of young women who aspire to be like Jessie. She knows how to use her body, and her voice (pardon the pun) as well as how to connect on a personal emotional level with her audience. During our three song photo session she introduces an old friend onto the stage, a guy called Bluey Robinson. They perform a blazing pop duet together called ‘Calling All Heart’s. My time in the pit is over way too soon – that was a thrilling ride. 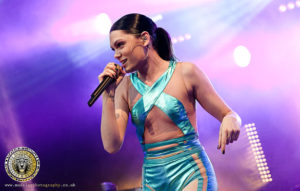 One thing about JJ is that she likes to communicate with her fans, and talk between songs, and fifteen minutes or so into the set she reads out a touching letter from a fifteen year fan called Kaytie Doughty who says she gets her inspiration from Jessie, by reading her tweets. When she starts into the next song her mic let off the loudest noise you could imagine, unable to be fixed she gestured back in 5, and after what seemed like a long wait she returns saying:

“That’s never happened me before, it nearly blew my ear drums out “.

She then proceeded with a new song called ‘Sweet Talker’ taken from her new album. She talks again for sometime about nerves and about how anything can go wrong and about needing to pick yourself up and start over again …

It seems that most people can relate as they scream and shout out. She followed this with a slower number, reaching all the high notes.

Next song is ‘Wild’, a radio favourite, with its RnB dance beats, and hip hop, the feet found themselves tapping just a tad.

The whole sound in the forest is incredible, it vibrates and resonates at a perfect pitch. Jessie is chatting again, and she’s been bitten already by bugs, her favourite thing about today is that there are so many families here. She says that growing up she used to share so much with her family, in particular music like D train and Luther vandross … and a day out in the forest! … spoken in her best cockney accent! The next song I recognised too – ‘Lazerlight’, it’s a lively tune and everyone jumps around at the appropriate moments.

And this is where I made my exit … so another forest concert ended. Boyzone on Sunday, but that’s me signing out for the weekend. Jessie J isn’t particularly an artist I would have bought a ticket to see, but you can’t take away the fact that she is one of the best British pop artists. One thing that shines throughout is her love of performing, and so the last word goes to Jessie J:

“I just love to sing and perform!”

The Forestry concert people can be found on their website: forestry.gov.uk/music.

Words and photos all © Melanie Smith. More writing and photos by Melanie can be found at her Louder Than War archive.