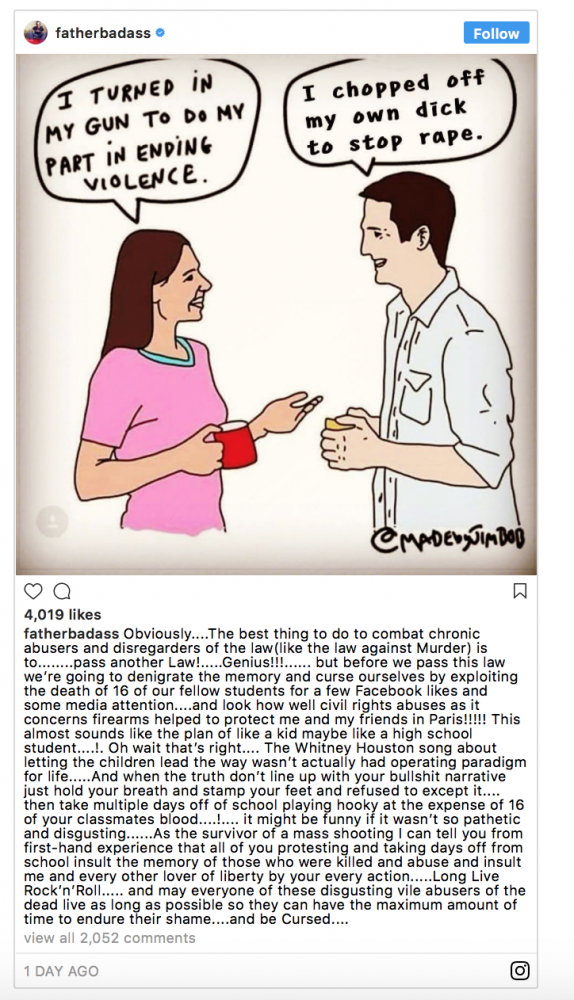 Eagles of Death Metal singer criticises student protestors as “disgusting vile abusers of the dead,” and also shares a doctored photo of Emma González that shows, the now iconic, young student tearing the American constitution in two when she was actually ripping apart a gun-range target. In the new America, this kind of digital bullying is the norm and the Parkland survivors are at the receiving end of death threats and bullying.

There was a time, a long time ago, when rock music at least tried to pay lip service with the concerns of youth but now in 21st-century Trump-ton it’s increasingly like an out of touch, old man and it is mainly middle-aged men – increasingly out of sync with the youth.

This weekend millions of students marched on the streets with the not too unreasonable campaign of not getting shot to death sat in a classroom by some deranged person with access to high calibre assault weapons.

A peaceful march all across the USA you would think that this was a fairly reasonable cause and whilst the likes of Paul McCartney actually marched anonymously in the huge crowds the sadly and probably more genuine voice of modern rock music could be heard from the likes of Jesse Hughes – the frontman of the Eagles Of Death Metal – a band who admittedly were caught in the crossfire of the tragic events at the Bataclan in Paris a couple of years ago.

After that shooting, Hughes came out with some disagreeable opinions on the right to bear arms and questioned whether the strict gun control laws in France were a factor in so many people getting shot at that fateful gig. We were left wondering that in a dark room full of panicking audience members whether random members of the audience who were sober and had remembered to bring their guns would have been able to get a clear shot in and even know who to shoot at and not add to the depressing carnage.

Hughes who was already very Republican/Trump in his views before then later retracted those remarks but has added his voice to the gun control debate that is splitting America in two. Rock music feels like it’s on the wrong side of history with Donald Trump in power in the USA blundering around like an old rock star on his last half full stadium tour it’s becoming the soundtrack to the out of touch. The modern world of #metoo, students demanding gun control and a whole plethora of new generation thinking that has seen the under 25’s question the selfish baby boomer world, the Eagles Of Death Metal man sounds very much like parent generation left marooned by the changing times in a series of messages posted on his Instagram – three of which have since been removed.

One of which is the doctored image of Gonzalez tearing the American constitution in two when she was actually ripping apart a gun-range target which comes with the Instagram message from Jesse Hughes “Behold……the Awful Face Of Treason…..survivor of Nothing….Lover of Treason…..enjoy your little moment…..it’s about to End…… #stupidity #hatersofliberty #loversofsatan #borntolose #2ndamendment”’

Obviously….The best thing to do to combat chronic abusers and disregarders of the law(like the law against Murder) is to……..pass another Law!…..Genius!!!…… but before we pass this law we’re going to denigrate the memory and curse ourselves by exploiting the death of 16 of our fellow students for a few Facebook likes and some media attention….and look how well civil rights abuses as it concerns firearms helped to protect me and my friends in Paris!!!!! This almost sounds like the plan of like a kid maybe like a high school student….!. Oh wait that’s right…. The Whitney Houston song about letting the children lead the way wasn’t actually had operating paradigm for life…..And when the truth don’t line up with your bullshit narrative just hold your breath and stamp your feet and refused to except it…. then take multiple days off of school playing hooky at the expense of 16 of your classmates blood….!…. it might be funny if it wasn’t so pathetic and disgusting……As the survivor of a mass shooting I can tell you from first-hand experience that all of you protesting and taking days off from school insult the memory of those who were killed and abuse and insult me and every other lover of liberty by your every action…..Long Live Rock’n’Roll….. and may everyone of these disgusting vile abusers of the dead live as long as possible so they can have the maximum amount of time to endure their shame….and be Cursed…. 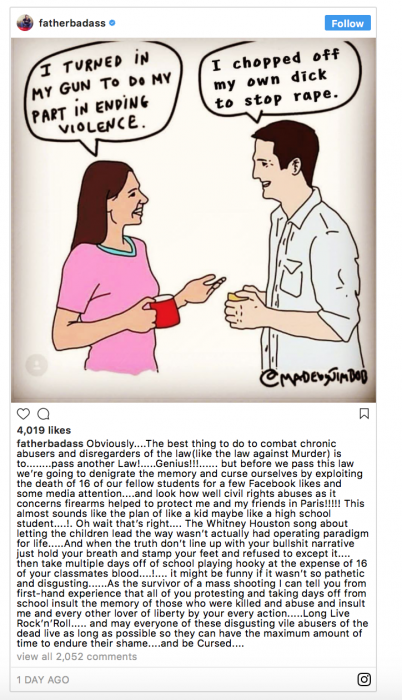 A third image shared by Hughes opens with a frame of a pill bottle labeled, “Pills That Are Hard to Swallow.” In the second frame, a hand is holding three pills, each of which contains a different caption: “Our guns aren’t going anywhere”; “There are only 2 genders”; and “Donald Trump will be your president for 7 ore years.” In the accompanying Instagram caption, Hughes warned “moronic dingdong headed losers” that he would report any threats made against him to the FBI.

And in a fourth posting, Hughes shared a pro-Second Amendment patch. “I can tell you right now that the actions of these misguided youth and evil communists is making me feel terrified… with every broadcast of a willing and complicit press I feel the wall of security that the Constitution provides being taken down bit by bit…..,” he wrote.