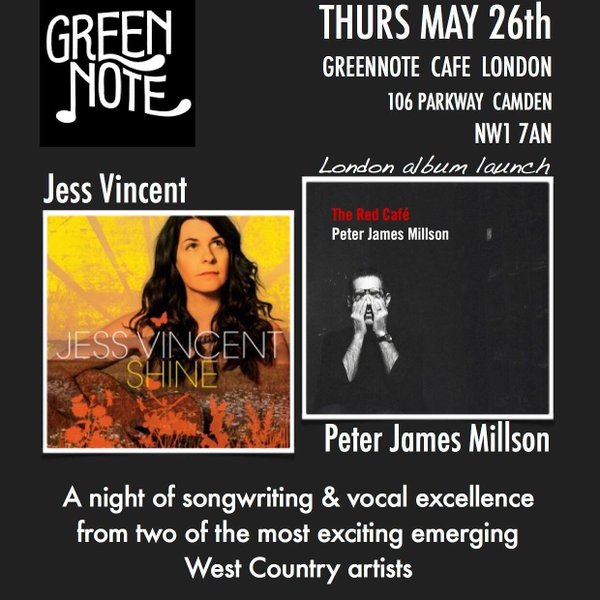 People are always complaining that the music scene isn’t what it used to be, that you don’t hear great songs anymore. If you want to witness great musicians, the only thing you have to do is come up at The Green Note in Camden on any given night and you’ll most certainly hear fantastic music. Tonight’s double bill was no exception to the rule with two singer songwriters who have reached the three album mark (although PJ Millson’s third offering is to be released in 2017). This night originally scheduled to be a Jess Vincent show was “hijacked” (his words not mine) by PJ to launch his second solo album “The Red Cafe”. I won’t lie, I hadn’t heard any of their music prior to attending the show but both artists true to the folk tradition gave plenty of feedback on the origin of their songs and most importantly for the profane reviewer : the title of the songs prior to performing them. We were lucky to have a special guest for the show with legendary pub-rock guitarist Martin Belmont (Ducks Deluxe, Graham Parker and The Rumour, Nick Lowe) who brought his skills to several of Jess’s songs. Possessing the most endearing personality ever, Jess played eight songs mixing them with stories on how she wrote them. She’s a great vocalist which coupled to her storytelling and songwriting abilities provide a very entertaining performance. The title track from her recently released “Shine” is pure Joni Mitchell ear candy, a song that will stay in your head for days. Quite a few songs from her second album “Seesaw Dreams” were aired including her excellent tribute to the sixteenth century female pirate Annie Bonnie and the sing-along “Go Fetch My Heart”.

After a short break PJ Millson made his way to the small wooden stage of The Green Note. A persistent crackle coming from his Takamine guitar forced him to not move too much during the performance. As intense as Jess was bubbly, he nevertheless displayed a dry sense of humour that won the audience over. This evening was the launch of “The Red Cafe”, an album that he recorded himself with the help of some musicians friends at his house in Bridport. Opening with a new song entitled “Save Me From The Worst Of Me” which PJ followed by “I Did Things I Shouldn’t Have Done”. The excellent “None of This” proves that Red Cafe is far from a stop gap release till his third LP (produced by Boo Hewerdine) gets released next year. Red Cafe’s instrumentation is quite luxurious for an album recorded at home (even if home recording technology has made a tremendous leap in the last decade) but hearing the stripped down versions with just PJ and his guitar brought something else out of the songs. Jess and Martin joined PJ for one last song, an unrehearsed (and excellent) version of Nancy Griffith’s “Love at the Five and Dime”.