Home Music Jess Gillam: From busking to the Proms – interview 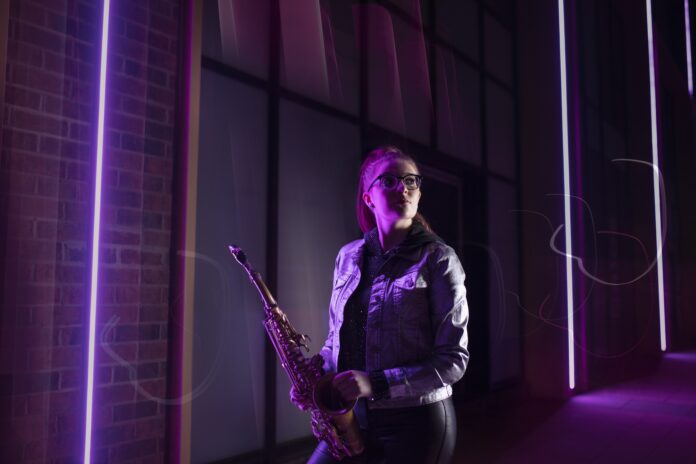 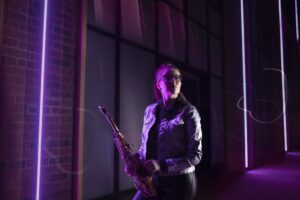 There are not many musicians who start their career in a carnival street band and end up playing at the legendary Last Night of the Proms but that’s exactly what saxophonist Jess Gillam did.

Jess is on a mission to popularise the sax, which has fallen out favour in pop circles in recent years, and her second album Time is a clever mix of minimalist giants like Philip Glass and the pop acts she listens to.

The new album was partly recorded in Abbey Road studios where The Beatles worked their magic, but when Jess first picked up a sax in the community centre in Barrow in Furness where her street band practised she never dreamed where it would take her.

“My dad was teaching percussion there and I just had to go to work with him every week after school” recalls Jess of her introduction to the sax. “I’d tried everything there – stilts, dance, percussion – and finally picked up a sax, and fell in love with it.

“I had my first tuition there, and we played a bit of pop and some Brazilian samba in different carnivals around the country. Everything was just about joy and being part of a collective.”

Gillam went onto to become the first saxophonist to make the final of the BBC Young Musician of the Year, but then dropped out of her undergraduate course at the prestigious Royal Northern College of Music to concentrate on her recording career.

That proved to be a very wise move as her debut Rise went to number one in the Classical Charts. This new album is a carefully curated collection of songs from Michael Nyman to Thom Yorke she was keen to reinterpret.

“I think I wanted it to be as authentic as possible to reflect the kind of music I love, and that I listen to, which I think works well on the saxophone. The lyrical side to the sax and the vocal quality to the sound suits a lot of that music, so trying to emulate Thom Yorke or Bjork’s voice on the saxophone was a great challenge.

“This is the first time I’ve recorded with my new ensemble, I think being with a collective of musicians who I’m close to both as friends, and musically, who have a similar passion for music can push things in a new direction to try things out in the studio.”

In a real statement of intent, Gillam commissioned two original pieces, and Australian minimalist composer Luke Howard contributed Dappled Light as the album’s first single, which feels like a dreamy meander through a person’s day.

“I’d heard some of his film music, for me it was really evocative, transcendent and beautiful,” notes Gillam. “I’d not heard any of the music he wrote for saxophone, and I was interested to see how he wrote for the instrument, and whether he would write for it similar to a voice, or piano. It had a bit of the neo-minimalist thread to some of the music and so I thought he would be a great fit for the Nyman and the Glass.”

“The piece he wrote ended up being quite mediative. and he wrote wonderfully for the saxophone. It tries to capture the constant cycles that are happening everywhere, so you get lots of these repeated motifs in minimalism and patterns that change ever so slightly and go round – that’s how we live life with these constant cycles going round all the time.”

In almost direct contrast Gillam also asked Goldfrapp’s Will Gregory to create a more edgy piece, Orbit, that could sit just as easily with his own band’s output.

“I’d been a fan of Goldfrapp for some time, I listen to them a lot and loved how he and Alison Goldfrapp combined the electronic and acoustic sounds to create this kind of kaleidoscope. You’re not quite sure when you’re listening to an acoustic instrument or something electronic. The energy and drive they have is brilliant, I also knew he was a saxophone player, and had played with some of my favourite artists like Peter Gabriel.”

“He wanted to write something for alto, for me there’s more grit and drive in some of the alto sounds. He just writes with such a great groove and feel.”

As well as a smart reworking of James Blake’s pop anthem Retrograde, the South Cumbrian also decided to take on one of Bjork’s most sonically challenging numbers using the lyricism of the sax to give Venus As A Boy a more soulful feel.

“With Bjork it was some of her musical ideology I had really taken to, so she talks a lot about creating a microcosmos within music and a piece. You can go inside, exist within it and look around rather than being an active part of the narrative as the listener. That was really what I was trying to create on the whole album, so I wanted some of her music on there to respect that ideology.”

“Venus As A Boy has so many different components and layers to it, and great rhythm. It is just one of the best ever songs.”

There is not an artist who has walked through the doors of Abbey Road who hasn’t felt the history in the walls of the world’s most famous studio where the Fab Four created their masterpieces. Gillam was no exception as she used that legacy to raise her game in Studio 2.

“To be in Abbey Road, I think the word honour can be overused, but it was a genuine honour to be in a studio with such a rich history. As soon as you walk into that building you are aware of how special an opportunity it is, and all my senses became heightened, so I wanted to be as musical as possible.”

And if that wasn’t enough Gillam was invited to take her sax to London to play at the Last Night of the Proms, so performing at classical music’s biggest night of the year must have been something of an out of body experience?

“It was completely surreal as I think I was 20 when I did it, and it was an honour I never expected to have that so early in my career, never mind have it at all. It was a real privilege to play at such an event as I love playing in the Royal Albert Hall. It is such an amazing venue with such an incredible legacy, but I enjoyed it so much.”

Time is out now at Decca Records.