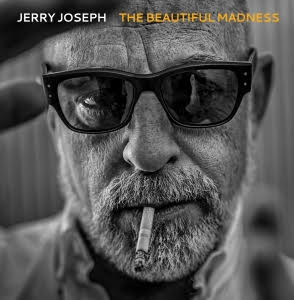 Jerry Joseph is a venerated songwriter Stateside, and yet pretty much unknown here, but that is going to change with this album.

You’ve probably never heard of veteran rocker Jerry Joseph, but across the Atlantic he’s venerated by Drive-By Truckers’ Patterson Hood and his former band mate Jason Isbell as one of best songwriters and live perfomers they’ve ever seen…so who are we to disagree with such good judges?

In fairness to the Drive-By Truckers they have put their money where their mouths are by backing Joseph as the Stiff Boys on what is his first European release. Whilst his bandmates work their magic on Joseph’s strong songs Patterson Hood doubles up as producer at Matt Paton’s Dial Back Studio in Mississippi.

And they also pulled off a coup as Isbell teams up with his former compadres for the first time since he left the band in 2007 contributing slide guitar to timely ballad Dead Confederate.

This is Joseph’s state of the union address, and Days of Heaven has a touch of the Mellencamp about it as he recalls how he wrote it on his brother’s porch with a 45 by his side in case the local drug dealers came a calling.

Bone Towers is a mid-tempo brutally honest reflection on a broken relationship before this record lifts off with the epic, visceral Sugar Smacks. Imagine a James Ellroy or Don Winslow novel set to music, and you get near how powerful this song is as Joseph lets rip at our fucked up world, which he has seen for himself as he as toured some of the world’s trouble spot with his charity foundation NOMAD giving guitars away to budding musicians in some of the worst hellholes. It’s not all talk with Jerry.

The cleverest song is Dead Confederate as Joseph’s mournful Southern blues, lifted by Isbell’s sympathetic slide guitar, looks at the ongoing battle over racist monuments from the unexpected perspective of the statue. It sounds a bit hokey, but it is actually a brilliant offbeat reflection on why monuments to men who thought ‘buying and selling humans was good work if you could get it’ need to be pulled down. The decades long ‘rebel pride’ represented by these bits of metal dissipates as the statue is hauled off to the scrap yard.

Joseph offers a heartfelt tribute to the Thin White Duke with a song he wrote when he first saw him as a 13 year old fan saying that Bowie had acted as a satellite to a different world for a generation of musicians.

You can see why Woody Harrelson is such a big fan as this well crafted and angry record is going to break Jerry Joseph over here, so get down early to next year’s Drive-By Trucker shows in the UK where he is the support.