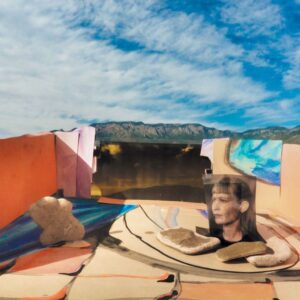 Jenny Hval is an incredibly special artist and one whose work has continued to fascinate me with each new release. Classic Objects is the Norwegian maverick’s first LP for the iconic 4AD label and perhaps the project that will bring this much-loved cult figure to a wider audience. A singer-songwriter, an author and a producer; Hval is an artist through and through. The music, the artwork, the lyrics and the albums underlying philosophy are all given an admirable level of attention. Each aspect feels integral to the overall impact, making it an ideal candidate for some deep, uninterrupted listening.

While the album began with a desire to explore herself and tell “simple stories”, it blossomed into something far more nuanced. Hval has explored many themes throughout her discography and always approached her art from unexpected angles. Her lyrics have delved into love, sex, death, capitalism, femininity and religion in a way I simply haven’t heard anywhere else. Throw in the occasional female vampire or conceptual romance and you’re onto a winner. The lyrics on this new LP were written in collaboration with Annie Bielski. Rest assured, you won’t find well-worn cliches, empty platitudes and cookie-cutter lyrics here.

Year Of Love combines flourishes of percussion, upbeat keys, guitars and slinky bass lines to create something that exudes a welcoming brightness and positivity. A subversive pop song that was written in response to a proposal that took place at one of Hval’s shows. The lyrics remain as wonderfully unconventional as I’ve come to expect. “In the year of love,” Hval swoons as she surveys the troubling scene, “I signed a deal with patriarchy”. Just as she did on 2019’s The Practice Of Love, Hval brings a fresh perspective to very familiar themes. It’s one of the many reasons why her records deserve your undivided attention.

Autobiographical snippets appear throughout the songs, from Hval’s first studio space in the title track to her own birth in American Coffee. The latter also cites an introduction from the book, A Thousand Plateaus: Capitalism and Schizophrenia. I don’t think you could sum up any of the songs as addressing one thing. Traditional song structures and narratives are playfully stretched and reimagined. The lyrics often feel like they’re taking a deep dive into her subconscious, adhering only to a dreamlike logic. Hval’s Zenlike delivery ensures the album retains a beautiful sense of serenity. The blue skies present on the cover of the LP provide the ideal image and colour palette for the calm, considered compositions held within.

Cemetery Of Splendour creaks with field recordings as the lyrics guide us through empty bars and halls before drifting steadily towards the afterlife. The music is ghostly and ethereal yet when it erupts it provides one of the album’s most euphoric, spine-tingling moments. Its 7-minute duration passes in the blink of an eye. Year Of Sky continues to explore the spaces between everyday life and the almost indefinable feelings, memories and experiences that make us who we are. Hand drums, ambient keyboards and the subtlest of tonal shifts keep the mood suitably dreamy.

The sprawling Jupiter provides 8 minutes of celestial bliss infused with mystery. Hval swoons as the song blooms and her voice soars into the clouds, “Just so lonely”. Freedom comes next; a sun-dappled and serene 2-minutes. “I want to live in a democracy. Somewhere where art is free” she sings over the heavenly harps and ambient tones. Finally, The Revolution Will Not Be Owned floats in on beautiful, jazzy instrumentation. “This song is regulated by copyright regulations and dreaming doesn’t have copyright,” she tells us before invoking a little Gil Scott-Heron, “I guess you could say: The revolution will not be owned”. Your dreams, dear reader, are not for sale.

Classic Objects is a somewhat therapeutic, avant-pop record that works on both an emotional and cerebral level. The songs will, if you give them time, seep into your mind and take up residence in your subconscious. The music is smooth and inviting and the album feels like it exists inside some kind of hallucinatory daydream. Like all interesting art, I’ve found myself thinking about this album long after the final note.