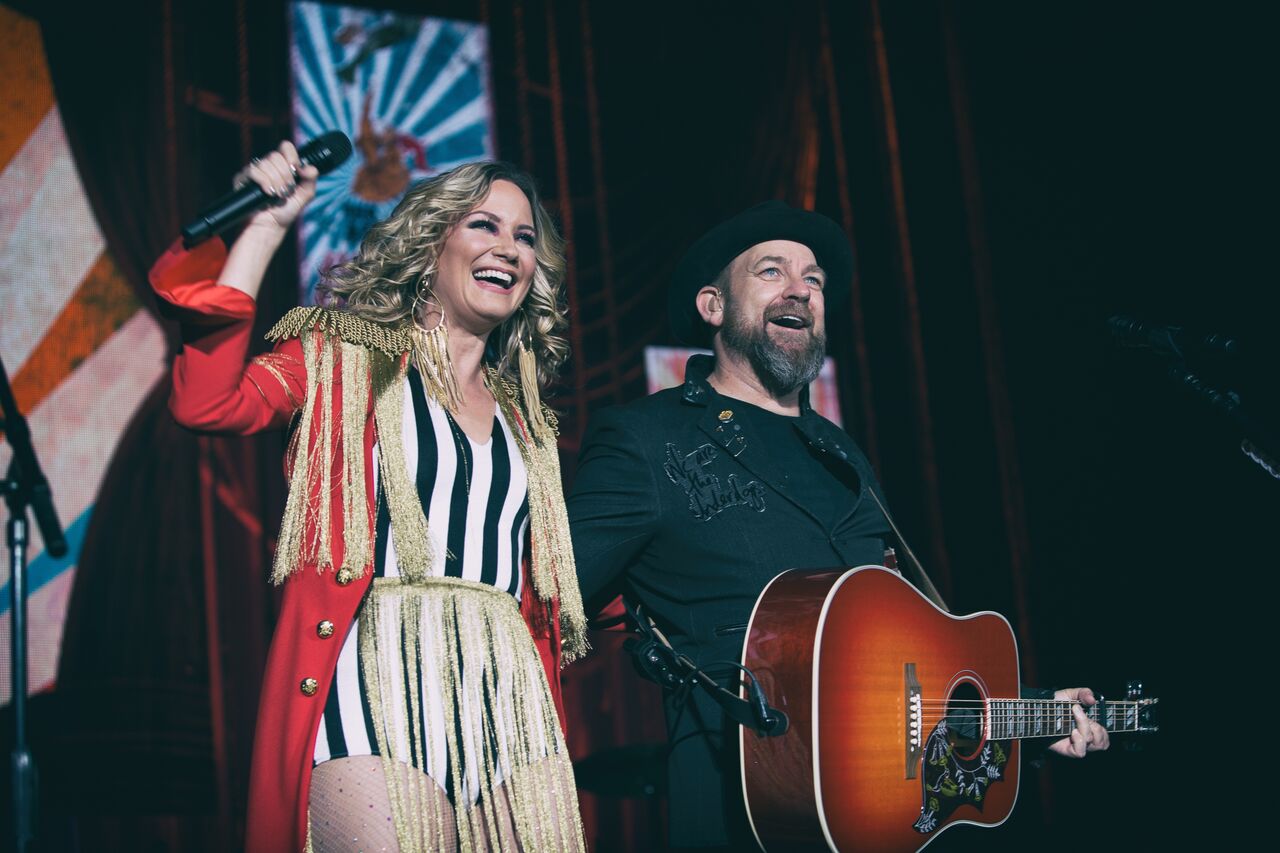 The Grammy winning, global super Country Western duo, Sugarland have courageously added  the Patty Griffin LBGTQ tribute song, “Tony” to their set while touring the nation. Although a rarity to be politically outspoken on liberal topics in the country community,  singer Jennifer Nettles, never straying from her beliefs and convictions, bravely took her artistry to another level of compassion and benevolence in performing this powerful and heart wrenching song, about a gay teen committing suicide. 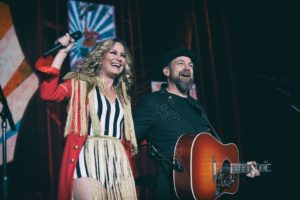 Jennifer feels very passionate about bringing awareness to LGBTQ teen suicides, and also has hopes of ultimately bridging the gap between the usually conservative country community and the Gay community.

I spoke with Jennifer regarding her feelings on that specific issue, her brand new album, “Bigger”, the reaction “Tony” has unveiled, and of course Sugarland’s on going US tour. I found her to have a special, captivating and titanic energy, and a magical empathy that you do t often find…..

Louder Than War: The song “Tony” made me cry. It’s a very powerful song.

Yeah, it is very powerful, it is very confronting, it is so many wonderful things that art is intended to be.

I think that you carry that message perfectly and very passionately. I would love to know your inspiration for performing that song during your tour.

It actually came about quite organically, as the best artistic moments do. We were having a conversation in general about Patty Griffin and that song, specifically and how we loved it. We thought “Well let’s perform it”, and then we realized just how powerful the message is and could be  within the LGBTQ community. Then we looked and thought, ” Oh My God” , it’s pride. Then a small spark became a glowing ember, and we thought, let’s get some messaging to go behind on our Jumbotron  to support …..obviously the song is very confronting and sadly about gay teen suicide, but let’s get the messaging to raise awareness about this issue. So we reached out to my friend Jane Friedberg who works at the HRC. I reached out to her and said, “we’d like some help with this messaging. We’re going to perform this song. We want to raise awareness and we definitely want the information we are sharing to be representative of something that the LGBTQ community would want to be shared and within the temperature of something that feels in line with the LGBTQ community now. So they sent over some wonderful messaging and options to put behind on the Jumbotron, which were not only the statistics of gay suicide but they went even further, which I think is so great. They gave us questions to ask ones self about how you can help, or where there are places were a child might be hearing either supportive or damaging information. What do they hear at home? What do they hear at church? What do they hear at school? How can we make those environments more loving and more supportive? Then obviously the song itself is so confronting in terms of what an impact words have. I can sing the word, but I can’t even say the word. In the chorus it is just so hot, it’s such a hot, painful word. All of that together really has created such a beautiful moment within the show.

Obviously the song has its own extremely powerful message, but you personally seem very passionate ….I mean you’re a passionate singer anyway…but when you sing that song it’s seems very emotional. Do you have your own message or view point on that issue that you’d like to also talk about, aside from or  because of the song?

You know what, I’m a mother and I think in having become a mother Eileen, my protective instinct and my compassion … all of that has exponentially grown. I consider myself a very compassionate person, and that’s not to say that one has to be a parent in order to be compassionate. What I’m saying is for me personally, something was triggered in that. But in this case if there is someone that needs to be encouraged or protected, I am fierce about it! So in this song when I consider the people that I love in the LGBTQ community, my family, my friends, when  I consider my sweet little five year old son, Magnus…and not knowing what he’s going to confront throughout his life in terms of bullying…any of that….I become super fierce about that. So when I’m singing the song I am feeling these feelings about this young man, about Tony. I probably also can remember people when I went to school who were in that situation who were bullied, be it because of their sexual orientation, or be it because of a myriad of other reasons..Who knows, because of their sexual identity, ….or how they looked, or how they dressed, or where they were from. There are unfortunately many opportunities to be marginalized, especially with the LGBTQ community is concerned.

Do you know anyone personally within the gay community who has  experienced a similar issue?

Again throughout the course of my career I’ve had wonderful opportunities, especially through meet and greets, and fan mail, or even now and most especially through social media. You can directly reach out to me, the fans can reach out to the artists and give them messages. We have so many friends who have reached out to us from the LGBTQ community, even before this song, to talk about how much my music has made an impact on them. Definitely now with “Tony” being the new fresh message for people, the response we’ve been getting, you can definitely tell that it has reached a personal note for people. That is powerful for me. When someone says “this really changed my life”, “this experience was mine”, because even if makes one person who may be hurting or considering self harm, if it makes one person feel sane, and loved and empowered, then it has done the job.

I agree with you. I’m from New York and I wouldn’t normally think of a country artist to sing this particular song or a song like that. I feel that you are bridging the gap between country artists and the gay community.

For sure, and you’re not the only one. I think of especially and typically the country community as being much more conservative. I think definitely the demographic can be more conservative, but I think that is such a fantastic opportunity Eileen, for people like me and Kristian, for other artists who are similarly open hearted, similar beliefs, similar themes for them in their lives. At the end of the day you can preach to the choir all you want to but if you’re in the demographic who is already is open and who already has her these messages…..really where the opportunity lies is in sharing messages that may invite people to see something differently and to hear  it differently, and to see it in a more opened way. That I think as a country artist is such a fantastic opportunity to find ourselves especially during these times.

So then, if I ask you the question, can music change the world…..

I think it could do a dam fine job of it, Eileen. I really think in a sense that’s what our art helps us do.it is here to help us prompt this and digest and synthesize all of these crazy feelings and messages, and constant information, and everyone’s screaming at each other on Twitter….it’s Abe ho chamber…. it’s quite corrosive, all of it. It’s very toxic in many ways. So I think that art and music most specifically have a direct line to the heart. I definitely think it could do a good job in changing the world because it can change hearts, and that’s what you’ve got is not.

That’s an awesome answer! I’d like to talk about the tour for a moment, will you be visiting overseas, or is this a stateside tour?

We went over to the UK actually in March. We had three dates over there. We did London, Dublin and then we did  Glasgow. Right now this tour, this summer, we are specifically domestic,  just in the US. We started Memorial Day  and we will be going through Labor Day. We are actually doing two dates in  Canada, but otherwise everything else is in the US. We are not quite halfway through, and will be at it into September.

Is there anything else that you’d like to add that we haven’t spoken of?

I don’t think so other than to say that when I perform this song, and when I see people connect with it, when we start talking about it in the context of, ” Everyone is welcomed at Sugarland”, and what the song is about, and the artist, or when I see someone connect or people that actually have the equality T-shirt on…. when I see the connection I am just so heart warmed, and so moved by that, it makes all of the traveling and everything else worth it. This is what it’s about, touching people …

Are you engaged in any new projects at the moment?

You know what, obviously we have a new record out, it just came out, it’s called “Bigger”. So we’re going to be promoting  that  obviously throughout the summer tour… but outside of that I’ve got some things in the works in the Broadway Community, that I’m not at liberty to fully speak about, but I’m super excited about it. When I do you will be getting the information.