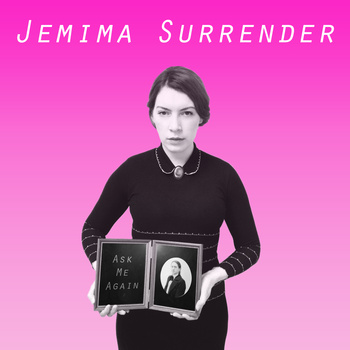 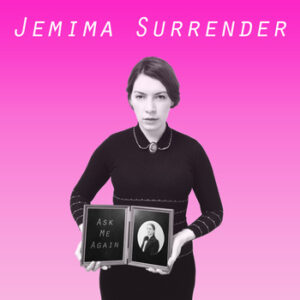 Jemima Surrender make the sort of music that creeps up behind you then punches you hard in the kidneys. Ask Me Again is a collection of four songs of quite brilliant quality.

Millie Phipps and Adam Eldridge create songs with a quite incredible sound. Opener Anathema begins quietly enough, and comparisons to PJ Harvey are valid. Soon enough the song explodes into what is obviously the Jemima Surrender style of ripping fuzzy grunge pop which excites every possible sinew in your body. Once heard, Anathema is lodged in the darkest recesses of your mind, and trust me, it cannot escape.

The aggressive power is continued into tracks Reverse Long Close and My Brother, the latter of which has a unique vocal approach interwoven with some frenetic percussion. For a duo, the resulting sounds are quite intense.

Named after a track by The Band on their eponymously titled album, Jemima Surrender have fine tuned their sound before releasing their first collection of finished tracks, and it is that patience that has clearly paid off. EP closer and contender for song title of the year, If You Sit In A Barbers Shop Long Enough You’re Gonna Get A F*ckin Haircut, slows the pace slightly but still contains the jangly Indie sound that will undoubtedly see them propelled onto higher heights.

Ask Me Again is a superb debut, and one that will hit you immediately right between the eyes. They aren’t scared to make a racket (in fact they probably aren’t scared of anything) and it’s that slightly anarchic punkish approach that is so refreshing. My advice? Buy this EP and play it on permanent repeat until your ears bleed. Then wait for the album.