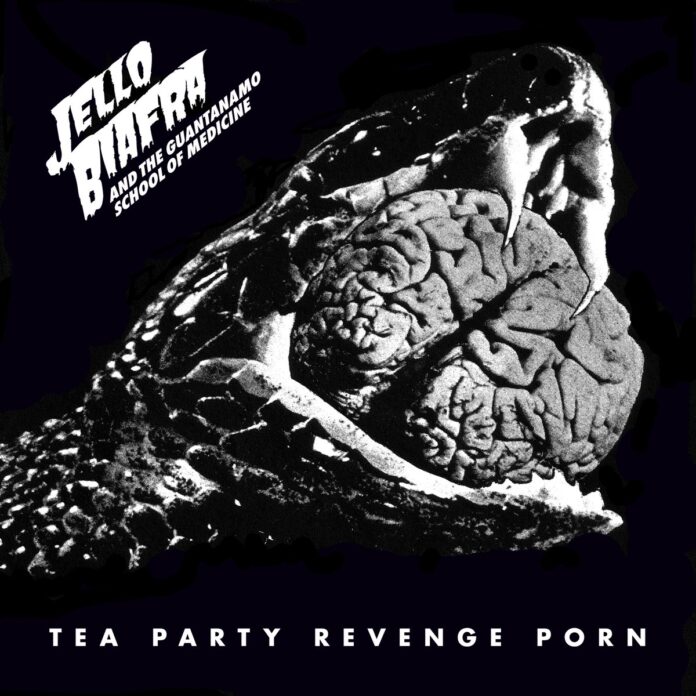 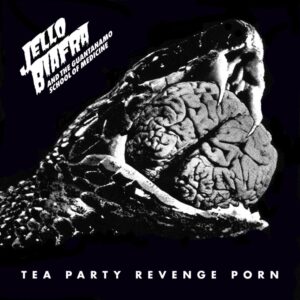 Alternative Tentacles had announced that a new Jello Biafra & The Guantanamo School Of Medicine (GSOM) album would be out in the fall, but they surprised everybody with the sudden announcement that they had dropped the album for streaming and download on October 16th, with a physical release slated for January 2021. Maybe the timing had something to do with a certain election next month…

It’s a sobering thought that Biafra released his first recorded work with the Dead Kennedys 41 years ago. If you were a 16 year old in 1979 buying California Uber Alles, anything 41 years before that date, man, wasn’t relevant. That was 1938, before the Second World War. That’s how old punk is now to a 16 year old in 2020. It’s ancient history, man. Punk musicians from those days, who are still relevant, are hard to find. Rotten became Lydon became Brit institution selling butter, Strummer died and became an icon, Vicious became a poster boy for live fast, die young, whilst in the States The Ramones became a t-shirt. It’s a tough gig being a rock ‘n’ roll rebel who grows up. Best to move onto something else and leave the rebellion to the young. Yet, Biafra still endures, as an iconoclast, still tormenting the stupid (to quote his record label’s slogan). His trick may be his sense of humour, his satire, his lampooning and joy in playing tricks on the pompous and successful. His intelligence and scathing vision has never diminished as he ventured into spoken word albums and collaborations with artists like D.O.A., The Melvins, NoMeansNo and Mojo Nixon, whilst forming bands like Lard and the GSOM.

It was noticeable after leaving the Dead Kennedys that Biafra’s musical output turned heavier, faster and more industrial, as though his anger was growing, not diminishing, with age. That process is continued with the GSOM’s fourth album, and first since 2014’s White People and the Damage Done. That’s not to say there aren’t melodies and cool riffs splattered across the tracks like heads smashed in by police night sticks, but the predominant theme here is heavy, fast and aggressive.

It opens with the sound of hell tuning up in an industrial landscape. The beat is pounding and Biafra’s voice, always one of the most distinctive timbres in music, sounds across a riot torn city like a satirical, taunting voice in the wilderness. The song is called Satan’s Combover. There’s an almost orgasmic shriek of Tweet! Lie! Tweet! Lie! As an opener it pulls no punches. The current line up of GSOM are guitarist Ralph Spight (also Freak Accident), bassist Larry Boothroyd (also Triclops, Brubaker), and drummer/metal percussionist Jason Willer (UK Subs, Nik Turner, Charger, The Mob) and they provide the perfect sound for Biafra to let loose over.

People With Too Much Time On Their Hands has hammering drums, razor edge guitars (at one point sounding like bad wiring electricity surging through the brain making bad connections). It’s a song about conspiracy theory nuts on the internet with too much time on their hands. There’s a sense of paranoia, and of people isolating themselves physically, but connected via the internet with every other nut. This is Biafra in theatrical mode – taking on the persona of the person he is ridiculing – to better ridicule them.

We Created Putin is a history lesson of America’s deceit and greed, all in the name of freedom, which features a Cossack chorus and a reggae dub section. The Ghost Of Vince Lombardi attacks the win at all costs mentality that Biafra has always felt destroys the soul of America. No More Selfies has surf punk guitar and is a plea to stop sticking those goddamn phones in his face and demanding a selfie with the perpetrator. Apparently, this has happened to Biafra when he’s been taking a leak, and even at a funeral for a friend.

Biafra has always been a keen observer of the flipside of America – turning the spotlight on, not just the political machinations and criminality of the ruling class, but the average Joe and the way they are complicit in a corrupt system.

Biafra still relevant? Sadly, we still need his firebrand attack and ability to poke fun at the great and the good more than ever before. And he does it with such intelligence.

Someone has to stand up against the stupid.

You can find Jello Biafra and the Guantanamo School Of Medicine online here, and on Facebook.