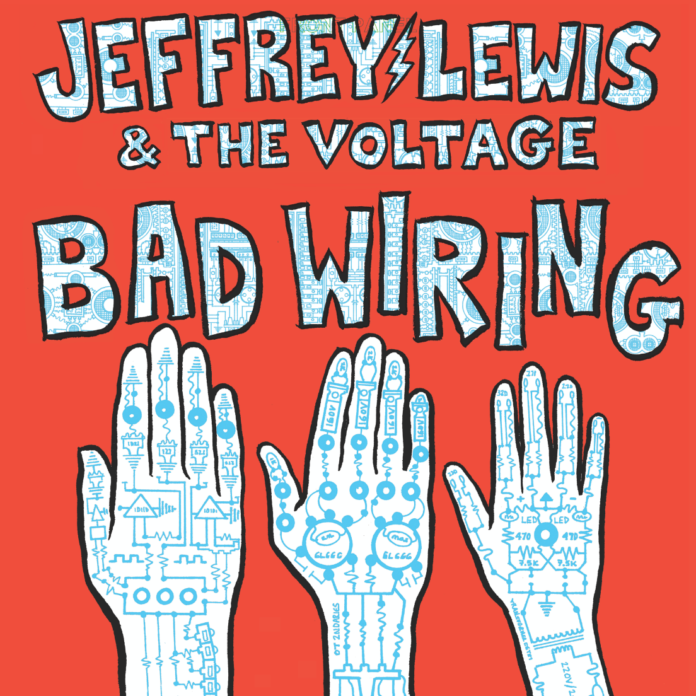 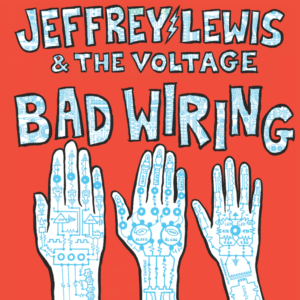 Jeffrey Lewis is the indie artist par excellence. If you want to know how to remain totally independent with a DIY ethic that Crass would be jealous of, then study Mr Jeffrey Lightning Lewis. He records himself, releasing his records individually via labels like Rough Trade and Moshi Moshi, arranges his own tours (often using social media to blag a room to bunk in from fans), sits at his own merch stall before and after the gigs and even has time to create and publish his own comic books (the excellent Fluff series). Of course, it helps that he’s not a little talented, bordering on genius.

Hailing from NYC his recording career now spans over 20 years, firstly emerging from the anti-folk scene of the Lower East Side and the East Village; a scene that was a reaction to the po-faced earnestness of the Greenwich Village folk scene. Lewis soon spread his wings from the strictures that any scene soon imposes, and began mixing up folk, punk, post-punk, psychedelia and anything else he fancied throwing into his own musical gloop.

Whilst clearly in love with the city that nurtured many of his musical heroes and on numerous occasions name checking streets and areas of NYC, where his genius lies is in giving a slant, an off-kilter view on the mundane and everyday. On this latest release, the song LPs, whilst starting off as a humorous look at the addiction of vinyl collecting which snared Lewis in the 90s, it then becomes something else. Now that vinyl is cool again it’s become over-priced so Lewis turns to buying CDs, declaring that ‘What people don’t want, that’s the time to get it.’ It isn’t the format that’s important, it’s the addiction to getting a bargain and discovering new music. Any collector knows that there is a tipping point when the love of music gets lost and you’re happy to buy any shit song if it completes a collection. Lewis reminds us that it’s the song that matters. It’s anti-capitalism writ small.

Bad Wiring, the title of his new album, possibly referring to Lewis’s own battles, often documented in three minute songs, with depression and anxiety – though never in a self-piteous way, but with self-deprecating humour permeating the agony of a no-confidence anxiety. His fans would probably name the album Alternative Wiring or Artistic Wiring. As Lewis once sang many years ago, it’s the ones who’ve cracked that the light shines through. On Bad Wiring he is joined by The Voltage, bassist Mem Pahl and drummer Brent Cole. Whilst the band name may be new (Lewis likes a yearly revamp of the band’s name) the personal aren’t; he’s been touring with Pahl and Cole for the last few years. And you can see why – Pahl’s bass is urgent, driving and at times paranoid jerky whilst Cole’s drumming hits the spot every time, highlighting and respecting the vocals when required.  Between them they give Lewis the rhythm to express himself. And they do great backing vocals.

The album opens with Exactly What Nobody Wanted – a song that could be about Lewis himself, that artist who opens his heart in a new and sometimes disturbing way and is ignored by the buying public, yet inspires other song writers. Recently two songwriters who inspired Lewis have died: David Berman and Daniel Johnston. The song stands as a great tribute to them and to all artists who are prepared to go out on a limb and aren’t afraid to reveal the dark corners of their minds, and be ignored until 50 years after their deaths. Lewis sings that those songs all ‘happened whilst no one was looking’ – which describes perfectly the artist who toils away in the dark.

Except For The Fact That It Isn’t starts with a psychedelic intro before slipping into a pop punk beat. It’s a song about the sudden fear that can strike when everything suddenly seems fine – because it isn’t! And something bad must just be around the corner! My Girlfriend Doesn’t Worry posits the dilemma we all have between political thinking and philosophical concerns with the more domestic and local issues of relationships and work. Lewis worries about global searches for justice whilst his girlfriend thinks he should think about art, friends and their relationship. But the pint of the song is: who’s right? And who has the better life? As charity begins at home, shouldn’t philosophical thinking too? It builds up beautifully into an existentialist stream of a scream. And a clever way to introduce political thinking. I can’t think of any other 4 minute song that includes Mao Tse-Tung, Charles Manson, confidence, sexiness, peasant revolts, agrarian culture, the emptiness of human existence, delusions, misery, and trying not to talk about all this because your girlfriend would think it’s annoying.

Till Question Marks Are Told has a laid-back vibe, like a city waking up, sunlight streaming through the grime and the pollution whilst Knucklehead/Happy Rain is a short blues interlude with rain in the background. Take It For Granted has a jaunty pop beat, wishing for those moments when things can be taken for granted, rather than worried about. Lewis sings: It’s not a good fire if you have to continually fan it. In Certain Orders is held together by a really cool bass line running over great drum work, though the songs meaning eludes me somewhat.

There is a melancholy to Where Is The Machine, with its bottleneck guitar groove and wistful lyrics wishing there was a machine that could fight emotions. Machines can do everything else, and emotions are just feelings, so why can’t the machine fight them? As the song relates machines can do everything to do with logic and other machines, but they can’t help us be human. Dog Of My Neighborhood is a song about not needing to own a dog because he knows all the dogs in his neighbourhood. Lewis has the artist eye to observe, so he knows all the names of the dogs where he lives, and their habits. It doesn’t have to be that you’ve owned something in order to know about it, or experienced something to have empathy for it. It’s a riposte to materialism where nothing has value unless it’s owned. Or it’s a song about dogs.

Album closer, Not Supposed To Be Wise, is a philosophical treatise on how we are heading down, not up, on the evolutionary scale. It’s an easy listening vibe that posits that we are just stumbling along and everything that leaves just dies. Everything wise has to make room for more stupid stuff. The antipathy of the notion that we are progressing to some god like Nietzschean state. It would appear that getting wise is a crime against nature.

Lewis uses often jaunty rock/pop tunes in opposition to the darker lyrics. What holds it up is not his geekiness, but his clear insightfulness; and a skewed way at making us look at life in a new way. It isn’t weirdness for the sake of it – it’s a guy who is trying to express himself from the heart with as little fakery or artifice getting in the way as possible. It’s an honesty that avoids childishness and innocence and bitterness – a very neat trick. His songs are invariably cleverly observed small moments of life. He’s a beautiful anomaly in the modern world and we should treasure him whilst we have his lo-fi, DIY, intricate songs that hold up mirrors to ourselves and the world, with an ability to highlight things that appear obvious once he’s pointed them out to us.

Jeff Lewis sits comfortably with Lou Reed and Leonard Cohen as an exemplary songwriter. Reed always strived for street cool and Cohen’s words were imbued with mysticism and his love of women. Lewis has the courage to open up his heart and lay out all the horrible neurosis, paranoia, and despair that we all fall prey to.

Reed the cool, Cohen the mystic and Lewis the honest. A better triumvirate you couldn’t hope for.