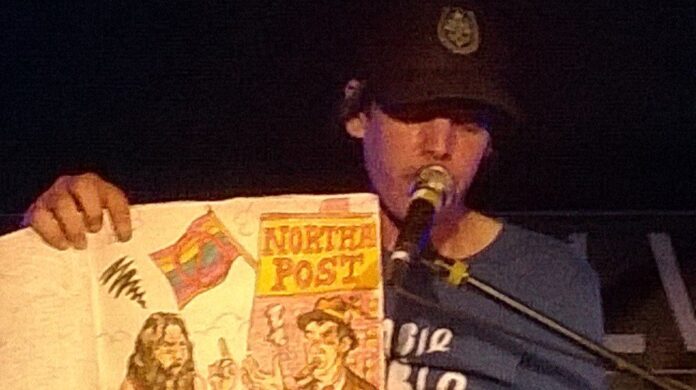 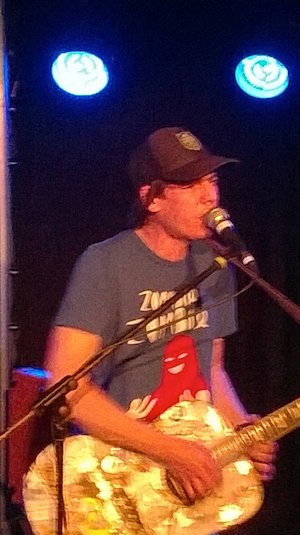 The Cult Boyfriend himself, one of the greatest living Americans, visits Hampshire. Ged Babey is struck dumb in the presence of a genius.

Now that Lou Reed has gone, I would say that Jeffrey Lewis is the new Poet Laureate of New York City.

Although in many ways he is the complete opposite of Reed, a sensitive poet/comic-book geek rather than a sometime boorish rock’n’roll animal, they share a literary inclination and their authorial voice addresses the individual rather than the crowd.

Jeffrey also has something of the Jonathan Richman about him but perhaps only superficially in that they both sometimes sing about girls and other times about animals and insects.

Jeffrey is a multi-faceted hero though from his autiobiographical comic book series, a fascination with the history of Communism, his music, a collision of folk protest, avant garde, shambling pop, lo-fi garage rock and a mixture of naïve, confessional and absurdist lyricism.  Underpinned with an underlying love of the Fall and Sonic Youth (he’s midway through a written project called Sonnet Youth – turning all their songs into sonnets!) his myriad influences, from Lou and Jonathan to Leonard Cohen and Woody Guthrie, make him a unique artist.

He surrounds himself with like minded collaborators and bands like the current one the Jrams. It’s only right that they are both women as Jeffrey completely lacks any machismo (“Going bald is the most manly thing that I will ever do…” he once sang). He is a reedy voiced gent and mummys boy hippy child geek made good. He doesnt have any trappings of cool hipsterdom and has always been an outsider in the music industry. “Don’t Let the Record Company Take You Out To Lunch” he sang and the recent wwprd (What Would Pussy Riot Do?) lambasts and names and shames Beck and Best Coast for colluding with the advertising world.

He really is the real deal, a genuine outsider genius & indie-punk-anti-folk superhero disguised as an ordinary nerd-next-door.

I like to meet rock stars I like, say hi, chew the fat, blow smoke up their asses maybe and so on. I usually say something stupid by way of introduction and make a dick of myself.  Confronted with Jeffrey Lewis, behind his merch stall at the Railway, I went unusually shy and avoided eye contact. I didn’t want to talk to him. He is such a hero, I just don’t want him thinking I was a dick, not that I thought he’d be a disappointment. I had met him before when he played Hamptons in 2009. A gig where he had offered to drive a fan & her daughter who’d missed her last train, home. “Basingstoke is on the way to Bristol right?” He had said , knowing full well it was in the opposite direction. 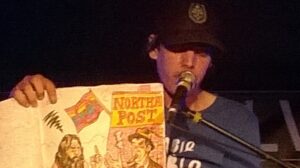 He is is the most affable, friendly, down to earth cult hero you can possibly have and he deserves the love and respect his audience have for him. He’s happy to chat and its the same laid back but fiercely intelligent guy that’s onstage as off.

It was somehow a kind of ever evolving greatest hits set, with Jeff taking requests from the floor, secure in the knowledge that people would ask for Back When I Was 4 and songs from the Crass covers album. There was a great new song about his love of British food, the aforementioned What Would Pussy Riot Do?, a beautiful version of Roll Bus Roll among psychedelic workouts and gentle oldies like Alphabet.  This was such a warm, intimate show and not even England losing to Uruguay on the big screen in the front bar could spoil it.

What pleased me the most perhaps was that the audience was seventy five per cent young people. (I go to far too many gigs full of fellow old kunts …) So there is hope, in the world of music, that there is a new, young audience for cool, talented, intelligent, commie singer songwriter geniuses! That makes me happy, like the sometimes sad, but always inspirational work of Jeffrey Lewis; a Lou Reed for this and future generations.

All words by Ged Babey and snaps by Oliver Gray. Some better pics can be found here on flikr by George Ping and I hope Johnny Hamster doesn’t mind me sharing the above snippet from the gig, a history lesson …