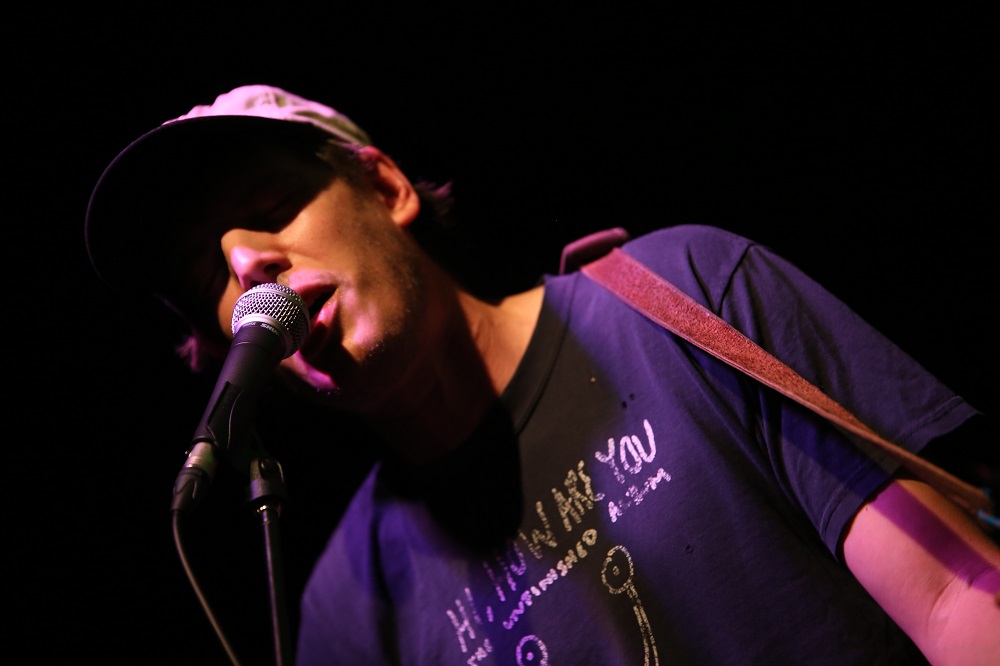 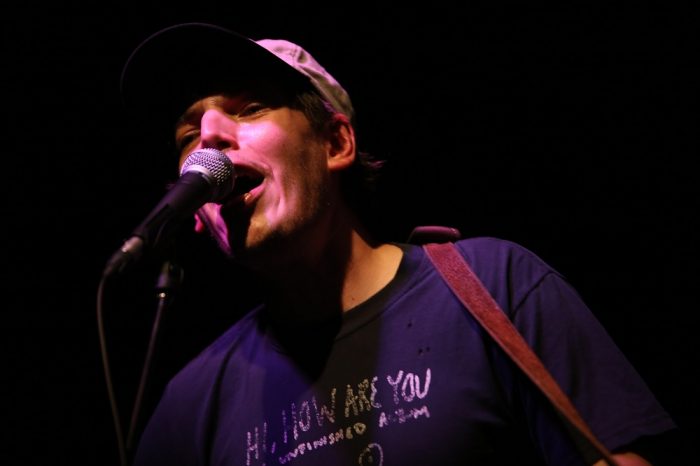 When a platinum selling artist like Ben Gibbard says you are ‘hands down’ his favourite contemporary songwriter then you must be pretty darn good and Jeffrey Lewis certainly is that.

This native New Yorker polymath is one of those rare artists who can effortlessly pretty much turn any part of his life into top quality pop songs which would be the envy of most artists. Lewis seems to be continually on the road and this time out he has the on it Los Bolts – including his brother Jack – to give the songs some texture.

Scowling Crackhead Ian recalling a boyhood mate certainly benefits from the full band treatment as Lewis plays early videogames with an unstable junkie who thinks nothing of holding a knife to his throat.

Lewis is also a critically acclaimed cartoonist and last time he was at this venue he had tatty paper copies of his work, but has upgraded to a PowerPoint which works better as everyone can see his work on the big screen. Lewis decided to treat the crowd to the latest version of his history of the Cuban revolution in cartoon form, but as he pointed out in this socialist members club people would probably want to get into the finer details of his entertaining romp through the life and times of Fidel and Che.

If nothing else his shows are unpredictable so he decided to do the always funny The Pigeon unaccompanied. His surreal take on Edgar Allen Poe’s The Raven is reinvented into an elderly man kvetching about a pigeon who has taken up residence in his Lower East Side apartment. It is both bonkers and hugely funny much like Lewis himself.

Bands writing about how awful life on the road is really boring as musicians dodging real life is usually a huge turnoff, but Support Tours is a moving account of the trials and tribulations of getting support slots with bigger bands in order to build your career as the old model of album/tour/album/tour and repeat has collapsed in the digital age. Who really fancies paying someone to join a tour when pretty much no-one will watch you?

Lewis offers a frantic opening to Sad Screaming Old Man telling the tale of an old bloke who he once lived next door to who screamed his way through the night. Lewis describes it as’ like trying to live in Guantanemo cell block’ before the song comes to a similarly frantic end.

Roll Bus Roll is part travelogue and part touring war story, but does offer the good tip for frequent travellers that ‘a rolled up sweatshirt makes the window soft.’ You do live and learn at a Jeffrey Lewis gig.

The whole surreal night rounds off with another cartoon show featuring a whole cavalcade of pretty piss poor superheros including one who seems to just be a head in a cowboy boot. No, me neither.

In a sane world Jeffrey Lewis would be filling stadiums like his acolyte Gibbard, but back in the real world it is always a genuine pleasure to see a unique artist offer his singular worldview up close and personal.

You can find more about  Jeffrey Lewis at www.thejeffreylewissite.com