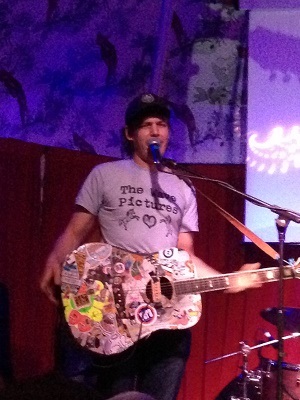 Jeffrey Lewis and the Jrams

Jeffrey Lewis and his band bring their ramshackle and beautiful noise to Manchester. Louder Than War’s Paul Margree was there.

The last time Jeffrey Lewis appeared in this august organ, our reviewer had no compunction in crowning the lo fi scallywag as Lou Reed’s natural successor as punk poet of the New York streets.

It’s not an unreasonable comparison, to be fair. Lewis’s obsession with the grimy minutiae of the NYC streets and the syllable-crowded lines of his punk-folk ballads are points of similarity, psychic tendrils sending art rock nuggets back through time from underneath the weathered carapace of art-rock’s very own Grinch into Lewis’s still-beating rock and roll heart.

Lewis is an avowed fan of Reed and he reconnects with the old grump again tonight, opening this sold out show at Manchester’s Deaf Institute with a tender cover of Tell It to Your Heart, a gem from 1986’s Mistral. It’s a lovely version, one that brings out the tune’s melodic lyricism far better than the lumpy rock gestures of the original production.

The differences in these two versions highlight the divergences between the two artists, rather than the similarities. For Reed, in his recordings anyway, personal details were always second to the creative process. Even in the supposedly ‘personal’ records – Transformer, Coney Island Baby and Magic and Loss, for example – the art always came first.

With Lewis, on the other hand, it’s the other way round. He makes his everyday travails part of the warp and weft of his songwriting along, of course, with all manner of thoughts about a baffling array of subjects. This musical helter-skelter is often kept fairly controlled on his records, but in a live context things are always more a little more unhinged with songs, anecdotes and ad-libs all tumbling out like some kind of rolling stream of consciousness journal or social media feed.

Tonight we get a slew of tracks from Lewis’s latest record along with favourites from across his career, a couple of covers – including a brisk race through The Fall’s Cruiser’s Creek – as well as a couple of his hand-drawn films (part 6 of an ongoing history of Communism and a biography of countercultural hero Alan Moore).

What Would Pussy Riot Do is rendered as a three-voice punk thrash, its call for artistic integrity greeted with howls of approval from the sweaty throng. There are plenty more highlights – a homage to British Food, a horror story about an old man in the apartment next door to Lewis in New York, a breakneck run through Cult Boyfriend and a poignant version of Time Trades, to name but a few.

It’s the kind of wild and whirling mix that makes for a great show and the crowd, which seems to be made up almost entirely of Jeffery Lewis obsessives, lap it up, feverishly hollering along to classics like Williamsburg Will Oldham Horror and forming a massed choir for Roll Bus Roll.

Nevertheless, Lewis and his band, Caitlin Gray and Heather Wagner (aka the Jrams) – keep things pretty tight throughout and, despite the lack of a set list, stay good humoured through some early sound troubles. It’s the kind of telepathy you get having made a record together and toured pretty extensively, I guess, but the free flowing nature of the ensemble is a world away from the alienating play-it-like-the-record perfection touted by most indie-rock buzz-bands these days.

By the final tune – a monologue about birds and their singing, which is surreal even by his standards – Lewis, the band and the crowd seem like a single organism, united in a joyous celebration. As soon as it is finished, however, Lewis is off, jumping off stage to crew the merch stall where he is surrounded by the beaming faces of adoring fans. Another night, another celebration of the genius that is Jeffrey Lewis.