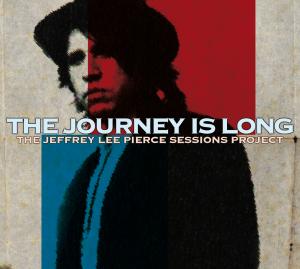 The Jeffrey Lee Pierce Sessions Project is set to follow up 2009’s acclaimed ”ËœWe Are Only Riders’ collection with a second volume of the late Gun Club leader’s previously-unreleased works-in-progress, brought to life by old friends, collaborators and acolytes.

Take a quick look at the featured artists, Jeffrey Lee Pierce clearly had one of the most sought after address books!

Many of the songs started as nascent ideas captured on a cassette unearthed by Pierce’s latter day collaborator Cypress Grove while clearing out his loft. Harking back to the collective ethos of Pierce’s beloved jazz, artists spill into each other’s tracks; re-interpreting or finishing lyrical and melodic sketches while some chose personal favourites from his catalogue.

“The idea was that, these are not our songs, we merely interpret them,”Â explains Cypress Grove. “This is not a tribute project, which usually consists of third rate re-treads of an artist’s most famous work, but brand new material from beyond the grave. In some cases the artists have had to finish the songs, so there can be no nonsense about this not being as good as the original version as these are the original versions! It’s a musical collective of artists who have come together to interpret or complete skeletal, unfinished material by Jeffrey. Where possible we have used Jeffrey’s contributions, so he actually appears posthumously on this album.

“Also, many of the artists appear on each others tracks, like a true collective, so it is not merely a series of individual tracks. For Example, Warren Ellis appears on the Nick Cave tracks, but also plays with Lydia and Bertrand Cantat. Lydia Lunch sings with Tex Perkins and Barry Adamson, as well as doing her own track. Barry plays bass on Lydia’s track and Nick Cave’s ”ËœThe Breaking Hands’, and so on. I like to think of it as being like Josh Homme’s The Dessert Sessions.”Â

Pierce and his ever-changing Gun Club line-ups poured America’s roots music forms into a blender of hard drugs and liquor, wrenching the udders of America’s bloated cow to spew out toxic, low-life hollers and swamped-up songs of love and desperation.

He seemed to have located the dark main artery of the blues, loaded up an overblown hypo and set the plunger to permanent stun as first the group released seminal eighties classic albums including Fire Of Love, Miami and The Las Vegas Story, then later solo works such as Wildweed and Ramblin’ Jeffrey Lee & Cypress Grove. Jeffrey was infamous for his hard-drinking, drugging and hell-raising, dying from a brain haemorrhage in March, 1996. Since then, his influence has been increasingly acknowledged on musical forms like blues-punk and Americana. Those who knew him all have a tale to tell, seeing the Jeffrey Lee Pierce Project as one way of marking their affection and memories.

The album is set to be released on the 9th April on German label Glitterhouse on both CD and double vinyl, with an accompanying 20 page booklet featuring memorabilia and extensive liner notes by Kris Needs.
Proceeds from the first volume went to Amnesty International, but Pierce’s sister Jacqui is setting up The Jeffrey Lee Pierce Foundation to help fulfil her brother’s long-standing desire to provide musical instruments for under-privileged kids in LA.

A third and final volume called ‘The Task Has Overwhelmed Us’ is already in production for release later in the year.