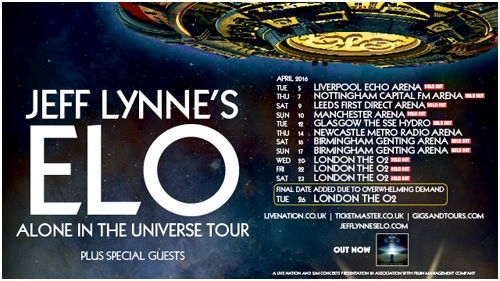 Jeff Lynne’s Elo continue their triumphant return to the UK arenas with the first of four nights at the O2. Louder Than War’s Craig Chaligne reviews.

Jeff Lynne’s tentative return to the stage two years ago at Radio one’s Festival In a Day in Hyde Park in front of 50000 people set the wheels in motion for a for a full blown comeback, that now includes an album of new material entitled “Alone In The Universe” and a full European tour plus an appearance at Glastonbury. Billed as Jeff Lynne’s ELO, the band is comprised of Jeff and his long time piano player Richard Tandy. They are backed by Take That’s musicians placed under the supervision of musical director Mike Stevens, a well-oiled unit that cannot be faulted in the execution it gives of the Lynne songbook. After Roy Wood’s departure from the band in 1972, Lynne gradually pulled the band away from it symphonic rock beginnings towards a more pop orientated sound, while retaining some classic elements and early rock’n’roll stylings. This approach would result in the band conquering the American airwaves and cement them as one of the decades biggest acts.

After a opening set from The Feeling that saw them play a selection of their hits plus a couple of numbers from their recently released 5th LP, ELO came on stage to perform a perfect greatest hits set. A bit less grandiose in its execution than in their seventies pomp (no flying saucer descending on the stage this time), the show nevertheless benefited from a nice screen in the backdrop and some clever floor lighting on the stage that enhanced the musicians nicely. After an instrumental intro, the curtain hiding the band was dropped and the band launched into “Tightrope” from 1976’s “A New World Record” album followed by “Evil Woman” and “Showdown”, both songs proving how recognizable Lynne’s songwriting style is. The hymnesque “All Over The World” from 1980’s soundtrack to the movie “Xanadu” was a rare excursion into the bands eighties catalogue as was 1983’s “Secret Messages” from the album of the same name. The recently released “Alone In The Universe” was represented by its two best tracks, the Lennon-ish “When I Was A Boy” and the energic pop rocker “Ain’t It a Drag”. However Lynne knew what he audience had come for and he gave it it in spades playing hit song after hit song: “Telephone Line”, “Can’t Get It Out Of My Head”, “Wild West Hero” all delivered in his trademark yearning voice. The biggest cheer was reserved to the tracks from the “Out Of The Blue” Double LP, with “Mr Blue Sky” garnering the most plaudits and “Turn To Stone” being a close second. The bands disco period wasn’t completely forgotten with an excellent rendition of “Shine A little Love” and their rollicking cover of Chuck Berry’s “Roll Over Beethoven” was an apt show closer.