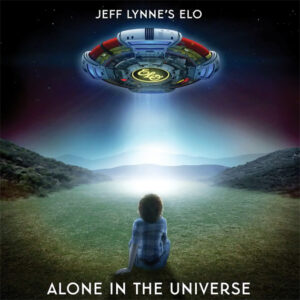 Jeff Lynne is back in fashion. Is ELO’s new album his best release in three decades ? Louder Than War’s Craig Chaligne reviews.

For once we can thank Chris Evans for something. One can only speculate if this album would ever have seen the light of day without Evans’s constant lobbying for Lynne to return to live performances. Lynne’s headline slot at the BBC Radio 2 “Festival in a Day” last year in Hyde Park certainly proved to the Birmingham born songsmith that he still had a healthy audience in his homeland. After the undeserved flop of the “Zoom” album in 2001 and the cancellation of a planned US tour, Lynne had retreated into production work for most of the decade. The basics of a return were thrown together in 2009 with the joint release of “Mr Blue Sky, The Very Best of ELO”, a collection of solo rerecordings of some of ELO most famous tracks and “Long Wave”, a collection of covers from the 1950’s  that influenced Lynne while he was growing up. The recently released “Alone in the Universe”, far from being a return to the symphonic sound of Elo’s seventies heyday, is a continuation of the style Lynne has been ploughing since he originally disbanded his band in 1986. Well crafted pop songs accompanied by a production that you recognized from the first note (ah that snare drum sound). Is the album good: yes it is. Is it the best thing he has put out in three decades as most reviews are implying: no it’s not. “Alone In The Universe” is as good as “Zoom” and “Zoom” was certainly a match for his 1991 solo LP “Armchair Theatre”.

“When I Was A Boy” opens the record on a strong note with a piano intro very reminiscent of a peace anthem written by a former Beatle (we’ll let you guess that one). It is the best track on the record and compares pretty well with the two Beatles tracks Lynne produced in the mid-nineties for the Anthology project. The rocker “Ain’t It A Drag” is the other highlight with its plethora of instrumental and vocal hooks and it includes the immortal line “When you think it’s cool, the shit hits the fan”. “Alone In The Universe”‘s only fault is that it contains maybe a bit too many ballads, some of them not tremendously memorable (“All My Life”, “When The Night Comes”, the title track) and that it’s missing the delightful rock’n’roll re-writes that Lynne peppers his album with (“Easy Money”on Zoom being an example). The gentle “I’m Leaving You” with its Hawaiian sound feels like it could have been lifted straight from “Armchair Theatre”. “One Step at a Time” harks back to the days of the “Discovery” album with its steady beat and falsetto vocals on the chorus and “Love and Rain” sounds like a continuation of “Showdown”. The limited edition contains two pleasant, the refreshing “Fault Line”, two minutes of gentle rockabilly (if that actually exists) and the Roy Orbison pastiche “Blue”. A fine return by Lynne.