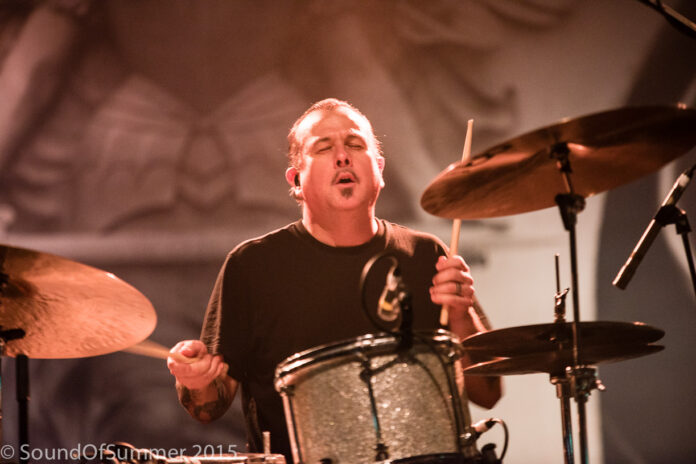 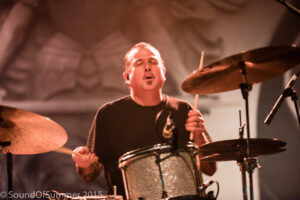 “Trying to make every show and every record the best we have ever done” is the glue that has held Clutch together for a quarter century with essential the same line-up. So says Jean-Paul Gaster, the heart of Clutch’s rhythm section.

It was a real privilege to catch up with Jean-Paul just before Clutch went onstage for their sound-check before the hastily rearranged gig at London’s O2 Academy, Brixton.  The show had been moved from the Shepherds Bush Empire after that venue had to close for urgent structural work.  The move was something of a blessing in disguise as it gave around twice as many people the opportunity to see one of the most engaging and enduring bands in rock music. 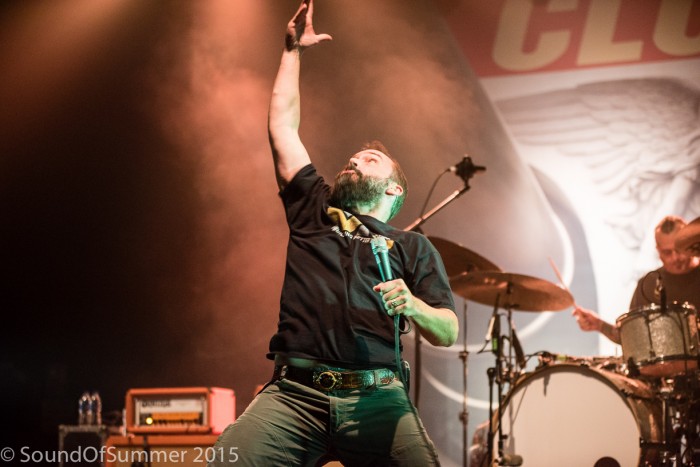 Jean-Paul was relaxed, engaging and open as we chatted about the current tour, recent album releases, the bands influences and how after 25 years in the business Clutch are turning out some of their best ever material.

As this was the final night of the Clutch tour I asked how things had gone as the band traversed Europe.

Jean-Paul said “this has been a fantastic tour.  We can’t believe how much Clutch has grown as a band in Europe over the past few years.  The last five years have been incredible for Clutch we seem to be playing to bigger and bigger crowds every time we tour, both here and in the states.  Clutch have gotten used to a kind of small incremental growth but that has kinda exploded in the last few years it’s crazy.  We love touring in Europe and can’t wait to come back.”

Thankfully for European Clutch fans they will be back in Europe for the festival season next summer but contractual obligations stop them from announcing which festivals they will be playing just yet.

I asked Jean-Paul how things had gone with their support acts, Swedish metal outfits Bombus and Greenleaf.

“Those guys are great, great bands and great guys.  It’s hard to get people to come out to see live music so we try to put together a great package.  Of course we want people to enjoy seeing Clutch but we want people to come to our shows and see a variety of music, we want them to go away at the end of the night thinking they have had fantastic value for their money.” 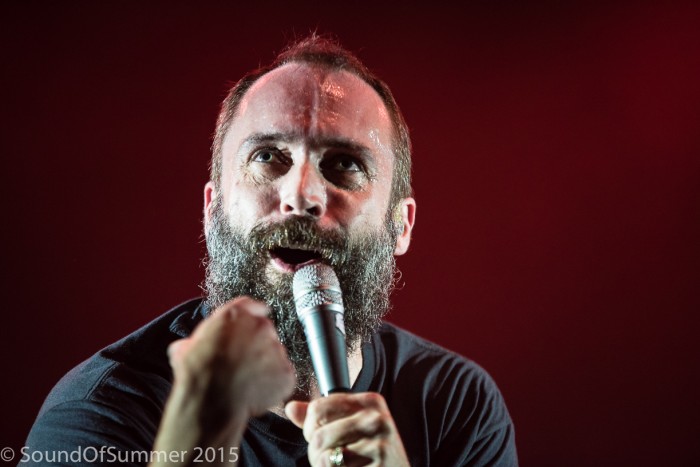 It says something about the work ethic that Clutch have that when I asked what was planned to celebrate their 25th anniversary as a band Jean-Paul replied:

“Nothing special, more touring, business as usual.  When we started Clutch that was the intention, we wanted to play good shows and make good records. I see us doing the very same thing next year, it’s what we love doing.  When we started out we looked up to bands like Fugazi and the Bad Brains and the Obsessed.  They weren’t filling arenas and we looked at them and said ‘Ok lets go out, work hard and play good shows’.  It was never designed to be a commercial endeavour, we just wanted to be a band and fortunately we have been able to create a good career out of it.  This is the best job in the world.  That is what kept us together when things were not going so well and we were facing adversary, dealing with labels or whatever.”

I put it to Jean-Paul that there is a sense of fun in their music as lyrically there is always something tongue-in-cheek comments in Clutch songs.

Jean-Paul says “absolutely, we try not to take not to take ourselves too seriously, it is rock ‘N’ roll after all.”

As any Clutch fan knows the band are now totally independent and Neil Fallon is on record as saying they would never sign to a big label again.  I was interested to know how this affected Clutch and how they felt about streaming services.

” Well until recently Clutch only had a small part of our catalog available to stream.  We are fortunate enough to have total control over our last sic albums.  Clutch have made a point to keep that very much to ourselves.  We have not streamed Psychic Warfare [the most recent album] but may do so in the new year.  The rest of our catalog is now available to stream.  We will take another look at it in about a year and see how the numbers stack up, I see the streaming services sort of becoming labels in their own right and that may not be good for the artist.  Artists already get pain little or nothing on streams.  These services need to be more fair to the artists.”

Jean-Paul is certainly not dismissive of streaming services but as record company owners Clutch favour physical media, merchandise and touring.  In that Clutch are very much in tune with the mainstream rock music audience. They also realise that it is now incredibly difficult for new bands starting out and trying to forge a career. 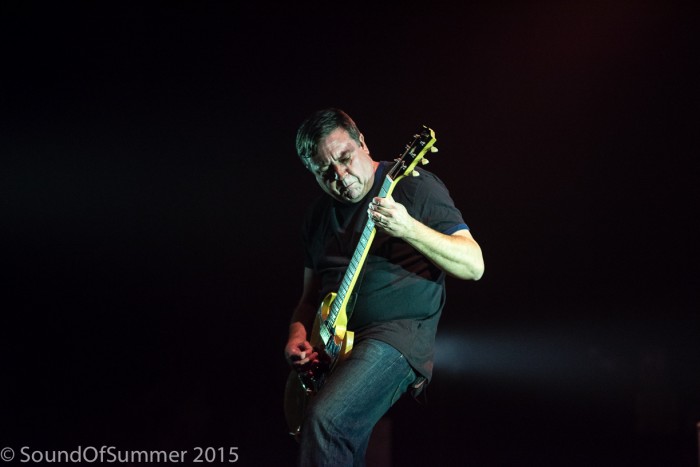 Turning to the business side of running their own label I asked Jean-Paul how much extra work and pressure that put on the band.

“Well, obviously it does mean extra work but we have a great team working for us.  When we get together to make business decisions it is now so much easier than when we had to negotiate with a label, that can be really frustrating.  It’s actually a lot of fun now and pretty easy to do.”

I was keen to know how after 25-years in the business Clutch have managed to release some of their very best material with the last two albums.

Jean-Paul said: “with Earth Rocker we were very focused on what we wanted to do, we thought that there was a lack of straight up rock ,n, roll happening.  We had just finished touring with Motorhead and Thin Lizzy and were so inspired by those guys.  They lit a fire under our asses. We were searching for the direction we wanted to take this thing so that was a very important record in a lot of ways.  We learned so much and we able to take those lessons into Psychic Warfare.  I think we became better songwriters and I think we learned how to sequence an album better in terms of how the songs relate to one another.”

I asked Jean-Paul how they went about creating such a mix of styles on recent records.  To my ear at least they give a huge nod to John Lee Hooker and the Delta Blues and to Thin Lizzy on Earth Rocker.  I wanted to know how these sounds melted together to become Clutch songs.

If you are a long-term fan of Clutch you will be aware that their songs often contain “off the wall” lyrics and I wanted to know where these came from.  A great example of this comes in “Decapitation Blues” from Psychic Warfare where Neil sings about getting kicked in the neck by a three-legged mule.

Jean Paul laughed and said “yeah, I was pretty shocked when I heard that as well.  Neil writes all the lyrics and he has this amazing ability to file away odd happenings, things he sees or hears and then they find their way into a song.  In my mind Neil is the most talented lyricist in Rock ‘n’ roll today.  It is my job to record our demo’s and so on.  When I record Neil’s vocals and hear them for the first time I still get goose-bumps every time. It is so exciting to work with someone so talented and it is something we don’t take for granted.”

Jean-Paul accepts that the Clutch sound has evolved from the early days.

“This comes from touring so much, playing our instruments so much and working together for such a long time.  We have learned what works live for our audience, that’s something we are more in tune with and something we try to take into the studio with us.” 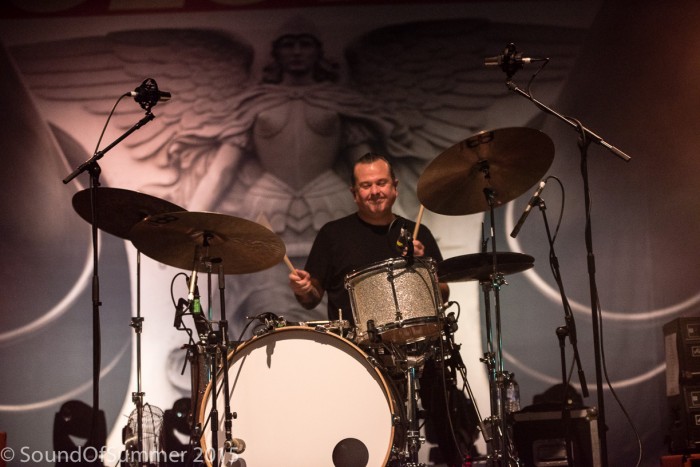 Of the current crop of rock bands Jean-Paul says that he really enjoys the new releases from Swedish Doom Metal outfit the Graveyard and Mastodon both of whom toured with Clutch in the USA earlier this year.  Both those bands have a sound that is unique to themselves and whilst they are very different from each other you can hear the roots in their music.  They are exciting because they  don’t try to hark back to the glory days.  You can hear the roots but they are doing their own thing.

We finished up with Jean-Paul telling me that Clutch will be back in the UK next summer to play some festivals that they are really  excited about.  For contractual reasons they can’t reveal which festivals they will be as yet, let the guessing begin.

On a personal note I would like to thank Jean-Paul for affording me so much of his time and for being such a pleasure to talk to.  Thanks also to Kirstin at Cosa Nostra PR for making the arrangements.