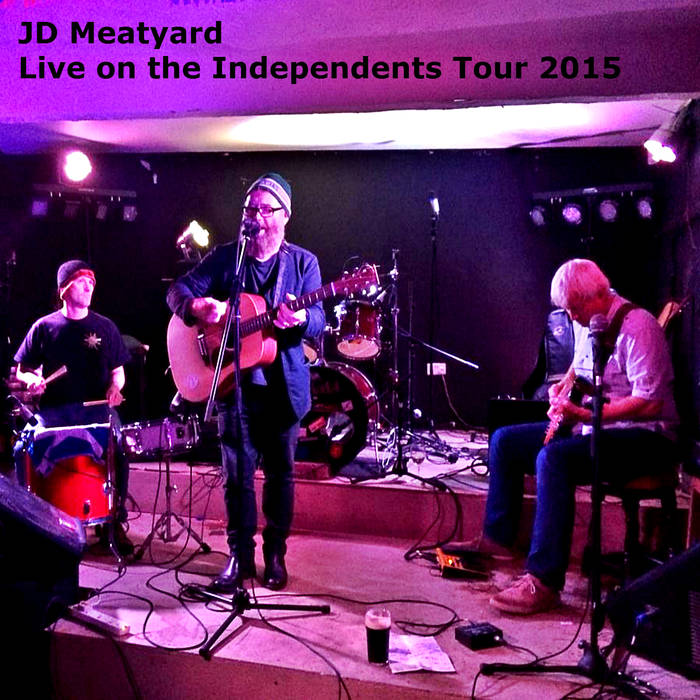 Thatcherism is characterised as having inspired political lyrics and rebellious music. In contrast, musicians during the age of austerity are seen as producing music devoid of political engagement. Of course, such a representation is a nostalgic simplification. JD Meatyard offers proof that thrilling, visceral, directly political music is still available for those wishing to scratch beneath the surface. While last year’s collection, ‘Taking the Asylum’, had been John Donaldson’s most understated and reflective album, his live performances as captured on this release see him in ferocious form.

Dating back to his earliest releases with Levellers 5, John’s recorded output has not reflected the astonishing nature of his performances where his songs provide a solid platform from which he can develop a stream of consciousness and the sense that confrontation is imminent. This recording perfectly captures the experience of a JD performance.
Rabble rousing opener, “St Peter at the Gate”, sets the mood with digs at politicians, bankers, Tories, bailiffs and Rupert Murdoch, together with mockery of his own Catholicism. He provides a running commentary, pointing out that in Sheffield the Tories in the audience left at this point which is understandable as his songs are direct and leave no room for misinterpretation.

“Jesse James”, sounding like a frenetic Velvet Underground, points out that Iceland gaoled their bankers and contrasts this with Britain’s approach. “Taking The Asylum” expresses bemusement at lifestyles displayed in the media – “dress your kids in thongs and high heels/and you say that I’m strange/you go to the gym to get big muscles/and you say that I’m strange.” Warmongers are told to “get on their horse and fight their own wars” and Blair gets a tongue-lashing. One of his two Festive 50 entries, “Northern Song”, a tale of bailiffs knocking on the door, is soothed by Tamsin A ’s backing vocals balancing John’s harsh style. Throughout his career, he has worked with some more technically-focused musicians which helps maintain a sense of contrast. At the start of “A Political Song”, he rebukes long-term collaborator, Steve Lindley: “I’ve always got a proper musician telling what I’ve done wrong. They’re a pain in the arse.”

While John’s voice is ideally suited to channelling rage, it also effectively conveys regret. Not all the content is political vitriol, “Sorry Song” is deeply personal but goes way beyond the conventional wishy-washy singer-songwriter in the way he expresses remorse to his parents, siblings, ex-wife and children, but he can still digress to tell the audience, “don’t laugh, this hurts.” In “Standing on the Shoulders”, tribute is paid to his musical heroes – Pixies, “a hip priest in Salford”, Jonathan Richman, Don Van Vliet and many more – together with an acknowledgement that “we work through the veil of the already spoken.”

The concluding “My Space Star”, apart from illustrating the danger of referencing an online platform which can quickly sound outdated, is his most deliberately humorous song with its references to “pictures of last night’s gig with my mouth wide open” and being online friends with dead rock stars. However, the punchline is that musicians do not make a living from downloads.

To rectify this, get a copy of ‘Live on the Independents Tour 2015 #3’ from here. You can find JD Meatyard online at: www.jdmeatyard.com. He is also on Facebook.

All words by Andrew Neal. More from Andrew can be found at his Louder Than War author archive. He tweets as @AndrewNeal66.